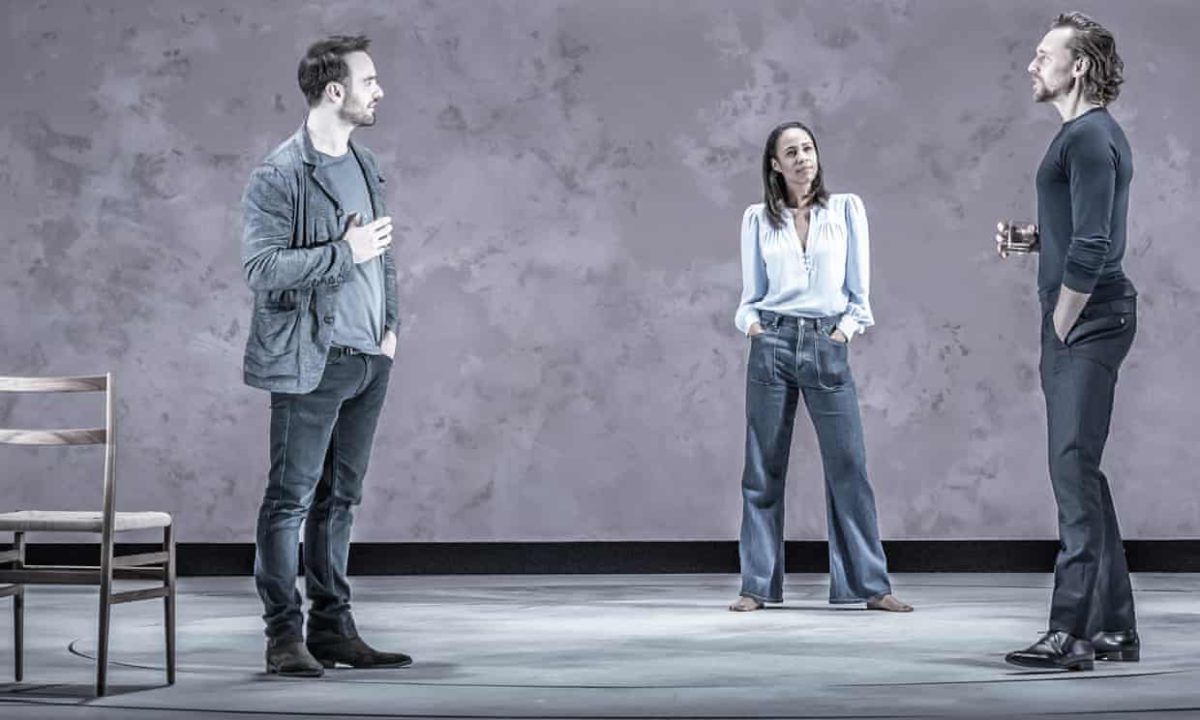 Charlie Cox as Jerry, Zawe Ashton as Emma and Tom Hiddleston as Robert

Last revived on Broadway in 2013, in a production starring Daniel Craig, one now sees how differently the role can be interpreted.  Handsomely, Craig brought the passion of Othello to the role. But Hiddleston, the Marvel Film hero (Thor, etc.), is anything but a shape shifter here. He is single mindedly in control of his every move, and more importantly the emotions – whatever they are – beneath his firm and silent demeanor.

As his best friend, and rival, Charlie Cox’s Jerry is such an amiable, and friendly companion, one can hardly find anything to dislike about him. Where Robert is sternly self-commanding, Jerry is relaxed; and while Robert is very sure of himself, Jerry is confident without stressing. In effect, Jerry is perfect. Still youthful, in service of his middle-aged success, he’s handsome, metrosexual, and worldly beyond conceit.

Similarly, Zawe Ashton’s Emma is an icon of physical perfection, unusually tall, and slender. Her flawless beauty captures our gaze, but her sense of quest feels vapid, especially to her. Put them all together on a single set with a rotating disk in the middle of the stage (Soutra Gilmour, designer), and you have a three-person theater piece that plays like chamber music.  Beautifully well-paced, the production averts any perception of the characters as fully human, or fully realized.

Their relationships are calculated like the mechanics of the rotating disk on stage, and manipulative in the way adultery is. But for a long term marriage, such deliberate and controlled behaviors also express a determination for mutual survival. This revival is also very sad in that way.

Mulling beneath the surface lies a sense of disappointment, sadness, and loss.  The mess of betrayals, revealing innate hypocrisy, and the fear of facing one another is bewildering, and omnipresent.  With all of the characters on stage throughout, we also watch them, painfully watching each other.

The contemporary staging, with its evocation of industrial design, flies on the heels of Pinter’s sparse use of language, telling pauses, and resonant silences. So do Gilmour’s costumes – one costume per actor for all of the scenes, regardless of where and when they take place. There is a relentless monotone to that.

It leads us to that which lies between the lines. A betrayal of self, and fidelity to one’s self, speaks loudly here.  Things stay the same, the status quo isn’t altered, but there is something missing, something not stated but distinctly present that is revealing about all three relationships. It’s certainly revealing about love, middle age, and the fear of what is to come.