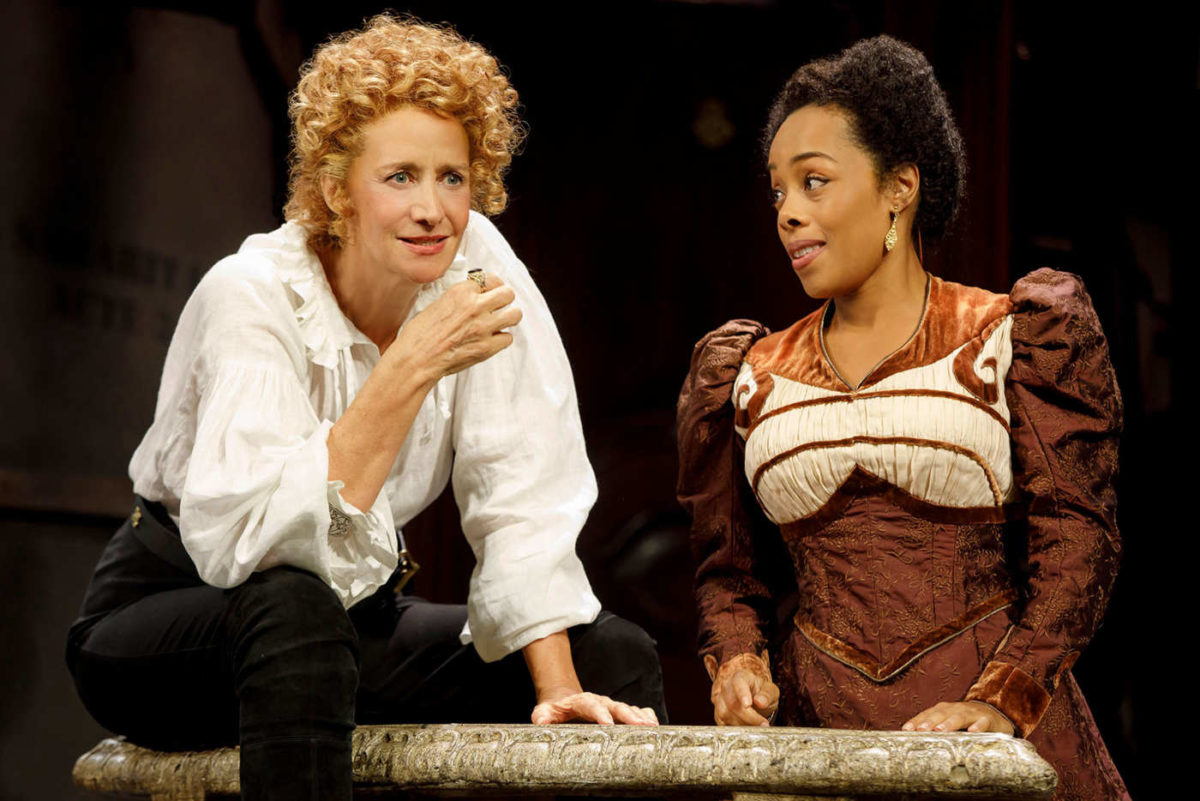 Onstage Bernhardt played in such French classics as Phèdre and Ruy Blas, as well as works by such contemporary playwrights as Edmond Rostand and Victorien Sardou. Offstage she slept in a coffin, accumulated a menage of notable lovers and was a staunch supporter of Alfred Dreyfus, a Jewish officer falsely accused of betraying his country. This led to a year-long rupture with her anti-Dreyfus son, Maurice. Bernhardt performed almost until her death, a good number of those years on one leg, after an injury led to gangrene and amputation.

The play is set in Paris, in 1897, when the 53-year-old Bernhardt (Janet McTeer) is taking on Hamlet onstage and Rostand (Jason Butler Harner) offstage. Although there is a great deal of talk about various critics’ opposition to a woman in this iconic role, as Bernhardt is producing, there is no real possibility of anyone stopping her. And despite Bernhardt’s incessant pleas for Rostand to leave his wife and young children, it’s quite obvious that, notwithstanding his infatuation, the playwright has no such intention.

With very little real conflict or drama going on, Rebeck resorts to giving McTeer a huge amount of stage time in which Bernhardt analyzes the role she is about to inhabit, something the famously melodramatic actress in pre-Stanislavski times would hardly undertake. Nevertheless, McTeer is magnificent as she struts back and forth, giving Bernhardt youth and vitality, if not very much depth. However, no one would ever believe her Bernhardt is either French or 53 years old (this is something of an achievement, as McTeer is actually several years older than Bernhardt would have been at the time).

Eventually, dissatisfied with the translation of Hamlet she is using, Bernhardt commissions Rostand to give her a new one.

Things pick up in act two with the entrance of Maurice, (Nick Westrate, who adds charm and humor) and Rostand’s wife, Rosamond (Ito Aghayere, who brings in much needed genuine emotion). Now it turns out that Rosamond not only knows about Rostand’s affair but also realizes Bernhardt’s demands have taken her husband away from his masterpiece, the future Cyrano de Bergerac.

This is a wakeup call for Bernhardt. She reads the play and immediately recognizes its potential, although she is not happy the role of the female lead, Roxane, is so poorly developed. Which brings us back to the play’s main argument: no wonder Bernhardt wants to play Hamlet! As Bernhardt announces in one of the play’s many zingers, “A woman who can’t do anything is nothing. A man who does nothing is Hamlet.”

One cannot argue with Rebeck’s premise. One can only wish she’d written a better play.