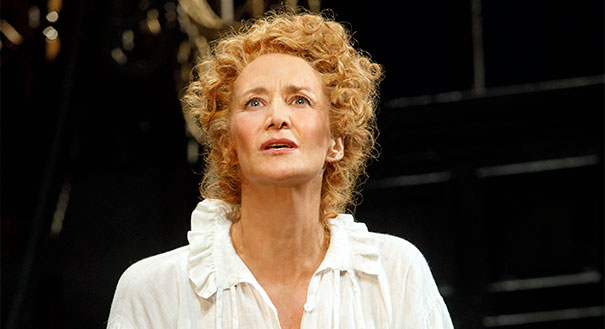 The Rebeck work should be celebrated because it affords a vehicle for the magnificent Janet McTeer as the Divine Sarah. This is an opportunity to see one of the greatest actresses of her generation playing one of the greatest actresses of all time. The French Bernhardt was regarded as the most sensuous, theatrical performers of her day, the late 18th century into the early 20th. She was one of the few actresses in the world to have her own company. The play captures her as she approaches the age when ingenue roles are no longer quite suitable and mature parts are not challenging enough. She dares to take on the Melancholy Dane to consternation of male critics and the shock of polite Paris society.

According to contemporary reports, Bernhardt’s technique was breathtakingly artificial, beautiful and unashamed in its theatricality. (Of course, this was decades before the Method and realism in acting were regarded as the height of artistry.) McTeer is simultaneously grand and naturalistic, combining the best of the era of the play and the age in which it is presented. Her smoky voice, her tall, willowy frame and her expressive features are the perfect instrument for a feast of tour de force moments. She makes every line of dialogue—whether Rebeck’s or Shakespeare’s—seem as if it is being spoken for the very first time. Whether teasing a lover, sparring with his wife, searching for the meaning in a soliloquy, or figuratively or literally fencing with her adult son, McTeer’s Bernhardt is a giant, passionate soul, brought to life by an equally colossal performer.

The play itself provides numerous pleasures including several entertaining backstage hijinks staged with wit by Moritz von Stuelpnagel (Beowulf Borritt’s dark, wooden Belle Epoque set and Toni-Leslie James’ exquisite period costumes add to the theatrical atmosphere). But it doesn’t hold together. Rebeck’s central theme is Bernhardt challenging the male status quo and refusing to be confined to syrupy melodramas like Camille because of her gender. But the playwright sabotages her own message of female empowerment by building the arc of her plot around Bernhardt’s romance with the playwright Edmond Rostand (a sleek Jason Butler Harner) and whether or not he will adapt Hamlet into a less poetic script in order for the star to shine brighter. (Rebeck’s heroine is dependent on a man.) In addition, we never find out the fate of her Shakespearean production which is supposedly the focus of the whole play. The show ends with Rostand dropping the adaptation to finish his masterpiece, Cyrano de Bergerac and Bernhardt’s transgender Dane yet to open.

Individual sequences to savor include Dylan Baker and McTeer exploring the subtext of the Ghost scene; McTeer jousting with an implacable Ito Aghayere as Rostand’s clever spouse; McTeer drunkenly holding forth on art, sex, critics, and her rival Eleonora Duse in her gorgeously appointed dressing room (kudos again to designer Borritt). As indicated by the preceding list whenever McTeer is off-stage, the enterprise suffers. Fortunately, that is not very often.

In The Nap, the commendable Ben Schnetzer plays another kind of artist from a world totally different than Bernhardt’s, but he’s equally purist. He’s enacting Dylan Spokes, a British champion snooker player who refuses to “bust a frame”—that is, to purposefully lose a round of the pool-like game—even if his mother may be killed by bad guys with big money riding on the match. While Bernhardt/Hamlet is a loose patchwork of scenes, Nap is a tightly-knit caper thriller. By the way, the title does not refer to an afternoon snooze, but to the pile of fabric making up the surface of the snooker table, as in a rug or carpet. As he did in One Man, Two Guvenors, playwright Bean weaves together a bizarre cast of characters and outlandish story strands, creating a tremendously satisfying whole.

Recounting the complex plot would spoil the fun. But a quick inventory of the loopy dramatist personae and their individual quirks will give you an idea of the madness in store. There’s Waxy Bush, a transgender gangster with an artificial arm and a penchant for using the wrong word. She’s sort of a post-modern Mrs. Malaprop with homicidal tendencies, played with hilarious zest by trans actress Alexandra Billings of Transparent. Let’s not forget Dylan’s working-class mom and dad, Stella and Bobby, a riotous Johann Day and John Ellison Conlee, who look like they’ve escaped from the Jerry Springer set. Dylan’s manager, is another brightly colored cuckoo (Kaye Voyce did the eye-popping costumes), constantly on his mobile phone and spouting indecipherable slang, energetically embodied by the hilarious Max Gordon Moore. Then there’s Stella’s new Irish boyfriend (a delightfully slimy Thomas Jay Ryan) who associates every event with a recent movie, but he can never remember the title. Into this daffy melee burst a pair of mismatched investigators (pompous Bhavesh Patel and alluring Heather Lind), each with their own agenda concerning Dylan’s prospects. Director Daniel Sullivan hits just the right tone of contained insanity and arch cynicism. David Rockwell’s grimy sets have the right lived-in feel and the antiseptic championship stage is appropriately high tech. The staging and script could have veered into excessively violent Martin McDonagh territory, but Nap stays within the bounds of credibility—just—and lands its snooker balls expertly into each comic pocket.