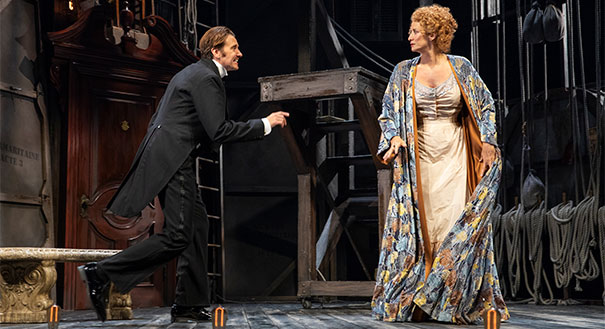 And all the more so when, in Rebeck’s new play, the theatrical world rains misogyny on the most famous actress of the day. That was, in part, the reception Bernhardt received in 1899, when at the age of 55 she became the first woman to play Hamlet.

Not only did she play the role in a French adaptation, she also played it in London, and in Stratford. She even made the movie. No small roles, or small actors for Bernhardt!

Bernhardt’s ambition to play Hamlet unfolds here, side-by-side with her love affair with the minor French writer and playwright, Edmond Rostand. As a matter of fact, the stage door to her theater is plastered with a poster of her in his play La Samaritaine.

In modern times, ideally, women would find more subtle ways of enforcing their will. Still, Rebeck makes the most of the volatile interplay between the two. The masculine side of the woman, and the feminine side of the man– in Jungian etymology, the animus and the anima – are fundamental concepts vigorously explored through their relationship.

Indeed, a large part of the second act is about Bernhardt’s quandary over playing Roxane in Cyrano de Bergerac, a role Rostand (Jason Butler Harner) wrote for her, according to his wife, Rosamond. In that role, Ito Aghayere is convincingly smooth, vulnerable, and coy.

But the argument between the playwright and the actress is very much to the point of this play.

EDMOND: Roxane is the embodiment of female perfection.

For fans of the television series, Ozark, it’s a wonderful opportunity to see two fierce opponents – the FBI agent (Harner) and a representative of the Colombian drug lord (McTeer) face off. The two actors ignite wonderfully here.

But more importantly, the historical setting is colorful, and evocative of the outpouring about women’s roles today. As directed by Moritz von Stuelpnagel, McTeer achieves her #MeToo moment fairly early in Act II. “Of course he loved me in Camille!” she tells us. “All the men love the beautiful whore who is there to adore the prince and remind him of feeling and passion, then renounce him and conveniently die so he doesn’t have to sully himself with tawdry melodrama anymore, when he needs to marry and pass on all that money to children who are, you know. Unsullied.”

Indeed, Rebeck’s play is based on historical characters. Dylan Baker is astonishingly comic and chameleon, as the prominent French actor, Constant Coquelin. In the role of Alphonse Mucha, the artist who became famous for his portraits of Bernhardt, Matthew Saldivar occupies himself tirelessly in her employ. And Nick Westrate suitably portrays her doting, spoiled son Maurice. In this play, as in history, Sarah Bernhardt reigns!

Set amidst the bones of the stage, Beowulf Boritt’s design makes us feel like we really are in the guts of it all. And Bernhardt’s dressing room, with her collection of artifacts from around the world, is enchanting – an appropriate signature for a woman who was known to be truly exotic. Similarly, Toni-Leslie James costumes of both periods are character revealing, in and of themselves.

It’s in the shaping of a woman’s history that this story unfolds, ambitiously of course.