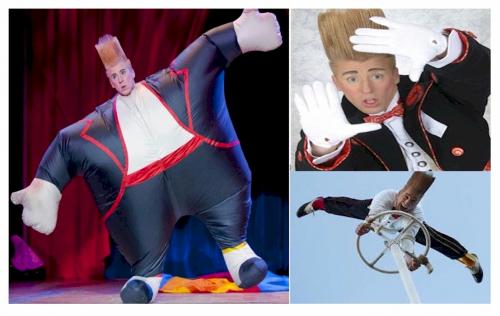 Bello Mania features aerial acts, mystifying magic, and more, including awe-inducing crowd favorites like topsy-turvy tricks, high wire hijinks, and, of course, audience participation. But only Bello climbs to the perilous top of the 44-foot steel sway pole
to the delight and screams of audience members.

“I’m thrilled to bring this new show back to the New Victory,” states Bello. “It’s an honor to perform in this historical theatrical and intimate gem.  In addition to some of my signature stunts, there’ll be a slew of surprises!”

“I’ve never been one to follow the norm,” he says. “I don’t expect up-and-coming performers to do the crazy sort of stunts I do, but my hope is to inspire new generations to find what makes them unique and push the boundaries of what they can offer to this wonderful art form called circus.”

An honorary New Yorker, Bello’s unique connection to the city is drawn from his appearances in nail-biting stunts, such as hanging by his gigantic clown shoes from a helicopter flying across New York Bay and over the Statue of Liberty, walking a high wire from the Koch Theatre to Geffen Hall at Lincoln Center, and rappelling off of Madison Square Garden. In 2013, he entered the Guinness World Book of Records for the first ever high wire walk over a cruise ship at sea.

He’s worked the great circuses of the world and in 2007, as a Ringling Bros. and Barnum & Bailey Circus headliner became the only person in the company’s history to have a production named after him, Bellobration. Bello is also known and loved from several seasons with New York’s home-grown Big Apple Circus.

Bello, who speaks seven languages fluently, adds, “My goal is to entertain and amaze children of all ages with a unique blend of comedy and thrills.”

He’s achieved his goal! To oohs, aahs, wows, giggles, and gasps, Bello performs risky trampoline mayhem, trains invisible dogs, rides the world’s smallest bike, does edge-of-the-seat [his and audiences’]; then, for the grand finale, greases up that pole to dangle
over audiences.

Bello has amazed over 40 million people worldwide over the last decade. In addition to his Drama Desk nomination for Unique Show, accolades have been heaped upon him: Youngest person ever inducted into the Circus Ring of Fame, Monte Carlo’s coveted Silver Clown and Switzerland’s Gold Lion; France’s Prix Special twice; and, among numerous others, the Walt Disney Award for Creative Entertainment.

People are always mystified that during all his madcap adventures, there’s never a hair out of place, to which Bello jokes, “It must be the Viagra in my shampoo!”

Bello Mania is a family affair. It’s co-written and directed by wife Jennifer, with daughter Amariah as stage manager and daughter Annaleise, who’s following in her father’s footsteps to become an eighth generation performer born to a family of daredevils, ballerinas, equestrians, and opera singers. She set a Guinness world record when she completed four somersaults on the Wheel of Wonder over 60
seconds, the first female ever to successfully attempt the feat.

Bello designs and constructs his stunt riggings, such as the Double Wheel of Steel and the Aqua-trap, his its seventh production for San Diego Sea World San Diego. Most recently, he was a producer for Rock ‘n Roll Hall of Fame inductee Cheap Trick’s Dream Police Live.

The ageless daredevil clown was born Demetrius Alexandro Claudio Amadeus Bello Nock in Florida, in the family that founded Switzerland’s Circus Nock in the 18th Century. He’s been performing since age three when he was the baby on the burning House  in Disney on Parade’s Dumbo’s Circus. At 6, Bello toured as Michael Darling in Peter Pan, starring Cathy Rigby. Bello first captivated audiences high up in circus tents at 15, performing routines on sway poles with his family troupe, the Nerveless Nocks.

The show, 90 minutes, including one intermission, is recommended for everyone ages 5 and up. Tickets are $10, $13, $18 or $25 for New Victory members. Full price tickets start at $15. Purchase online (NewVictory.org), by telephone (646) 223-3010) [service fees apply], and the New Victory  box office. Theatergoers buying tickets for three or more New Victory shows qualify for free membership benefits, including discounts, unlimited ticket exchanges (up to 48 hours in advance), and access to a first-look purchase period for added performances.