June 3, 2022: History can be a hard taskmaster when it comes to writing plays about it. You have to draw a fine line between the historical facts, even when you have to alter them for dramatic purposes, and the human story you tell within those circumstances. Anachronisms will inevitably crop up, but you must at least make it seem likely that people might have used such language, or done such things. And, of course, the history you’re writing about should have something powerful to say for a modern audience. 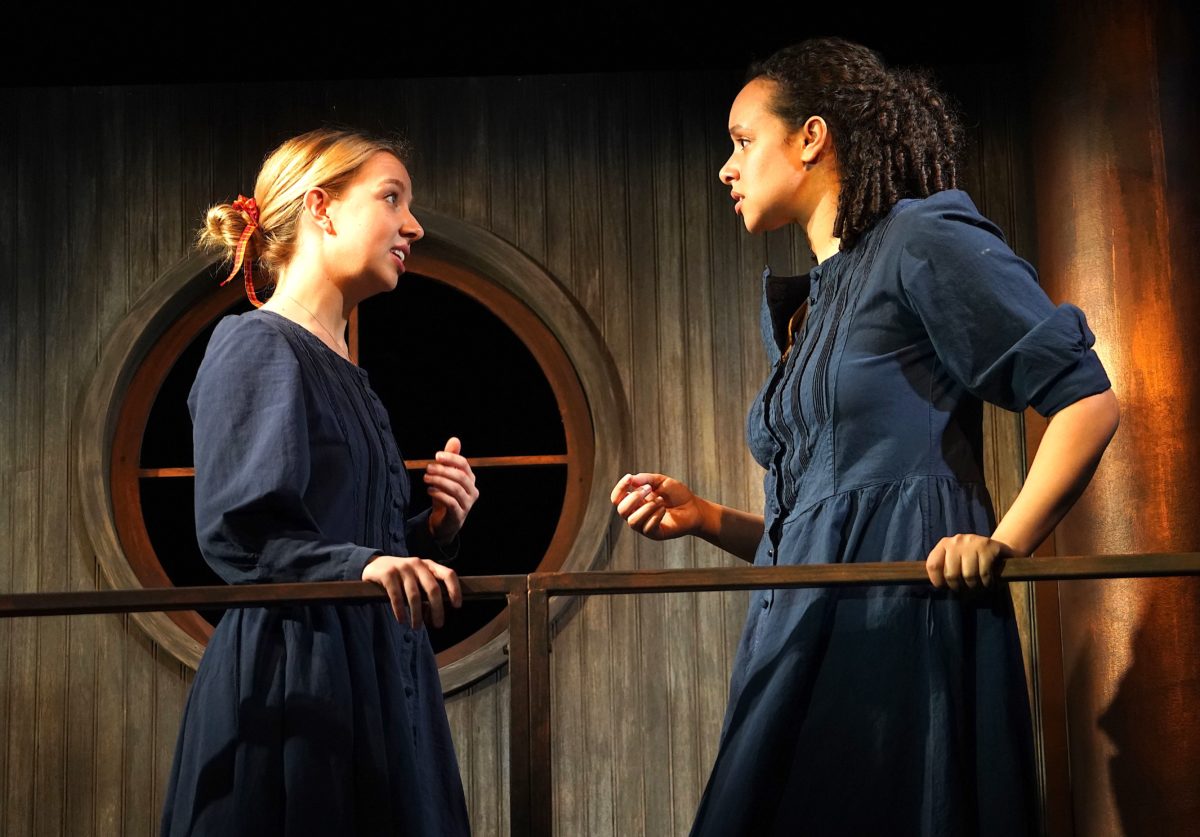 June 3, 2022: History can be a hard taskmaster when it comes to writing plays about it. You have to draw a fine line between the historical facts, even when you have to alter them for dramatic purposes, and the human story you tell within those circumstances. Anachronisms will inevitably crop up, but you must at least make it seem likely that people might have used such language, or done such things. And, of course, the history you’re writing about should have something powerful to say for a modern audience.

Such concerns were surely on London-born Irish playwright Jaki McCarrick’s mind when she wrote Belfast Girls, an interesting if talky, melodramatic, and overlong (two hours and twenty minutes) drama about five determined women emigrating by ship on a months-long trip from Ireland to Australia in 1850. Their journey was part of the Orphan Emigration Scheme of the 1840s, cooked up by Lord Early Henry Grey, British Secretary of State for the Colonies, during the “Great Starvation” or “Great Hunger” famine of the 1840s, which may have killed 1 million people. Grey’s idea aimed both to take the pressure off Ireland’s overflowing workhouses and to offer women for marriage (to Englishmen) or work in the Australian colonies. Perhaps 4,000 such women sailed away as part of the scheme. Overall, around 2 million people left Ireland or died during the famine, cutting its population by one quarter.

Belfast Girls, developed in London, given its US premiere in Chicago in 2015, and often produced elsewhere, is now at the Irish Repertory Theatre, in a fierce, if somewhat overstated, production directed by Nicola Murphy. It’s set entirely aboard a ship called the Inchinnan, for which designer Chika Shimizu has provided a simple but effective windowless cabin with bunk beds below, and a railed outside landing above. Michael O’Connor’s gloomily atmospheric lighting works well on the gunmetal walls.

The play explores the dreams, ambitions, and traumatic pasts of five poor, feisty, and defiantly profane Irish women who, forced to abide in a claustrophobic space, clash, often violently. Ultimately, however, when they arrive at Sydney, they merge into a unified group focused on a better future. Dominating the women—each provided by China Lee with period-appropriate outer and underwear (lots of the latter)—is the volatile, brown-skinned Judith (Caroline Strange), of Jamaican and Irish parentage. She seeks to inspire the girls to take advantage of the opportunity to take control of their destiny.

One girl, Hannah (Mary Mallen), was sold into prostitution by her needy father. Sarah (Sarah Street) is a country girl; Ellen (Labhaoise Magee), formerly a prostitute, shares an attraction with Sarah for the ship’s cook; and Molly (Aida Leventaki), the only one not from Belfast, is from Sligo. Surprisingly, this one-time maid brings a socially aware, feminist perspective to the scene, citing Shakespeare, Marx, and Engels. As one might also expect in a modern play about five women confined to a single room, the possibility for at least one same-sex relationship is never far away. Whether it has to be explicitly represented is another matter.

In act one we slowly learn who these women are and why they’re on this journey, with long expository sections and, understandably, little physical action. We gradually discover each woman’s secrets and lies, many not precisely of the “morally pure” variety requested by the authorities. The atmosphere is fraught with tension, but it isn’t until act two that the stage becomes energetically alive as a storm rages, and the characters throw up or go flying about in precisely choreographed sequences. Further, the evolving situations several times require someone to take a knife to the throat of someone else. No one, of course, bothers to hide the cutlery once this cutthroat behavior commences. Throughout, Caroline Eng’s superb sound design of offstage voices, crashing waves, ship’s bells, roaring winds, and so on, is a helpful supplement to the action.

Nevertheless, the performances on the tiny stage are pitched at such a highly theatrical level, and the violence is so palpably artificial, that the production, while it kept me awake, failed to make me willingly suspend my disbelief. This kind of physical business simply works better on the screen than on the stage.

On the other hand, I’m probably in the minority when I wince from hearing the anachronistic, f-bomb dropping language spoken by these women. Even if Irish women, whether as coarse as these or not, didn’t spout such curse words, they’ve become a convention of period dramas on stage and screen, regardless of their rarity in premodern parlance.

All the performances are strong, forthright, and colorful, adorned with the authentic Irish accents you invariably hear at this bastion of the brogue, but none, for me, were able to break through the veneer of artificiality the play imposes. I was happy to go along with the history lesson being taught, but not so much the emotional journey on which it sought to take me.