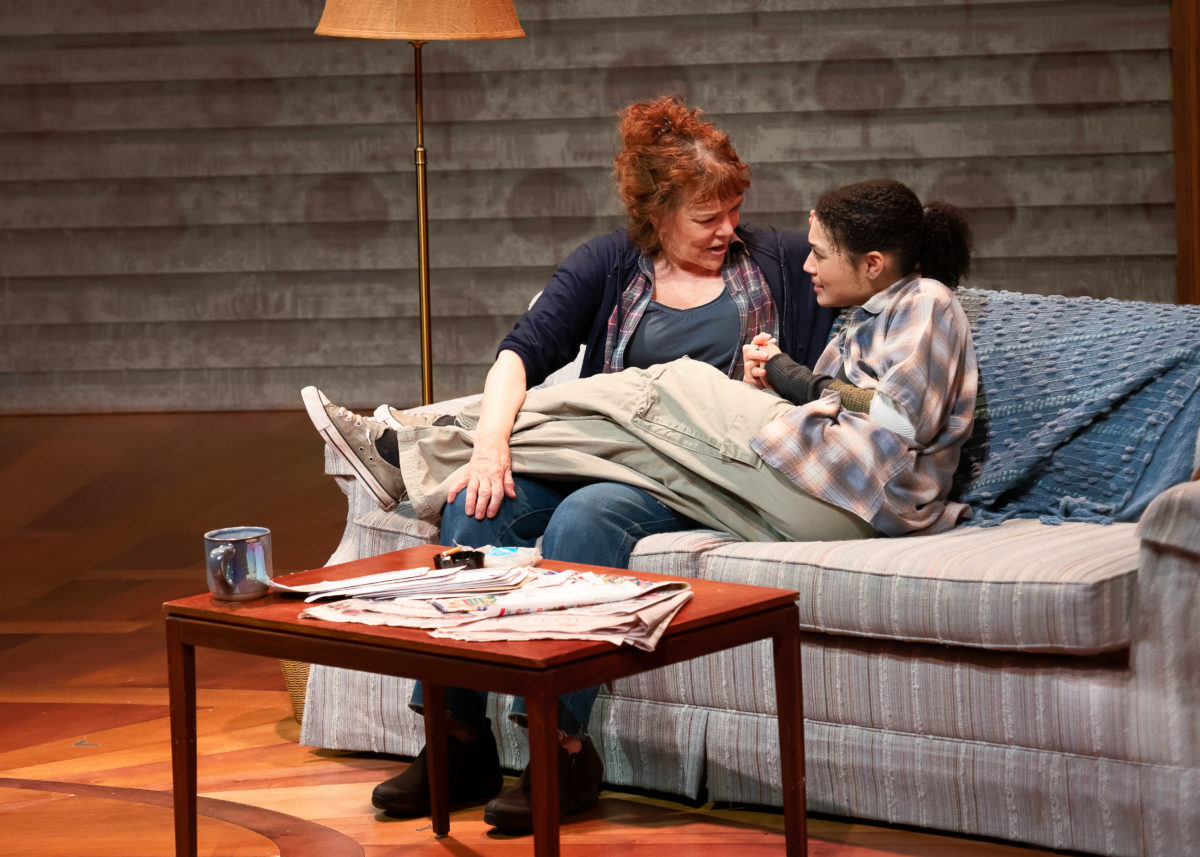 What especially intrigued her about the latter was not so much its familiar theme of McCarthyism (one of those modern political developments that fostered the metaphorical use of “witch hunt”), but something she heard from another young playwright, Branden Jacobs-Jenkins, after she told him that the Crucible production she’d seen revealed that the witch business “had been redirected toward girls’ desires for older married men.” Jacobs-Jenkins responded that the true subtext grew out of Miller’s own marriage being endangered by the playwright’s lust for the much younger Marilyn Monroe. It also came as a shock for Ruhl to learn that the historical Abigail, the teenager who tempts John Proctor in the play, was only eleven, not Miller’s nubile seventeen-year-old.

With these and other historical discoveries in mind, Ruhl had the hook to write her play, which is largely set in modern Salem (not the actual Salem Village where the events took place), where 62-year-old widow Becky Nurse (Deirdre O’Connell) is a tour guide in the local witchcraft museum; witchery is, in fact, the city’s principal tourist attraction. She is particularly qualified—despite not having a college education—by being the descendant of one of the accused witches hanged at Salem, an old lady who, it’s alleged, couldn’t defend herself in court because her poor hearing prevented her from understanding the magistrate’s question.

But Becky is a troubled woman. Not only did her daughter die of opiate abuse, she too is an addict. She’s having considerable trouble raising her 15-year-old granddaughter, Gail (Alicia Crowder), herself a victim of psychological problems, including seeing friends die of drug abuse. Becky makes flailing attempts to prevent Gail from carrying on with a seventeen-year-old Wiccan named Stan (Julian Sanchez), who wears black nail polish and eyeliner. Becky’s also lonely, with the hots for a local bar owner, Bob (Bernard White), a married man she’s loved since they were, for a time, high school sweethearts.

Becky is a bit of a mess, a bright but angry woman with a propensity for dimness, like when she tells a group of Catholic high school students during a tour that Arthur Miller wrote The Crucible because he wanted to “fuck” Marilyn Monroe, a claim made often enough to form a leitmotiv. This is not the kind of thing you want to say when your job is your only source of income and health insurance, and you have yourself and a teenager to support; nor do you steal the life-size wax statue (an eye-catching prop) of your ancestor from the place you work for. Bob, for example, can do little but remind her of her propensity for shooting herself in the foot.

So Becky is fired by her supercilious boss, Shelby (Tina Benko). Crushed by a truckload of problems, Becky turns to a local witch (Candy Buckley) for help, and soon, with potions and rituals, things begin looking up in the romance and parenting departments. It isn’t long before Becky’s in the clink for some minor infraction, she can’t access her pills, and she falls through a “pinhole” in history where she becomes her accused ancestor at the Salem trials.

Ms. Ruhl wants to look again into the trials to make a point about men taking advantage of women (underlining the fact that 14 women and only one man was hanged), so we get plenty of hocus pocus about Rebecca Nurse, while the connection to the present is strengthened when the usually antisocial Gail (representing Abigail in the historical scenes) improves her social status by being cast as one of the Salem teenagers in her high school production of The Crucible.

Soon enough we don’t know what Ms. Ruhl wants to say in a play that careens from subject to subject: misogyny, opioid abuse, poor parenting, sexual manipulation, witchcraft, the correction of historical misinformation, possible causes of the Salem girls’ hysteria (including “rye bread” poisoning), the locations of the sites where the historical events transpired, Becky’s wish that she be recognized as “real,” and wishful platitudes about love: “And may we love each other/in a world where asking to be loved is the spell/and loving in return is beyond enchantment.”

It mixes straightforward contemporary realism with surrealistic dreamscapes and historical pastiche, the language ranging from present-day profanity to seventeenth-century rhetoric drawn from the trial transcript. The modern scenes are spoken in a pronounced New England accent, most egregiously by Ms. Buckley’s Witch, who says “erl” for “oil,” and something like “kierse” for “curse.” I’m also curious as to why, given Ms. Ruhl’s interest in Tituba, whose unknown origins she writes of in her afterword, is played by a white actress, given the general opinion that she was likely not Caucasian.

What comes off as snarky sarcasm on the page, needing a light-handed touch, is played on stage, under director Rebecca Taichman’s guidance, for heavy-handed humor, a major reason so many of the potentially funny lines get little more than a polite snicker, if that.

Deirdre O’Connell’s (Dana H) widely recognized talent as one of New York’s acting treasures allows her to overcome the worst excesses of this approach; much as Becky can be an annoying person with whom to spend two hours, she makes her presence at least bearable and, occasionally, even charming. The always dependable Thomas Jay Ryan is nicely versatile in several supporting roles, while Tina Benko, as always, carries off her duties with quiet flair. Mr. Sanchez’s Stan is appealingly sincere, Mr. White’s Bob serves the purpose, but Ms. Buckley’s Witch and Ms. Crowder’s Gail are unconvincing exaggerations.

Riccardo Hernández provides a suitably indeterminate space: a lovely wooden floor pattern emanating from a central circle, surrounded by a pale, beige cycloramic background, and occupied by spare furnishings as needed. Barbara Samuels does the honors of lighting it well, and Emily Rebholz’s costumes effectively suit their characters.

Sarah Ruhl is one of our most promising young playwrights but, after this one, she’ll have to spend a little time in the stocks contemplating her next project before moving on. One hopes she won’t consult a witch about it, though.