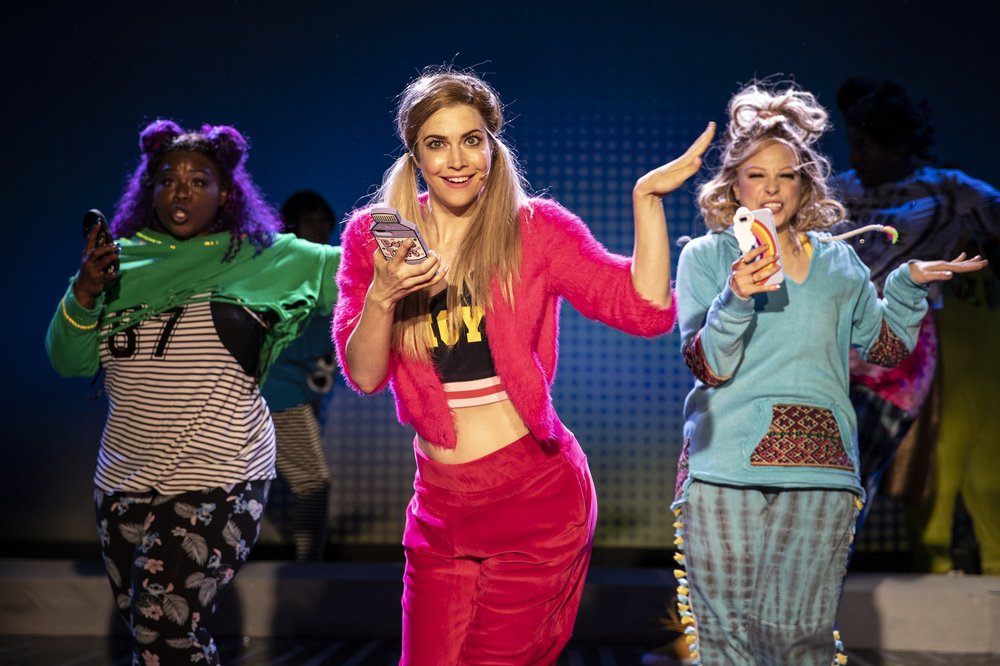 Much the same happens, of course, at Harry Potter and the Cursed Child, but that one’s based on a worldwide phenomenon more or less familiar to everyone on the planet. The somewhat more niche-oriented Be More Chill is also inspired by a popular young adult novel, the late Ned Vizzini’s 2004 book of the same name.

The show’s 2015 premiere at the Two Rivers Theater in Red Bank, New Jersey, had immediate local popularity but excited little outside interest. Then, two years later, to its creators’ surprise, the cast album—book by Joe Tracz, music and lyrics by Joe Iconis—became an Internet sensation, with over 150 million (and counting) streams. Thus its New York premiere and the scads of revved up young fans reveling at its every familiar twist.

In fact, even for those who’ve never read or even heard of Be More Chill the story comes weighted with familiar tropes. It’s yet another tale of a nerdy, geeky, insecure, high school kid, this one called Jeremy Heere (Will Roland), victimized by the popular kids and afraid he’ll live and die a virgin. (The school, by the way, is in New Jersey, one of those places whose mere mention in a New York theatre always gets an easy laugh.)

There’s also the girl Jeremy adores, Christine Canigula (Stephanie Hsu, outstanding), who’s initially more interested in Jake; Jeremy’s best friend, the stoner/gay gamer Michael Mell (George Salazar, appealing); and two older men (both played by the versatile Jason Sweettooth Williams): Jeremy’s dad, too depressed by his marital separation to even put his pants on, and the school’s drama coach, Mr. Reyes, directing a Midsummer Night’s Dream in which the fairies have been replaced by space aliens (from space, as he emphasizes).

We get to the big plot device when, through Rich’s intercession, Jeremy pays $400 (his Bar Mitzvah money) for a Squip (Super Quantum Unit Intel Processor) pill, which is actually a tiny computer programmed to increase his popularity. The Squip appears in the guise of a flamboyantly costumed and bewigged man—Bobby Frederick Tilley II is the designer—played by Jason Tam as a digital mentor guiding Jeremy’s choices. Special effects, robotic movements, and computer-related projections (by Alex Basco Koch) help set the sci-fi tone on Beowulf Boritt’s set of oblong, receding frames, at whose rear sits the six-piece band. Jeremy’s experiences after swallowing the Squip are fun but predictable, as is the moral when our hero realizes that you have to remain true to yourself. And there’s surely an anti-drug message in there as well.

Under Stephen Brackett’s speedy, driven direction, everything we see and hear—the emotions, the singing, the music, the dancing, the lighting (by Tyler Nicoleau), the costumes, the projections, the sound (by Ryan Rumery), and so forth—is exaggerated for maximum visual and aural effect. Choreographer Chase Brock matches the score’s insistently rhythmic rock beat with insistently dynamic dance routines, putting his physically diverse but athletically flexible ensemble through one complex routine after the other. It all comes together with particular appeal when they sing and dance the show-stopping “The Smartphone Hour (Rich Set a Fire),” in which Tiffany Mann displays a shatteringly powerful voice. At the other end of the vocal spectrum is the adenoidal sound of the otherwise appropriately awkward Will Roland.

Each cast member—these are youthful adults, not kids—is terrifically talented, warranting the large number of solos spread out among them. Online fans are said to be craziest about Michael’s “Michael in the Bathroom.” But even Salazar’s fine rendition can’t save it from seeming not only overlong (like the two and a half-hour show) but dramatically extraneous.

Obviously, Be More Chill couldn’t be more chill for its rapidly growing fan base. My granddaughter, a high school English teacher, who wasn’t familiar with the book, had a great time, so my reaction is surely a limited one.

Be More Chill is a highly polished, high decibel, high school based entertainment whose score, while providing a few highlights, lacks sufficient variety to sustain interest. Similarly, its subject matter is neither engrossing nor witty enough to make its sci-fi take on conventional situations overcome its persistently sophomoric attitude. I’m sure, though, that the show’s legions of fans would love to tell me I need to be more chill.