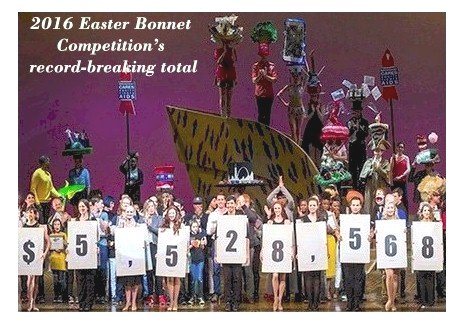 Another benchmark was set: the Spring 2016 tally is the largest from either an Easter Bonnet or Gypsy of the Year fundraiser BC/EFA history.

The show, presented at Nederlander’s Minskoff Theatre, home to Disney’s The Lion King, celebrated six weeks of fundraising by 58 Broadway, Off-Broadway and national tour companies. More than 230 of theater’s best actors, singers and dancers participated – in addition to costume designers, stage managers, music directors, and wardrobe staff. Seventeen extravagant, handmade bonnets were presented by participating shows and organizations such as Broadway Serves, R.Evolución, and Broadway Green Alliance. There was a tribute to the dedicated volunteers of the Bucket Brigade and a performance by Broadway Inspirational Voices.

It opened with a salute to the 25th Anniversary of The Will Rogers Follies [Best Musical]fronted by Tony-nominated Cady Huffman of the original cast and 24 eye-poppingly-costumed singer/dancers, as well as some of Tommy Tune’s Tony-winning choreography.  Directing was T. Oliver Reid, with special material by Jed Resnick and choreography by Rommy Sandhu.

An American in Paris’ Tony-nominated Max von Essen and Brandon  Uranowitz  and company members performed “Turn It Off, Seriously,” a spoof on phone calls, photography, and texting during shows [which should be played before the opening of shows], written by Billy Hipkins and choreographed by Sam Strasfeld and Victor Wisehart. 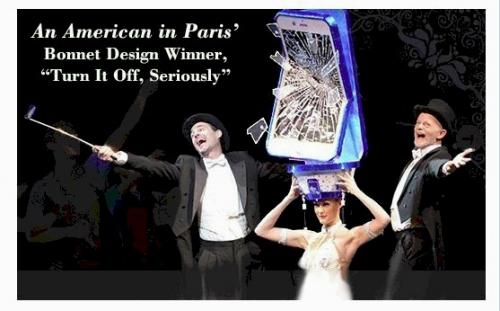 There was a surprise performance by rock legend Stevie Nicks, magnificently accompanied by the brilliant young musicians from School of Rock, which, at Tuesday’s show, brought a rousing standing ovation from the SRO audience.

Kinky Boots’ Ellyn Marie Marsh was interrupted as she began a rendition of “Meadowlark” from The Baker’s Wife and urged to do a Hamilton-inspired rap rendition.

Among special moments was a tribute to accomplishments through BC/EFA and The Lion King grants to Umthwalume Community Services and more than 50 HIV/AIDS organizations in South Africa; and Jake Epstein, Greg Balla, and cast members from Off-Broadway’s Straight as Epstein and Balla faced off in an fierce but invisible ping pong battle complete with human sound effects.

The company of Lin-Manuel Miranda’s Hamilton took Presentation honors for transforming their production number into a homage to Stephen Sondheim’s Sweeney Todd with, maybe in a hint of things to come, Miranda chillingly portraying the demon barber of Fleet Street.

The company of Fun Home was runner-up for turning West Side Story’s “Gee Officer Krumpkee!” into a plea to Miranda to write a show for them. But they ultimately realized that they could control their own destinies by creating roles for themselves, just as he’s done.

The Bonnet Design Award went to the company of An American in Paris for its two-sided bonnet of an exploding and shattered Smartphone, created by Billy Hipkins, Veanne Cox, Christy Morton, Shannon Rugani, Kelly Saxon, Jeffrey C. Sousa, and Tory Trowbridge.

This year’s top Fundraising award went to Hamilton, which raised an astounding$516,029.  Not unexpectedly, it was a Hamilton day with the effusive and gracious Miranda posing for selfies and hugging participating cast members.

Last year’s event brought in a then-record $4,711,386. Since the Easter Bonnet Competition began in 1987, the event has raised more than $68.8 million for Broadway Cares/Equity Fights AIDS.

BC/EFA is one of the nation’s leading industry-based, nonprofit AIDS fundraising and grant‐making orgs. Since 1988 more than $285-million has been raised for essential services for people with AIDS and critical illnesses. There are annual grants to more than 450 AIDS and family service organizations in all 50 states.

Broadway Cares is the major supporter of the social service programs at The Actors Fund, including the HIV/AIDS Initiative, Phyllis Newman Women’s Health Initiative, and Al Hirschfeld Free Health Clinic.