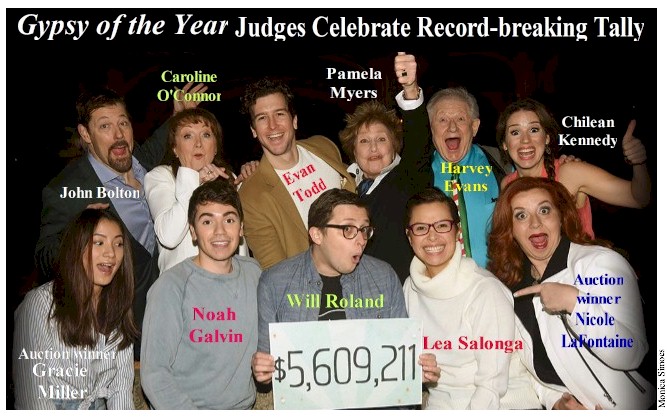 “This event, like our annual Eastern Bonnet and Broadway Bares shows, honors the tireless work of the ensemble singers and dancers in theater, known as ‘gypsies,’” says BC/EFA executive director Tom Viola. “For two performances, more than 200 of Broadway’s and touring shows’ gypsies and special guests perform in celebration of the donations raised. The annual largesse of theatergoers is truly awesome.”

This year’s show was a big as any Broadway must-see with a huge contingent of pit singers, dressers, and costume, hair, make-up teams, and stage managers. The grand total was announced at the end of Tuesday’s matinee performance by Meteor Shower’s Laura Benanti, Keegan-Michael Key, Amy Schumer and Jeremy Shamos, who put on a virtual 20-minute slapstick and comic “bitch fest” routine that could easily lead to the dynamic foursome starring in a TV sit-com. Obviously, from Schumer and Benanti’s backbiting antics and the deadpan cut-ups of Shamos and Key, this is one cast that really gets along. Schumer and Key are making their Broadway debuts.

The quartet also presented the awards to the top fundraisers and for best original performance.

Returning to host for his 10th consecutive year was musical theater rapid-fire speaking Everyman Seth Rudestsky, who again kept the packed house in stitches with his “deconstructions” of big musical numbers and those that sang [or talked] them. Gypsy of the Year got off to a rousing start with School of Rock’s growing-taller-by-the-minute dynamo belter Amadi Chapata, Lea DeLaria, Cady Huffman, Lacretta, and Shakina Nayback headlining an amazingly energetic ensemble of 20 dancers and 12 off-stage vocalists celebrating the centennial of women gaining the right to vote in New York. The number was directed by Tony-winner Huffman and choreographed by Lorna Ventura.

Tony-nominee for Best Musical Come From Away company members took top honors for best onstage presentation with a self-deprecating journey through Tony-nominated choreographer Kelly Devine’s efforts to create choreography for actors who couldn’t dance. The zinger segue had standbys doppleganging for the cast members and doing choreographic acrobatics and high jinks. The sequence was written and directed by cast member Sharon Wheatley, with chorography by Richard J. Hinds.

Start-to-finish, there was spectacular dancing and one dazzling moment after another. Especially memorable were members of the Cats company lived far beyond their nine lives and transitioned into feline zombies. Jessica Hendy wrote and directed, with music and lyrics by Andrew Lloyd Webber, Rod Temperton (Michael Jackson’s “Thriller”), pianist Ming Aldrich-Gan, and Hendy.

Who says you can’t dance and sing live? Certainly not two-time Tony-nominee Charlotte d’Amboise, in the top echelon of our great dancers, brought the house down with her tale of being in Chicago and Sweet Charity at the same time, the latter as stand-by for Christina Applegate, who she was assured would never miss a performance — and then proceeded to break her foot.

A large contingent of actors representing touring shows number knocked the audience out with a standout number, directed and choreographed by Chaz Wolcott, to Sammy Davis Jr.’s rendition of Anthony Newley and Leslie Bricusse’s “Gonna Build a Mountain” from Stop the World – I Want to Get Off.

It wasn’t all razzle-dazzle. Attaway and Come from Away’s Chad Kimball, Caesar Samayoa, and Sharon Wheatley spoke on BC/EFA’s nearly three decades of harnessing the theatrical community’s innate ability to overcome obstacles to help  all races, all faiths; and finding the strength in united opposition to bigotry, intolerance, and governmental indifference across the country.

They noted how the Broadway Cares and the Actors Fund collaboration provides a safety net of social services across the country for those in the entertainment industry.

BC/EFA has provided more than $90- million in support to the Actors Fund’s HIV/AIDS Initiative, the Phyllis Newman Women’s Health Initiative, the Dancers’ Resource, addiction and recovery services, Artists Health Insurance Resource Center, and the Friedman Health Center for the Performing Arts, the only health center in NYC designed to address the primary and specialty needs of those in the entertainment industry and performing arts. Hamilton’s Javier Muñoz recalled how the theater community came together for the first Gypsy competition in 1989, “The AIDS epidemic had taken a staggering number of people in our community alone. People infected and affected by the virus lived in fear and desperate sadness, too often isolated and alone. No one had not been deeply affected in some way. For those too young to know anything of the disease other than today’s medications and services, count yourselves lucky. It was, indeed, worse than anything you can imagine.”

He noted the frustration and anger about the epidemic was so widespread that something was needed to “remember what brought us all together. So we observed a moment of silence.” For 29 years, that moment has been to reflect, said Muñoz  “on those we love who cannot be here and those whose voices still cannot be heard – not just because of AIDS but for a multitude of challenges.” He stated that many would not be here today without the lifesaving, life-altering support of Broadway Cares; and that many of the most vulnerable are worried about their rights, access to social services, and family and community’s safety.

The moment of silence is in contemplation of lives lost to and affected by HIV/AIDS, is included in every BC/EFA event.

Muñoz closed, stating, “Let us now, together, take a moment to recommit to reaching beyond ourselves. To stand with those who need us most – and with each other – able, willing, and as ever, be compelled to do our part, however small, to ensure that all are embraced in times of crisis, isolation and injustice. No one is alone.”