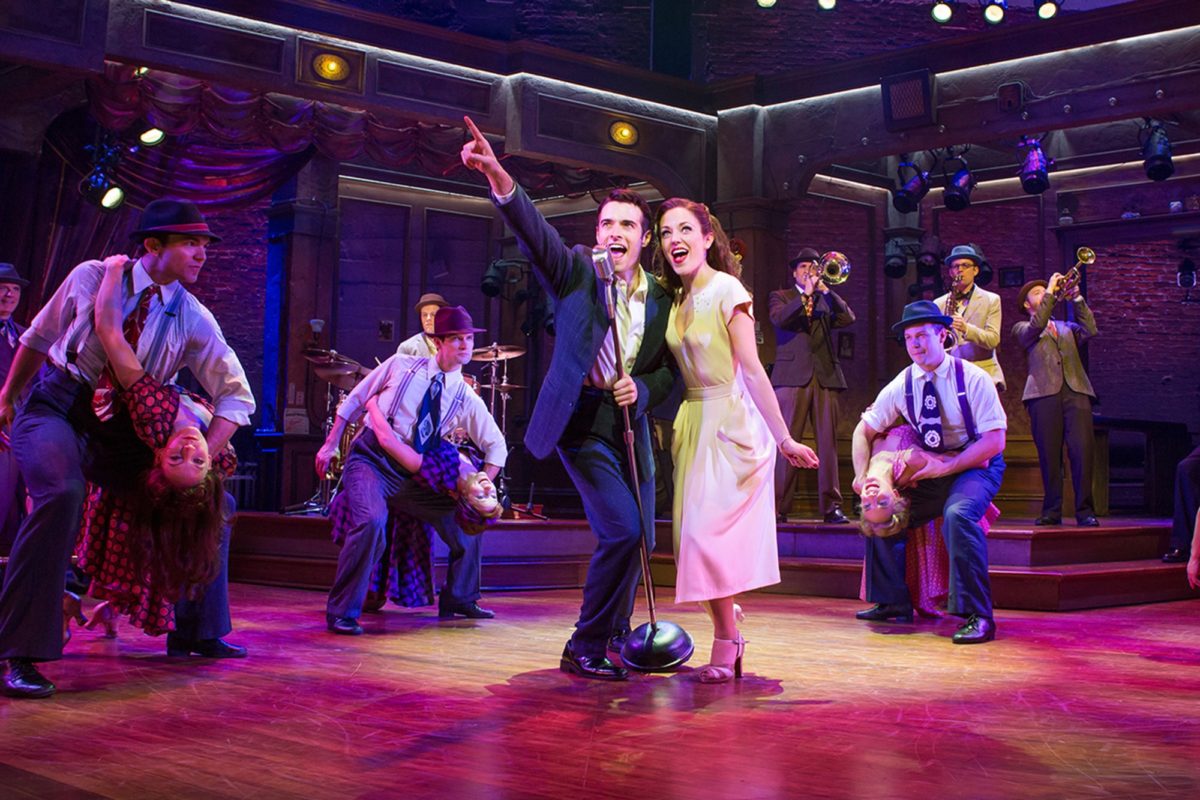 Though Bandstand’s book by Rob Taylor and Richard Oberacker is a fairly standard-issue affair of World War II vets seeking redemption and stardom by forming a swing band, director-choreographer Andy Blankenbuehler has a startlingly different take on the material. As the show starts, David Korins’ homey small-town juke joint set is transformed by Jeff Croiter’s spectral lighting and Nevin Steinberg’s frightening soundscape into a deafening nightmare of a battlefield. Employing identically-dressed chorus members, Blankenbuehler creates a shattered hall-of-mirrors vision of protagonist Donny’s wartime memories. In another staging coup, Blankenbuehler has several scenes with the vets accompanied by those chorus members as their dead buddies, showing that these dark reminders are always with them.

The plot follows a cliched track as piano player-songwriter Donny assembles a crew of colorful misfits; falls in love with widow Julia who just happens to have a great voice and a knack for writing lyrics; and together with the boys in their band, they bet everything on a radio contest. Fortunately, Taylor and Oberacker delve deep into the traumas suffered by Donny and his crew and the score (Oberacker composed the music and collaborated on the lyrics with Taylor) cleverly uses period music to create mood and explore the theme of the vets’ alienation. Blankenbuehler’s integrated direction and choreography brilliantly enforce these elements.

Corey Cott has charm and chops (both dramatic and vocal) as Donny as does Laura Osnes, fast becoming one of Broadway’s most reliable leading ladies, as Julia. For an added bonus, the quirky band (Alex Bender, Joe Carroll, Brandon J. Ellis, James Nathan Hopkins, Geoff Packard) all expertly play their own instruments and create distinct characterizations. Bandstand does sing a familiar tune, but it has drawn up some new and arresting arrangements.

While Bandstand is that Broadway musical rarity, a totally original piece not based on a book, play, or movie, Anastasia has been through the recycling mill several times. First the legend of an amnesiac girl claiming to be the sole survivor of the Russian imperial family was made into a 1955 Broadway play by Maurice Maurette, then a 1956 Oscar-winning film starring Ingrid Bergman and Yul Brynner, followed by a 1997 animated film which “inspired” the current stage version. It may go over with the Wicked-Annie-Matilda tween girl crowd, but this live cartoon is not for adults.

Full of flashy video projections by Aaron Rhyne, Darko Tresnjak’s broadly-played production is like one of those combination rides and shows at Disney World or Universal Studios. In Terrence McNally’s primary-colored book, Anastasia is portrayed as a feisty heroine, full of spunk and grit as she escapes Communist Russia and slogs her way to Paris to claim her identity before the Dowager Empress. Composer Stephen Flaherty and lyricist Lynn Ahrens have augmented their score for the ’97 movie with new songs, all of which employ simplistic tunes and words.

Echoes are greater musicals abound. “Learn to Do It” where the title character is drilled in Tsarist history and court etiquette by two male tutors and then the trio celebrates in dance, is too close to similar sequences in My Fair Lady. There’s even a scene where the girl enters in a stunning evening gown for her transformation (Linda Cho created the sumptuous costumes) just like Eliza Doolittle and Gigi. A new character, a strident Bolshevik officer, pursues Anastasia to France obsessed with bringing her to justice, just as Inspector Javert is hell-bent on apprehending Jean Valjean in Les Miserables. Both treks are accompanied by an introspective solo. Clownish second leads provide comedy relief and the heroine runs after her man after discovering he nobly sacrificed a fortune for love.

The competent cast led by Christy Altomare and Derek Klena earns their paychecks but rarely raises above the stale script. Only Caroline O’Connor as a buffoonish countess and Mary Beth Peil as the stern Empress create an original impression.