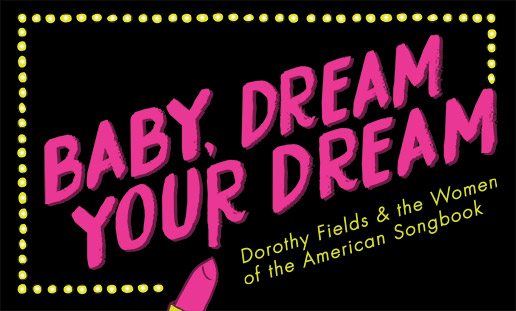 The Third Concert of Lyrics & Lyricists at the 92nd Street Y was held on March 18-20 to honor women songwriters in “Baby, Dream Your Dream: Dorothy Fields and the Women of the American Songbook.”  Deborah Grace Winer, the series artistic director served as writer and charming host. The terrific all female cast starred Kenita Miller, Nancy Opel, Margo Seibert, Emily Skinner and special guest artist, the remarkable Marilyn Maye.  The renowned music director John Oddo was the arranger/orchestrator on piano and led the ironically all male

Band consisting of Aaron Heick on reeds, Scott Harrell on trumpet, Jay Leonhart on bass and James Saporito on drums.  The program was smoothly director by Mark Waldrop.

According to Program notes by Winer,  “Tin Pan Alley was always a ‘boys’ club’ but a few brilliant persistent women elbowed their way in creating some of the most iconic songs and musical in the American pantheon.  Dorothy Fields led the way (collaborating with Jerome Kern and others) and winning an Oscar for her lyrics to  “The Way You Look tonight by the age of 30, and becoming the only woman whose name sits alongside the Gershwins, Kern, Berlin, Porter, Rodgers, Hart, Hammerstein and other A-listers of the American Songbook.”

The show opened with the cast performing “Baby, Dream Your Dream” followed by “There’s Gotta Be Something Better Than This” from Sweet Charity written by Dorothy Fields and Cy Coleman (1966).  Two of Fields most famous songs were written with Jimmy McHugh “On The Sunny Side of the Street” sung beautifully by Emily, and Margo sang a sweet rendition of  “I Can’t Give You Anything But Love.”

There were only a handful of female songwriters but Fields was not alone in her time. The standouts were Kay Swift (music) who wrote “Can’t We Be Friends” with Paul James in 1929 sung by Kenita.  Nancy performed “You Oughta Be in Pictures” that Dana Suesse wrote the music for with Edward Heyman.  The cast sang Ann Ronell’s (written with Frank Churchill) “Who’s Afraid of the Big Bad Wolf” from the 1933 film Three Little Pigs, which was a political statement at the time.  Other female songwriters came later and stood on the shoulders of these pioneers.

Many people didn’t realize that Billie Holiday wrote her iconic song “God Bless The Child” with Arthur Herzog, Jr. and Kenita scored with.  The brilliant Betty Comden (with Adolph Green) was represented with Nancy’s dynamite rendition of “If You Hadn’t- But You Did” from Two On The Aisle and “The Party’s Over” from Bells Are Ringing both with music by Jule Styne.  Another fabulous female composer was Carolyn Leigh who wrote Little Me with Cy Coleman and Kenita sang “I’ve Got Your Number” and Nancy scored with “When In Rome” and Emily’s love voice was perfect for “It Amazes Me.”  Mary Rodgers, daughter of Richard, wrote Once Upon A Mattress with Marshall Barer and the show made Carol Burnett a star in 1959.  Kenita did a great job on one of the hits from that show, “Shy.”

The extraordinary Marilyn Maye rocked the room with “You’re Gonna Hear From Me” written by Dory Previn with her then husband Andre Previn from the film Inside Daisy Clover (1965).

She also sang a wonderful rendition of  “Fever” that Peggy Lee wrote additional lyrics to.  A highlight of the show was her thrilling “Fifty Percent” from Ballroom written by Marilyn Bergman (with her husband Alan and music by Billy Goldenberg).

Another great moment was the emotional “Back To Before” sung in parts by the cast, from Ragtime with lyrics by Lynn Ahrens (and music by Stephen Flaherty).  The show closed with the optimistic “The Best Is Yet To Come” by Carolyn Leigh with Cy Coleman and as the lyrics appeared on the screen, the audience happily joined in.

There are two more concerts “yet to come” in this series.

May 6-8 Songbook Classics by Unsung Lyricists

June 3-5 From Camelot to California – the Worlds of Lerner & Lowe with Rob Berman, Artistic Director