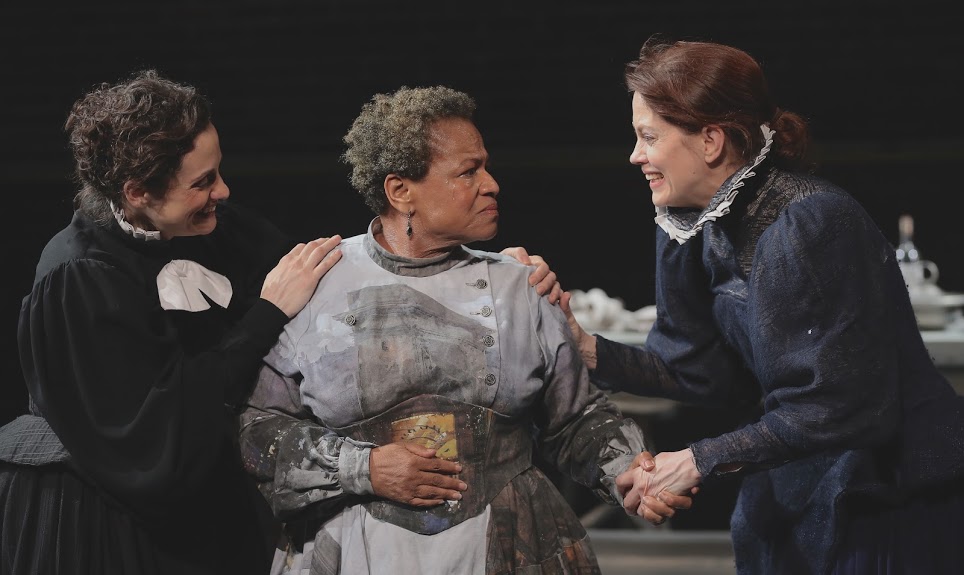 The production at St. Clements stars Michelle Hurst (“Orange is the New Black”) as Babette, a French refugee who finds asylum in a pious Protestant community in 19th-Century Norway. Life in the community is fairly sequestered, especially for the daughters of its religious leader. Sisters Philippa and Martine (Juliana Francis Kelly and Abigail Kileen, who conceived and developed the play) each have a chance at love — Philippa with a famous French opera star and Martine with a Swedish officer. Their father disapproves, however, and when the men leave,  the women continue with their uneventful lives

Until Babette arrives, that is. The woman, about whom rumors fly, arrives with a letter of introduction from Philippa’s former suitor, asking her family to provide some of the same hospitality and kindness they bestowed on him during his stay.  The women offer Babette a position in their home as a cook and she stays for the next 14 years.

Babette is accepted into the community, but doesn’t reveal much about her former, tragic life. Her only connection to her past is a nephew and a national lottery ticket which he faithfully purchases for her. When it hits, Babette prepares a feast, the likes of which the community has never seen. It brings back memories for Martine’s former beau who stops by for a visit. Could he have sat at Babette’s table once before?

Her gift to the town is one of the most selfless acts of gratitude you might ever witness. It transforms the villagers and gives them moments of joy where they experience God’s grace and forgiveness. The message, based on a short story by Isak Dinesen, is moving and poignant without getting preachy. It’s one of the best sermons you can experience for Easter this week. And this story, originally published in 1950, seems relevant in the midst of current cultural wars about immigration.

The tale, written for the stage by Rose Courtney, unfolds on a stage minimally dressed by Christopher Akerlind, who also designs the lighting which, along with black and white Puritan costuming (designed by Oana Botez),  keeps the visual dark and dim, like the lives of the villagers. When Babette’s feast touches the diners, lights brighten and we get a sense of joy.

Coonrod also employs a minimalist technique, having the actors pantomime most of the props depicted, and resorts to the real things only for the feast, where candles and crystal beautify the table. I do have to admit, I was hoping for a David Cromer moment like the one from Our Town where the scene comes to life in visual and sensory ways. The feast is a bit disappointing and doesn’t seem all that different from the bland and subdued life that proceeded it.

This 90-minute production premiered in January at Portland Stage Company in Portland, ME. In a related note, Stéphane Audran, who starred as Babette in the 1987 Oscar winning movie, died yesterday.