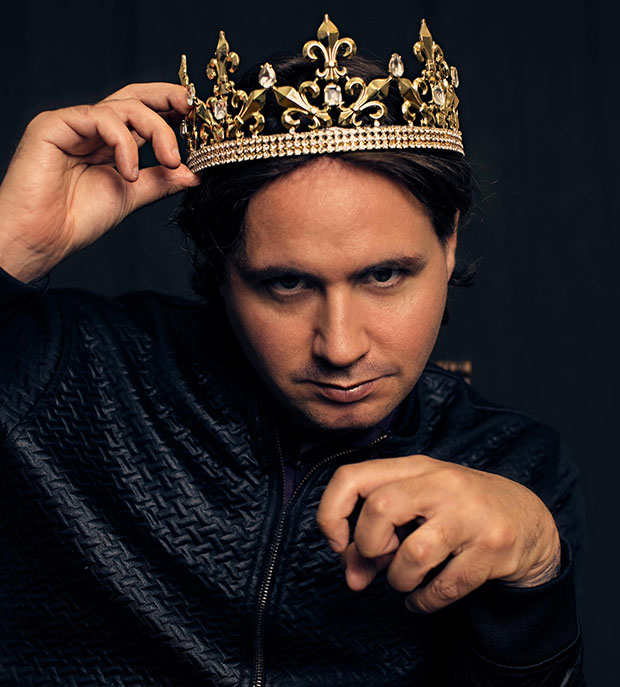 June 21, 2018:  Tony nominated theatre luminary Austin Pendleton directs and adapts a new stage version of Richard III, Shakespeare’s greatest villain, in WARS OF THE ROSES: HENRY VI & RICHARD III, which begins performances August 1st at the 124 Bank Street Theatre.  The play combines texts from William Shakespeare’s Henry VI Part 3 and Richard III, to create a version, which has never been seen before. Produced by Ruth Stage, the production stars Pendleton as Henry VI and Matt de Rogatis as Richard III, while giving a fascinating take on one of history’s most notorious villains. The opening is set for Saturday, August 4th at 7PM.  WARS OF THE ROSES: HENRY VI & RICHARD III will play a limited engagement through August 19th.  Tickets are $25, for tickets and further information visit www.proveavillain.com.

With the two texts combined, director Austin Pendleton’s WARS OF THE ROSES: HENRY VI & RICHARD III explains how Richard III evolved into the events that shaped his tyranny. In the text of Henry VI, Part 3, Richard performs the role of a subjugated good brother while secretly behaving with bloodthirsty abandon.  Killing Henry, Richard then declares himself severed from his family and brotherhood and stands alone in his quest for the crown.  In the text of Richard III he is now the central character of the play stopping at nothing to become king, while keeping his subjects and rivals under his thumb.

“What’s always fascinated me about Richard III is how he became to be the way that Shakespeare so brilliantly portrays him in the play named after him” says Mr. Pendleton.  “I believe the answer to all of this is clearly dramatized by Shakespeare in Henry VI, Part 3, the play that leads up to Richard III.   So when Matt de Rogatis, whose exciting Hamlet I’d seen a couple years ago, came to me with the idea of Richard III, my first thought was to align the two plays.  I am very excited about WARS OF THE ROSES: HENRY VI & RICHARD III.  With a great deal of judicious cutting we to managed to get a swift and compact script and thus we can track the development of this troubled and terrifying Richard from a young man searching for love and acknowledgement to the monster that became King Richard III,” he continued.

Austin Pendleton’s Broadway directing credits include Spoils of War, The Little Foxes  (Tony Nomination), John Gabriel Borkman, The Runner Stumbles and Shelter. Off-Broadway, he has directed Hamlet, Ivanov, Three Sisters (Obie Award) and Uncle Vanya (CSC), Vieux Carre, and Toys In The Attic (Pearl) Fifty Words (MCC) and Between Riverside and Crazy.  He directed the London production of Detroit at the National Theatre and has directed many productions regionally including Say Goodnight Gracie at Steppenwolf, and Fathers and Sons, Beach House, The Master Builder, Miss Julie and The Dance of Death at Long Wharf. As a playwright, he has written Orson’s Shadow, Uncle Bob and Booth. He has most recently appeared in New York in Dress of Fire, City Girls and Desperados, Delta in the Sky With Diamonds, The Workshop, Consider the Lilies, The Sea Gull and King Lear.  He made his NY debut in 1962 in Oh Dad, Poor Dad …, directed by Jerome Robbins, In 1964 he made his Broadway debut, again directed by Mr. Robbins, as Motel the Tailor in the original cast of Fiddler on the Roof.  Since then he has appeared on Broadway under the direction of Alan Arkin in Hail Scrawdyke (Clarence Derwent Award); Mike Nichols in The Little Foxes in a cast which included Anne Bancroft, George C. Scott, Margaret Leighton, Beah Richards, E.G. Marshall, Maria Tucci and Richard Dysart; Morton da Costa in Doubles; James Lapine in The Diary of Anne Frank with Natalie Portman and Linda Lavin.  Next season he will appear in Choir Boy at MTC on Broadway.  Off-Broadway he appeared in the title role in The Last Sweet Days of Isaac and won an Obie Award.  He has appeared in about 250 movies, including “My Cousin Vinny,” “What’s Up Doc,” “Wall Street 2: Money Never Sleeps,” “The Front Page,” “Catch -22,” “The Muppet Movie,” “Mr. and Mrs. Bridge” and “Short Circuit.”  He wrote the libretto for A Minister’s Wife.  Mr. Pendleton is the recipient of the 2007 Drama Desk Special Award as “Renaissance Man of the American Theatre”

The playing schedule for THE WARS OF THE ROSES: HENRY VI & RICHARD III is as follows: Wednesdays through Saturdays at 7PM, with Sunday matinees at 3PM through August 19th.  There is one Saturday matinee on August 4th at 2PM.   Tickets are $25 and can be purchased by visiting  www.proveavillain.com
Photo: Chris Loupos