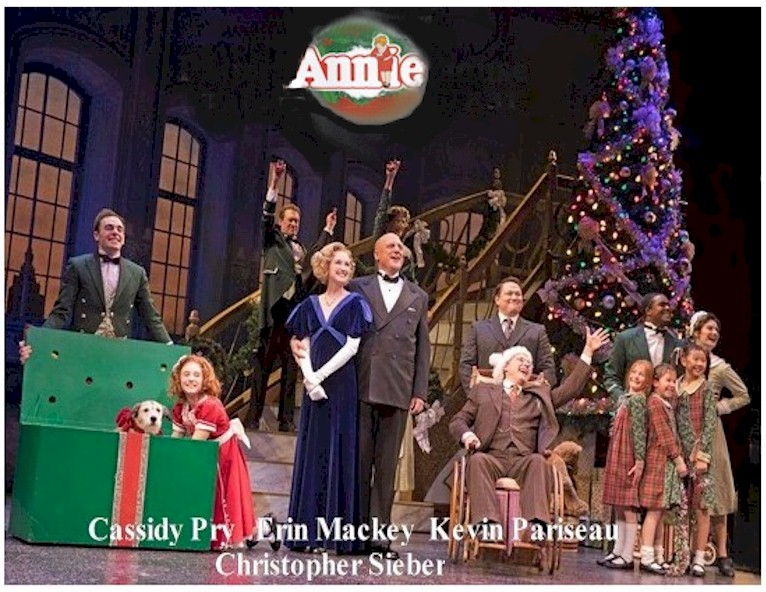 The vastness of Paper Mill’s stage, which comes extremely close to rivaling Radio City Music Hall’s, and set designers desire to fill it all the way Left and Right, has worked against many a show. But this isn’t one of those occasions.

Adapted from Harold Gray’s classic comic strip, Little Orphan Annie by the late three-time Tony-winner Thomas Meehan (The Producers, Hairspray — and Young Frankenstein, enjoying quite a successful London revival), it’s Great Depression and we find red-headed moppet Annie, the eldest child at the New York Municipal Orphanage, has never given up hope her parents, who dropped her off 11 years earlier, are coming for her. To search the streets and “Hoovervilles” (camps of the downtrodden) of NYC in the hope of finding them she becomes quite adept at escaping the drudgery of the hard-knock-life  – only to be caught and returned to the clutches of cruel, heavy-drinking, slovenly Miss Hannigan. In a twist of fate, billionaire industrialist, world traveler, art collector, and name-dropper of just about everyone famous in the 30s, Oliver “Daddy” Warbucks, in a benevolent gesture, decides to pick an orphan to spend a Christmas like no other.

At his Fifth Avenue mansion, Annie warms not only his heart, but the hearts of his secretary Grace Farrell, butlers, maids, even FDR, who’s finding ways to put Americans back to work. Warbucks engages Eliot Ness and the FBI in a search for Annie’s parents and offers $50,000 so they can start a new life. Hannigan’s brother, Rooster, straight out of the slammer, abetted by his moll Lily concocts a plan to capture the biggest prize of their tawdry lives. But …

Hoebee, a seasoned director (credits at Paper Mill alone include: Dreamgirls, Hello, Dolly!, High School Musical, Mary Poppins, Miss Saigon, and among numerous others, The King and I and West Side Story), also helms this production. He’s assembled a huge cast of 30 plus, headlined by two Paper Mill favorites: indefatigable Tony-winner Beth Leavel (The Drowsy Chaperone; at Paper Mill and on Broadway in Bandstand and, in a long and storied career, as record executive Florence Greenberg in Baby It’s You (Tony nomination) as that stinker Miss Hannigan and Tony-nominee Christopher Sieber (Tony nominations, Spamalot and Shrek, later in Matilda as harsh, bombastic educator Miss Trunchbull) as Warbucks.

The answer is simple: Leavel’s Miss Hannigan, a role she was born to play and one  she inhibits with pratfalls, slapstick, and face-twisting antics; Sieber, whose amply-endowed outsized voice and steady hand offer just the reassurance needed in hard times; and it’s the perfect time of year to be lifted out of the doldrums with Strouse and Charnin’s score. Who doesn’t need to be assured that the sun’ll come out tomorrow? There are nice moments for featured cast members, such as Allen Kendall, in one of his four roles, radio personality Bert Healy, and his rendition of “You’re Never Fully Dressed Without a Smile,” along with the program’s Boylan Sisters (Bronwyn Tarboton, Kate Marilley, and belter-who-needs-no-amplication Anneliza Canning-Skinner). Wait: there’s one more: Macy, the rescue dog as Sandy (a role she’s played many times).

The superb design of reversible sets and stunning painted scrims of New York City by Tony-winning and Obie-honored craftsman Beowulf Boritt (Paper Mill: The Honeymooners, A Bronx Tale. Broadway: Prince of Broadway, Come from Away, Act One (Tony), and, among many others, the just-opened Meteor Shower) have been smartly resurrected from Paper Mill’s 2002 production; along with the costumes by Suzy Benzinger. The knee-jerk, acrobatic choreography by JoAnn M. Hunter (School of Rock; regional, The Nutty Professor), is far from a highlight – rarely rising to the occasion except for the orphan’s show-stopper “It’s the Hard-Knock Life” and some stylish movement when Mackey and Warbuck’s staff pay tribute to their favorite orphan in the show’s title song.

In the program notes, director Hobbee writes: “It’s significant that the show, like its lead character, has at its core an indefatigable spirit so full of hope. The anthemic tune Annie sings near the beginning of the story declares that even through the dark times of the Great Depression, when half the country was broke, or out of work, and it seemed as though politicians were unconcerned with the plight of the common man, there was still hope … [the late] Thomas Meehan threaded through this musical the powerful message that family can be found in the most unlikely of places … We can’t think of a better way to celebrate that love of family, the promise that hope brings, and the joy of the season than by sharing this wonderful musical.”

Photographs by Evan Zimmerman for Murphy Made