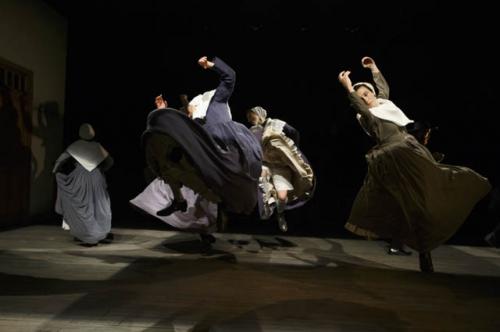 In such pieces as Vienna: Lusthaus and Belle Epoque, director-choreographer Martha Clarke is not concerned with telling a story, but with evoking a specific time and place. Fusing dance and theater, Clarke creates a third, hybrid form. Movement and dialogue convey the interactions and life-blood of communities. Her Angel Reapers, featuring text by Pulitzer Prize winning playwright Alfred Uhry and traditional hymns and works songs as the score, portrays the Shakers, the religious sect so called because of their erratic, uncontrolled physical vibrations during worship services. (The work is now at Signature Theatre but was previously presented in 2011 at the Joyce Theater.) The group’s ecstatic gyrations were probably manifestations of their repressed sexual urges. One of the tenets of this off-shoot from the Quakers was celibacy. They believed married couples should live chastely as brother and sister to avoid the original sin of Adam and Eve. That explains why their numbers gradually dwindled from 6,000 Shaker villages in the mid-19th century to only one in 2016.

Such suppressed carnality is a perfect vehicle for a dance piece and Clarke devises fascinating moves of longing for her company of 11 actor-dancers. Bodies twist around each other and explode in rhythmic outbursts. There is a thin sliver of narrative with bits of storyline for each of the villagers. There’s the historically accurate Mother Ann Lee, the sect’s leader, who along with her brother William, sternly preaches abstinence. Brother Jabez burns for the caress of a male farmer while the orphan Brother Valentine chafes under the enclave’s harsh restrictions. When he runs away with an equally rebellious young woman and she returns in a worldly colorful dress, the contrast to the community’s severe garb is startling. Donna Zakowska’s costumes are particularly effective here.

Equally apt are Marsha Ginsberg’s stark meeting-house setting and Christopher Akerlind’s sun-drenched lighting. The company is intensely fluid and expressive, employing scant back history to convey three-dimensional people, especially Sally Murphy as the puritanical Mother Ann. Running at little more than an hour, Angel Reapers is a mood piece more suited for dance fans than theater aficionados who expect a more robust story with their choreography.