It was a bittersweet evening at Broadway’s mainstay Tony’s Di Napoli on August 17th, as Andy Karl and the cast of Groundhog Day gathered for the restaurant’s celebration of a portrait unveiling. 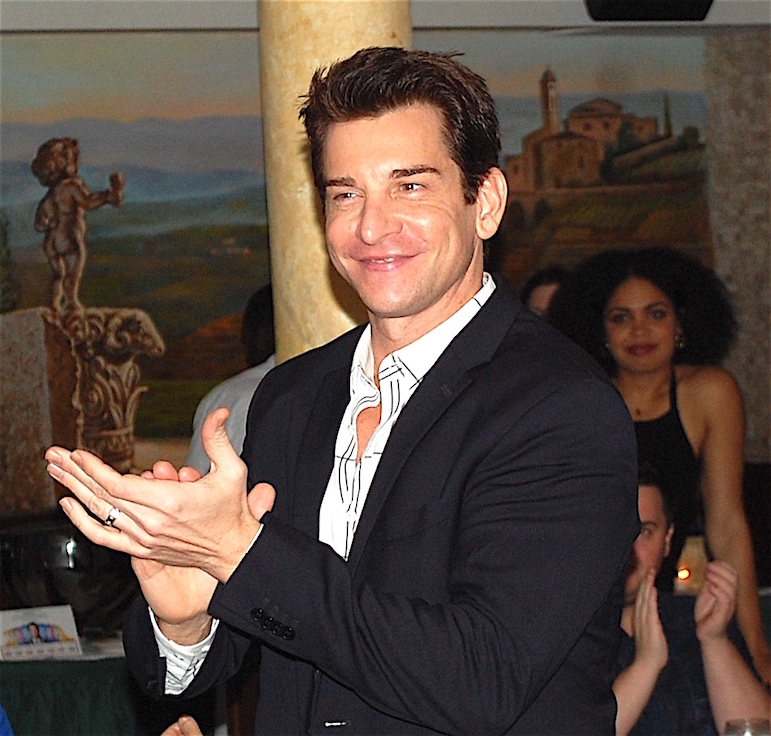 It was a bittersweet evening at Broadway’s mainstay Tony’s Di Napoli on August 17th, as Andy Karl and the cast of Groundhog Day gathered for the restaurant’s celebration of a portrait unveiling. For the first time in the tradition of welcoming a piece to the esteemed Wall of Fame, the Tony-nominated star was being honored as his lauded show is headed towards its closing on September 17th. Hosted by Bruce Dimpflmaier and emceed by Wall of Fame producer Valerie Smaldone, Karl, his castmates, and wife Orfeh looked on as Smaldone spoke of her affection for Groundhog Day, and the joy it was to have Karl’s visage added to the Wall next to Orfeh’s own portrait (received in 2007 for her role in Legally Blonde). The event reunited Smaldone with Orfeh and Karl after she officiated over the 2012 canine wedding of their dog Boo to friend Piper (the benefits of which contributed to North Shore Animal League America and Waggytail Rescue). Artist Dan May created the portrait, of which posters were on hand to be signed for a future auction to benefit Broadway Cares/Equity Fights AIDS.  The festivities also included a celebration of Karl’s August 28th birthday.

In Groundhog Day, Karl stars in the role of Phil Connors, which won him the 2017 Olivier, Drama Desk and Outer Critics Circle Award for Best Actor. With a book by Danny Rubin, direction by Matthew Warchus and songs by Tim Minchin, the story is based on the iconic 1993 film starring Bill Murray. When a big-city weatherman gets stuck in small-town America, laughter ensues. With his unique look on life, Phil is always ready with a one-liner or clever quip about the sappy-cheery people of Punxsutawney, Pennsylvania. However, one extraordinary day is about to show Phil that maybe the joke is really on him.

Karl and Orfeh had one more milestone to celebrate; August 18th marks the release of Legally Bound—Live at Feinstein’s/54 Below digitally and on CD on the Broadway Records label. The live album captures their December 2016 performance, and can be ordered now at BroadwayRecords.com. The title refers to the musical Legally Blonde, in which they both appeared, and which earned Orfeh a Tony Award nomination.