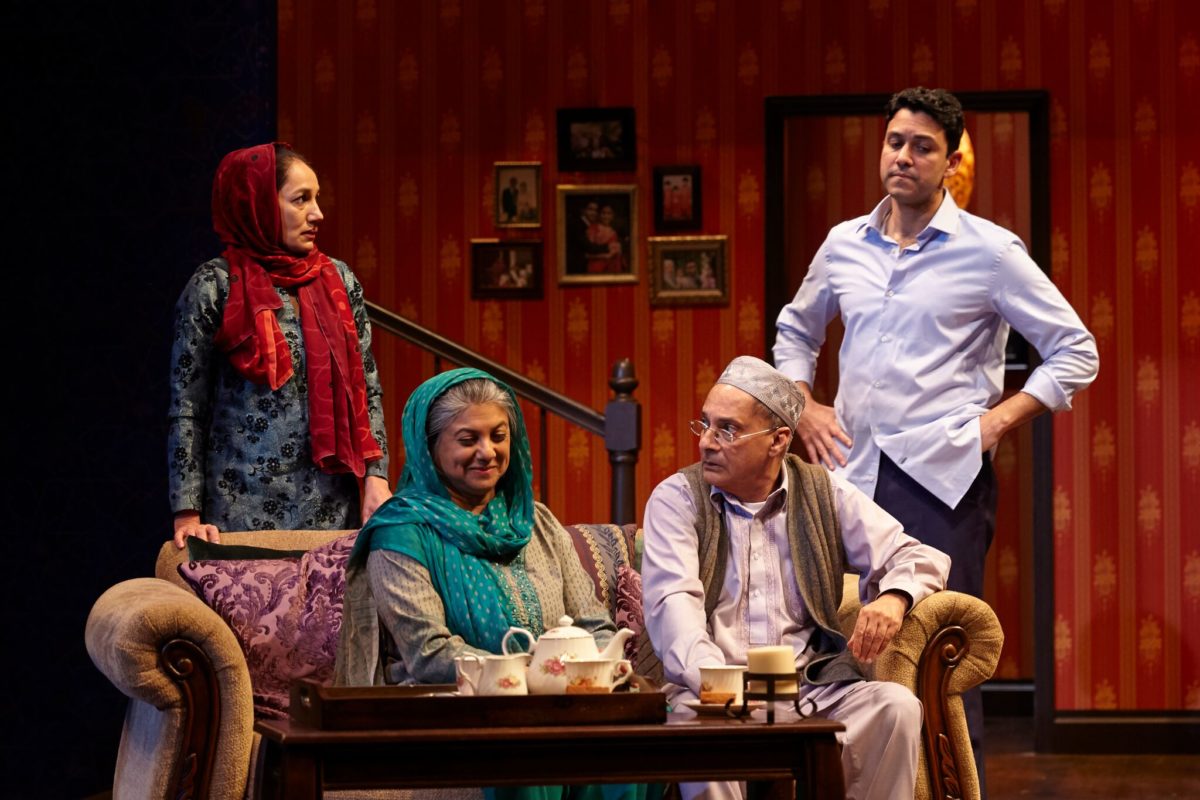 In Hammaad Chaudry’s beautifully crafted drama, we meet the Bhatti family – young professionals, striving to succeed, while maintaining their traditional beliefs about family, and home life. At the same time, Akeem, his wife Saima, and his sister, Javeria, try to support their aging parents. They live with one foot stuck in the India of their youth – before the British Partition of Pakistan and India – and the other curiously surfing social media.

While these contrasts are humorous to us, they highlight the cultural disparity that are at the heart of this story.  And at the same time, they reveal the effects of British imperialism – the loss of nation state, and home. Expelled from India, where they had been wealthy landowners, driven from Pakistan by poverty, and oppressed in the motherland, England, they are society’s underdogs.

Faced with racism in the workplace, both Akeem and his wife become too disillusioned to continue. Their frustrations, like their parents’, pour out in their home lives. Spousal abuse, infidelities, and divorce become a pattern – juxtaposed to the traditional believes of their Muslim faith.

In this way, they become their own victims, and appear to us as the jaded cultural stereotypes, society depicts. As if the bigotry they face were not sufficient, the grandmother, Malika, speaks to her daughter with hostility, yet she is adoring of her son. Similarly, she ignores her loving granddaughter, giving gifts only to her grandson.

While Jo Bonney’s direction is fueled by proselytizing, it also draws out the humanity in these characters, showing us their conflicts, and their self-loathing.

At the center of it, Sanjit De Silva’s Akeem is articulate and passionate – not just a mouthpiece for the issues. Bluntly, he sums it up in a heated conversation with a colleague, “After all that, you still keep killing us, bombing Muslims any chance you get…So David, is it any wonder that people such as those British Muslims, with their British passports, have finally woken up and decided to start killing you back?”

Indeed, it’s a well-wed ensemble, with Ranjit Chowdhry as a shrinking, self-serving patriarch, now in his disillusioned dotage. As his wife, Malika, Rita Wolf is two-faced, and edgy. And Akeem’s wife, portrayed by Purva Bedi, is a study in love and betrayal. The cycle of prejudice goes round and round.

Discovering the inexplicable language of music is the divine pleasure of playwright James Inverne’s new play, A Walk with Mr. Heifetz, at the Cherry Lane Theater. Its parallels to harmony and dissonance in the creation of the state of Israel, carries this drama.

In Act I (1926), we meet the titular hero, Jascha Heifetz (Adam Green), on the occasion of his first concert in Israel. There he’s encountered by Yehuda Sharett (Yuval Boim), a musician, and kibbutz leader, who is on a mission to create the music of Israel.

But, his need to discover the bridge between the composer’s craft, and the socialist’s dream are far from the virtuoso’s reality. “For a mission? I think most musicians would say they’ve found one,” Heifetz imparts, as he impatiently, albeit sensitively tries to entertain Yehuda’s ambition.

Throughout their conversation, we’re serenaded by the Violinist, Mariella Haubs, whose strings bow to Yehuda’s inner thoughts, alternately reflecting the strain of the men’s conversation, and their camaraderie.

Later, in Act II, set in 1945, Yehuda, and his brother Moshe Sharett (Erik Lochtefeld) discuss Heifetz’s third, and last Israeli tour, when regardless of popular sentiment, he performed the music of the Nazi sympathizer, Richard Strauss. As Yehuda laments, “one of us, one of our dear brethren, attacked him outside the King David hotel with a stick. Now he comes no more.”

Indeed, these narrative elements are historically accurate. And Moshe, is of particular interest here, as he served as Israel’s Prime Minister, during the turbulent years, 1954 to 1955.

As brothers, they share the loss of a sister, along with the more recent passing of Yehuda’s wife, Rachel, who perished in an accident. In Act I, she is the girlfriend, and the muse, he talks about to Heifetz.

Arriving to lift his brother’s spirits, Moshe brings music – a recording based on a melody the inmates of Theresienstadt sang. It’s called “Rachel’s Song,” by Yehuda Sharett. It’s based on a poem his deceased wife had discovered, and which he recites to Heifetz, in the first act.

As Moshe Sharett, Erik Lochtefeld is especially convincing. He even looks a lot like the historical Sharett. Adam Green’s Heifetz looks the part of the playboy – the Russian Jew who captured the American dream. And Yuval Boim’s Yehuda earnestly paves the way to enlightenment.

In director, Andrew Leynse’s hands, the production flows easily, focusing on the music we hear, and hear about. Art as inspiration is beautifully evoked, and the need for hope is wondrously rekindled.