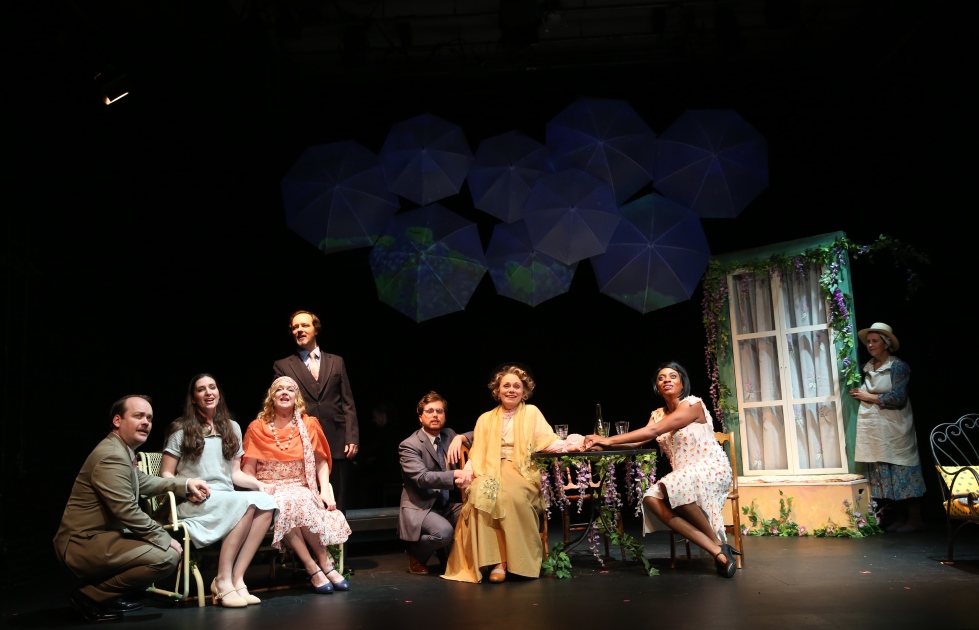 The novel has been adapted for the stage several times, including Broadway productions in 1925 and 2003. It was turned into a film in 1935 and again in 1992. And in 2010, Charles Leipart and Richard Bunger Evans based a musical stage adaptation on the novel.

One might think there’s not much more to be done with this venerable work. But wait! This season Utah Lyric Opera, in association with Thunder Media Group, is presenting the New York premiere of a new musical based on that very same 1923 novel. It has a book and lyrics by Elizabeth Hansen, and music and lyrics by C. Michael Perry.

An Enchanted April is directed by Alice Jankell and features an engaging cast. Leah Hocking is Lotty Wilkins, the young wife who reads the newspaper advertisement and decides the castle would provide a perfect getaway. Christian Cole is Rose Arbuthnot, who agrees to accompany Lotty so she can escape from her neglectful husband, a writer of naughty novels. Alma Cuervo is Mrs. Fisher, the society lady who longs for the past and disapproves of the present. Gena Sims is Lady Caroline Duster, a beautiful socialite who is not as carefree as one might imagine.

Peter Reid Lambert as Thomas Briggs, the charming castle owner who falls in love with Rose; Aaron Phillips as Frederick Arbuthnot, who can’t quite connect with his wife; and Jim Stanek as Mellersh Wilkins, Lottie’s not particularly loving husband, round out the cast. And Melody Meeks Putnam, who plays the cook/maid Francesca, speaks seldom, and then in Italian, but sure can bang that gong.

The score is luscious and lyrical. The songs range from beautiful ballads to bouncy jazz tunes. They have names like “Endless Rain,” “Wisteria and Sunshine” and “What If?” And they are sung by musical theater veterans, many of whom would not be out of place in an opera house.

Hocking is especially amusing as the bubbly, somewhat scatter-brained but extremely insightful Lotty. Cole provides an excellent complement to Lotty in the much more somber Rose, who is both charitable and conflicted. Watching Sims glide graceful across the stage under the disapproving glare of Cuervo is a delight in itself.

An Enchanted April may be too delicate for younger theatergoers who expect loud, often tuneless, music and explicit sex rather than discreet romance. But if you have a heart that longs to be warmed and a sense of humor that wants to be tickled, this is a musical not to be missed