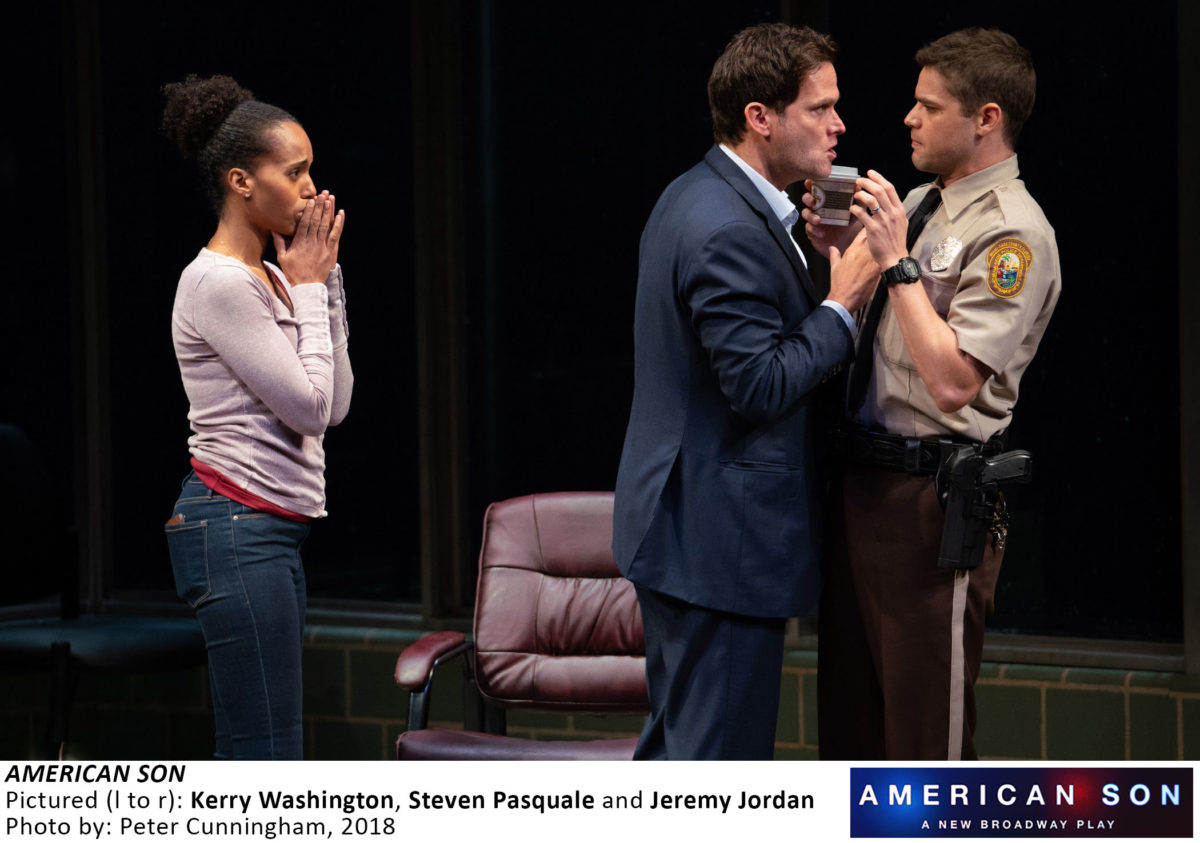 American Son, directed by Kenny Leon (A Raisin in the Sun), may have a ripped-from-the-headlines topicality, and it surely holds your attention for its 85 uninterrupted minutes, but it’s also mired in melodramatic contrivance, overwrought acting, and frequent implausibility.

Written by Christopher Demos-Brown, a former actor turned playwright who also happens to be a Miami civil trial attorney, the play—not unlike a TV procedural drama—is certainly on the right track thematically. Originally produced by the Barrington Stage Company, Pittsfield, MA, in 2016, where it was staged by the esteemed Julianne Boyd, the play tackles the tragically familiar problem of what happens when young blacks (men, mostly) have run-ins with the police.

Coming at the issues from various angles to show all sides, Demos-Brown crafts a domestic drama about an estranged couple, the black Kendra Connor (a de-glamorized Kerry Washington), a psychology professor, and the white Scott Connor (Steven Pasquale, looking the part), an FBI agent. The pair are brought together when their academically, athletically, and musically talented, 6’2”, 18-year-old son, Jamal, goes missing after an argument with Kendra.

It’s 4:00 AM in a Miami, FL, police station waiting room (looking, in Derek McLane’s design, more like an apartment house lobby). Outside the large glass windows, lightning flashes (thanks to lighting designer Peter Kaszorowski) as distractingly phony stage rain pours down. Kendra is driving the young night shift officer, Paul Larkin (Jeremy Jordan), new on this job, up the wall with her insistent demands for information about her son’s whereabouts, and her defiant responses to his sometimes racially insensitive questions.

He, for his part, although trying to be nice—which Kendra cynically declares to be based on “managing” techniques he’s been taught—says he’s hamstrung by the lack of info as well as the protocols he must follow. He does inform Kendra that Jamal and his Lexus have been involved in some sort of incident. The details creep out only very slowly as the night advances, particularly after Scott shows up and Officer Larkin, awed by Scott’s FBI badge, opens up a bit more.

As Scott, trying to keeping cool, and Kendra, volatile and often openly hostile (toward everyone), discuss their fractured relationship (replete with sentimental memories) and their upbringing of Jamal, various racial themes arise. These even include a section about why their son was given the black-leaning name Jamal, when—if you can believe it—Scott, whose background is Irish, would have preferred Seamus!

They also bicker, unconvincingly, when Kendra criticizes Scott for using colloquial expressions like “a whole nother thing,” or “Alls I’m saying.” Given his otherwise perfectly sound discourse, these seem planted just to provoke a discussion about how Kendra has raised Jamal to speak standard English, not “Ebonics.”

Jamal has been educated at an elite Miami school, where his isolation as one of the school’s only black students has made him feel he’s “The Face of the Race.” He’s recently adopted a hip-hop look, with corn rows and baggy pants, decided to abandon going to West Point, where he’s been accepted, and gone so far as to paste a bumper sticker on his car, with a slogan emphasizing the words “Shoot Cops.”

All of this his indulgent mother finds reasons to dismiss in stereotypical dialogue (“It’s just a phase he’ll get over”). Her attitude only serves to create conflicts with her more conservative spouse, who nonetheless believes this experience will produce a “teachable moment” in the family dynamic.

Eventually, in a far-too-convenient melodramatic development, Scott receives a video link sent by his brother, whose TV job involves watching what comes in from police scanners. Jamal’s fate now comes into focus.

On the other hand, Stokes’s stinging rebuke to Kendra, showing the police side of the issues as filtered through a black detective, is one of the play’s sharpest moments. It forces you to approve or disapprove of his advice that young blacks stopped by the cops should “just shut their mouths and” do “as they’re told” to prevent escalating the situation.

Dramatic necessity, though, not authenticity, then forces Stokes to offer, in considerable detail, the official report on what the grainy video reveals, something that might, in real life, take days to resolve. But, hey, we’ve got a play to finish here.

An American Son raises important questions regarding the criminal justice system. We even hear the words “Black Lives Matter” and the names of such victims as Philando Castile, Eric Garner, and Tamir Rice. Demos-Brown interrogates the dilemmas confronting mixed-race children; the dangers facing young, black men in America as well as those affecting police officers; racial profiling; police accountability; and so forth.

However, Kendra and Scott are too artificially drawn to make their particular predicament believable, a situation exacerbated by the plot’s too-obvious mechanics. The absence of Jamal, too, is a serious drawback, as we have nothing but the eyes of his parents with which to view him. Moreover, given the appearances of Washington and Pasquale, we’re forced to wonder what he looks like, and, despite the constant references to his skin color—he’s always referred to as “black,” not “white”—just what that actually means.

Kerry Washington and Steven Pasquale, both notably gifted stars, are impassioned but they fail to make their characters either sympathetic or well-rounded. While we understand Kendra’s frustration, Washington’s performance is particularly one-dimensional with her constant tears and shouted outbursts. Jeremy Jordan as the flustered but well-meaning cop is more recognizably human and Eugene Lee makes Lt. Stokes a formidable presence.

If you’re looking for didactic theatre challenging the never-ending stream of America’s black sons being shot by cops (including black ones), American Son is for you. It may not be great drama but it at least comes loaded with teachable moments.