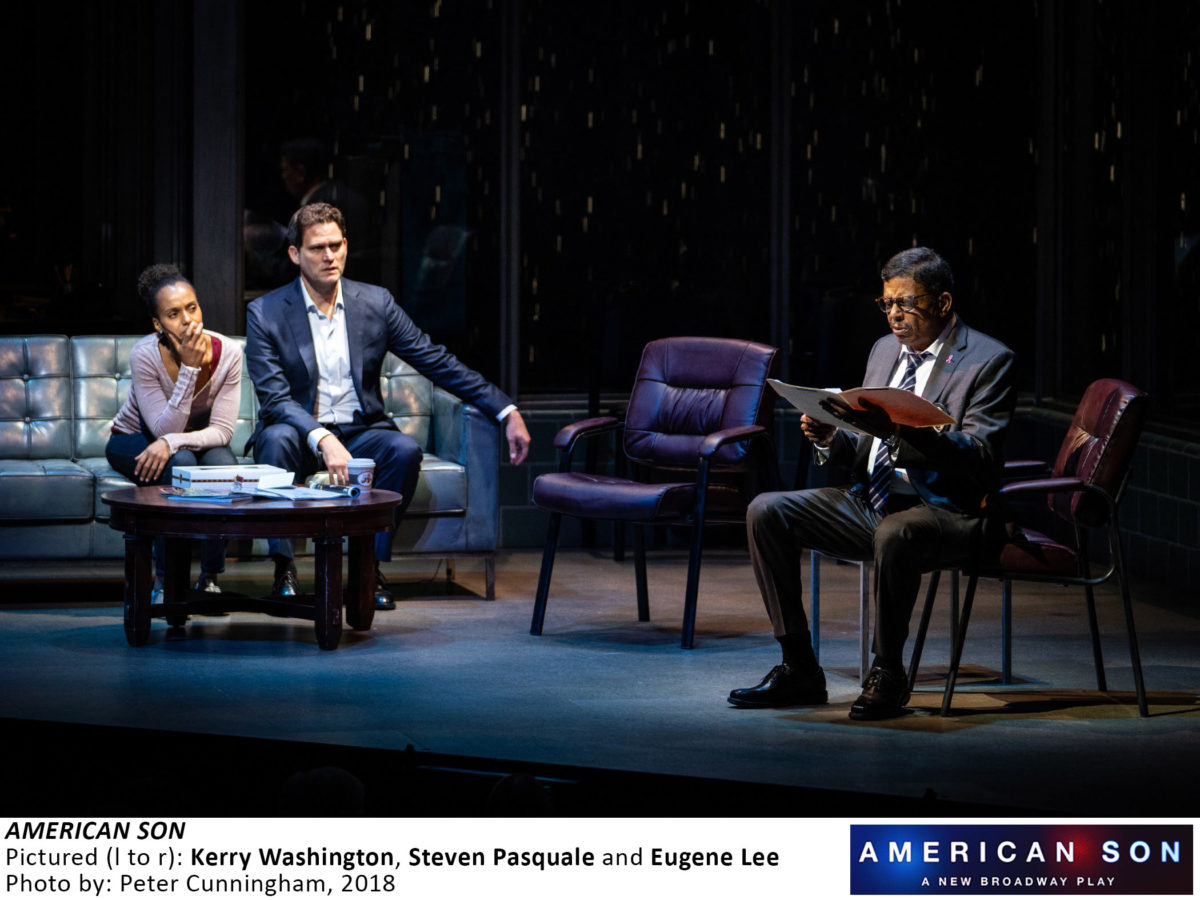 If you’ve been watching Washington in her powerhouse role on the ABC series, Scandal, you may not even recognize her here. For one thing, she wears jeans and a top, throughout the show’s 90 minutes, and she doesn’t even look like she’s wearing makeup. Olivia Pope wouldn’t be caught dead without a fashion trending wardrobe, but Washington is at her best, playing a mom who is also an accomplished professional woman, on Broadway.

In fact, I only recognized her for the clarity of her diction. Olivia always speaks very clearly. But diction is also a concern to the character Washington portrays here, a divorced mother of an 18-year-old, 6’2” son whose dad (Stephen Pasquale) is white. Jamal, their son, has perfect diction because his mother taught it to him.

The divorced dad, and proud Irish FBI agent arrives at the police station, where Kendra is trying to find out where their son is. It’s the middle of the night, and he’s been missing since 8pm, when he took the Lexus his dad gifted him to go out with his friends. Jamal has plastered a bumper sticker on it that reads, “Shoot Cops” in big letters. And in small letters, “with your phone whenever they make a bust.” More grist for his mother’s fears about where he now is and why.

And when his parents are told that there were three other African American teenage boys in the car, one of whom has a drug record, their fears ratchet into high gear.

Yes, the cops are the most feared when your prep school son is African American, angry at his dad for leaving him, and unwilling to carry the Irish family tradition, of a career in law enforcement. West Point may want to welcome Jamal, but he’s not going.

Indeed, Christopher Demos-Brown’s new play is highly didactic, addressing the conflicts that prevail between the police and the Black Lives Matter movement.  That such obvious proselytizing could be equally strong as drama would seem unlikely. But the narrative drives the issue in such a heated and unflinching way, that it is fully engaging. And it’s not moralizing, especially. The situation, and the issue simply is what it is. Black people have problems with cops, and cops have big problems dealing with black people.

As helmed by Kenny Leon, the stakes are high. Tension, and disbelief drive this 90-minute drama. Even the opening scene, when Kendra arrives at the police station to meet with the cop on duty, makes quite an interesting dance. The current of conflict, between the African American mother and the Officer is just stiffening. As the officer, Jeremy Jordan, the actor who cut his teeth as the lead in the Broadway musical, Newsies, seems particularly natural here, as an easy-going, well-intended, honest, albeit racially unconscious, and unconscionable police officer.

The fact that he simply refuses to give Kendra and her ex-husband any information is a mind bender. These two parties are at warring odds. And when the long-awaited Lieutenant Stokes arrives, the only man who has the authority to respond to their questions, he is mean, indifferent, forceful, more rigid than any cop you’ve ever seen, and he is African American. In this role, Eugene Lee rises to the occasion. Lee plays it so straight that it’s creepy.

Pasquale and Washington have explosive chemistry onstage. His emotions run the gamut from stern to vulnerable, from angry to frightened, to devastated, and feeble. And Washington really proves her chops. Raw, intense, on stage for the entire 90 minutes, she keeps the show moving, preaching to the choir with all her guts.