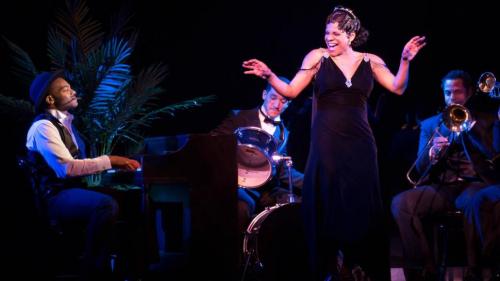 American Psycho tries for cold-blooded satire and Tuck Everlasting makes a bid for the Wicked-Matilda family-friendly demographic. Neither is particularly successful in hitting its target. Waitress scores a near bull’s-eye, landing solidly in the middle with its feel-good “up” story of a downtrodden heroine overcoming a dysfunctional homelife and limited economic opportunity. To use the story’s small-town diner food metaphors, the recipe perfectly balances the sweet and tart elements. But Shuffle Along aims even higher, going far beyond the normal range of Main Stem entertainment into the realm of social and cultural history. That sound stuffy, but Shuffle shakes the dust off the original show serving as its source and turns it into a spectacle both informative and vibrant.

As you enter each of the four theaters, you get a tip-off about the resident show before it even starts. At the Gerald Schoenfeld for American Psycho, you notice a drop in temperature, menacing rock-edged music, and a plastic screen at the front of the stage indicating you’re in for an evening of blood-splattered mayhem. One of the ushers assured me no one in the front rows would get doused with red stage liquid. While vast quantities of the crimson stuff is spilled during the course of this stage version of Bret Easton Ellis’ controversial novel, the enterprise is relatively bloodless. Yes, Rupert Goold’s production is as sleek as Es Devlin’s silver-and-grey corporate set and Katrina Lindsay’s chic costumes. And yes, Roberto Aguirre-Sacasa’s edgy book and Duncan Sheik’s jagged, catchy songs create a screamingly funny picture of a soulless 1980s Manhattan. But Patrick Bateman, the stylish serial killer-investment banker at the center is a cipher (despite a charismatic performance by Benjamin Walker). Ellis’ anti-hero is an abstract symbol of Reagan-era materialism. We learn very little about him other than the fact that he’s driven to insane acts of violence by the period’s shallow values. Without a strong protagonist for the audience to identify with, your show is DOA (pun intended.)

The first act does garner numerous laughs of recognition at the mention of ’80s icons as well as ironic references to Donald Trump and Tom Cruise. (Too many of Sheik’s lyrics amount to lists of famous names and places such as designer Betsy Johnson and the nightclub Tunnel.) But as the quips run out and the bodies pile up, tedium sets in. Too bad Walker and a strong supporting cast including Tony winner Alice Ripley are largely wasted.

The Broadhurst where Tuck Everlasting—the syrupy tuner based on Natalie Babbitt’s popular young-adult novel—is playing, offers a pleasanter prospect than the Schoenfeld. Instead of an urban wasteland, Tuck set designer Walt Spangler offers us an idyllic rural glade with an enormous tree stretching out over the audience. The show that follows is as sweet as Psycho is sour, but both share a certain “ick” factor. The fanciful plot revolves around Winnie (an assured Sarah Charles Lewis), a lonely 11-year-old girl in 1890s New Hampshire encountering a family of immortals. Their longevity derives from a magic spring (cute, huh?). Jesse (chipper Andrew Keenan-Bolger), the youngest son who appears 17 but is actually over 100, persuades Winnie to save some of the enchanted water and drink it when she is in her late teens so they can be together—forever! A 100-year-old boy interested in an 11-year-old child? Creepy, right?

Even more off-putting is Terrence Mann as the Man in the Yellow Suit, a carnival con artist out to steal the water for himself. Mann, who starred in the original companies of such Broadway classics as Cats and Les Miserables, turns in one of the most annoying performances in recent memory. Villains can be deliciously odious, but Mann is just plain repulsive. Fortunately, directory-choreographer Casey Nicholaw delivers a tight production counterbalancing the sugary content of Claudia Shear and Tim Federle’s book. The Scottish-country flavored songs by Chris Miller (music) and Nathan Tyson (lyrics) are serviceable enough, but hardly memorable. The one number that stands out is a throwaway comedy bit expertly put across by the reliable Fred Applegate as a folksy detective and Michael Wartella as his shy deputy. When two minor characters have the best song, something is off. As the rest of the Tuck clan, Broadway vets Carolee Carmello, Michael Park, and Robert Lenzi earn their paychecks but don’t get beyond well-scrubbed eccentricities. Young children may get a kick out of Tuck Everlasting, but for those past adolescence its charms fail to last past intermission.

The pre-show sensory sensations awaiting audiences at the Brooks Atkinson for Waitress are not visual, but olfactory. The smell of just-baked apple pie wafts through the lobby as you take your seats, putting you in the mood for comfort food and comfort theater. Apart from one over-the-top nasty character, book-writer Jessie Nelson and composer-lyricist Sara Bareilles deliver exactly what the menu promises: a warm and tender slice of pie that’s filling without making your teeth rot. Derived from Adrienne Shelly’s indie-cult film, the story centers on Jenna, a struggling server in a small-town diner with a genius for baking pies with eccentric names (Mermaid Marshmellow and Ginger Snap Out of It are just two examples). Saddled with an abusive husband and an unexpected pregnant, she vows to enter a pie contest, take the prize money and run away with her new baby. Along the way, she launches an affair with her gynecologist and her comic-sidekicks at the diner provide ribald romantic subplots.

Refreshingly, neither her doctor-lover nor the pie contest prove to be the cure-all for Jenna’s woes. Just as in real life, situations remain messy instead of being neatly resolved. My only problem was the depiction of Earl, the asshole husband who is so disgusting it’s hard to believe a smart woman like Jenna would ever have fallen for him. Nick Cordero does his best to add dimension to this narrow role but cannot fill in the gaps the authors left. Diane Paulus’ generally smooth direction gets a little too busy and the sound design in muddy in places.

Aside from the quibbles, Waitress is a bountiful pleasure. Jessie Mueller’s unique voice which straddles pop territory and Broadway pizzazz imbues Jenna with the tender longing of a generous soul unfulfilled. Keala Settle and Kimiko Glen bubble and fizz as Becky and Dawn, her fellow toilers in the service industry while Christopher Fitzgerald stops the show as Dawn’s eccentric suitor. Drew Gehling makes goofy sexy as Jenna’s medical amour and Dakin Matthews is gorgeously grumpy as the restaurant owner. Special mention to Charity Angel Dawson who steals her brief scenes as a caustic nurse.

As you enter the Music Box for Shuffle Along, you can hear the sounds of snappy tapping and the bright voices of the dancers encouraging each other from just behind the curtain, preparing you for an evening of extravagant song and dance. However, director-book author George C. Wolfe has concocted much more than a restaging of the original 1921 show of the same name, the first major Broadway hit to be directed, produced, written, and performed by African-Americans. He adds historical context in a behind-the-scenes template, documenting the struggles of black artists in a white-dominated world. Wolfe makes the case that Shuffle was as influential as Show Boat or Oklahoma! George Gershwin borrowed riffs from the overture, Ziegfeld hired the chorus girls to show his chorines how to shimmy, and future stars such as Josephine Baker and Paul Robeson got their start in the show. But because of the creators’ race, Shuffle has been largely shuffled out of the musical theater history deck.

It sounds like a masters’ dissertation or a Ken Burns documentary, but this is much more than a lecture—it’s a rumination on black culture and white appropriation as well as a dazzling spectacle thanks to Wolfe’s inventive production and Savion Glover’s scintillating choreography. The cast list is a roll call of Broadway excellence—Brian Stokes Mitchell’s dignified baritone, Billy Porter’s impassioned blues wail, Brandon Victor Dixon’s cocky enthusiasm, Joshua Henry’s attractive confidence, Adrienne Warren’s cute appeal, and of course the majesty and intimacy of six-time Tony winner Audra McDonald’s Lottie Gee, the diva who dominates and charms.

Just as a sidenote, Off-Broadway’s Cagney has a formulaic bio-pic book by Peter Colley but razor-sharp choreography by Joshua Bergasse and an impressive lead performance by Robert Creighton who also collaborated on the score with Christopher McGovern. The engine of the plot is Cagney’s battle with studio boss Jack Warner and the star’s yearning to stretch beyond the tough-guy roles for which he became famous. A rather limiting frame for the story and Colley often shoehorns in musical numbers such as a tap challenge between Cagney and Bob Hope because the former appeared briefly in one of Hope’s pictures. Despite the book’s hiccups, Creighton and company dance with joy. It’s a brisk if unchallenging piece unlike Shuffle which totally reinvents the musical theater form. 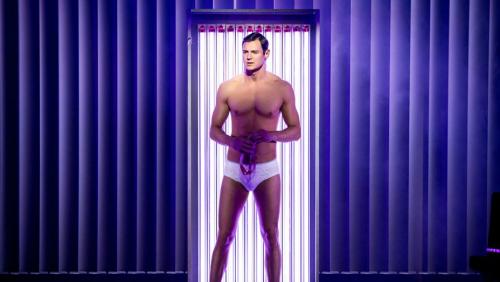 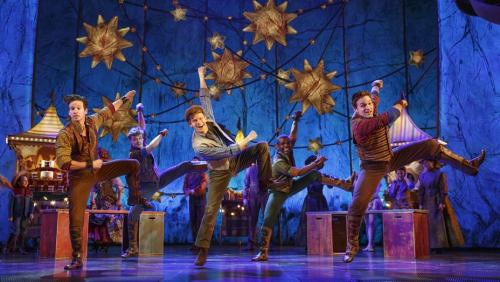 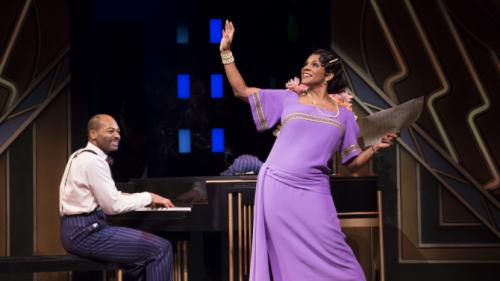 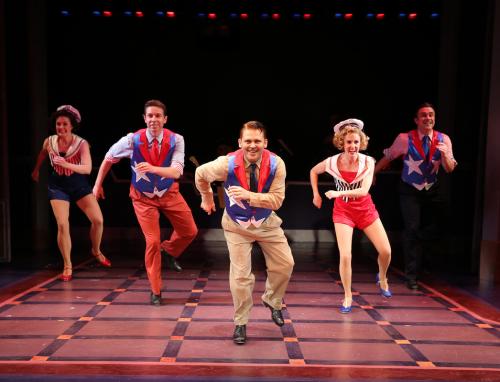