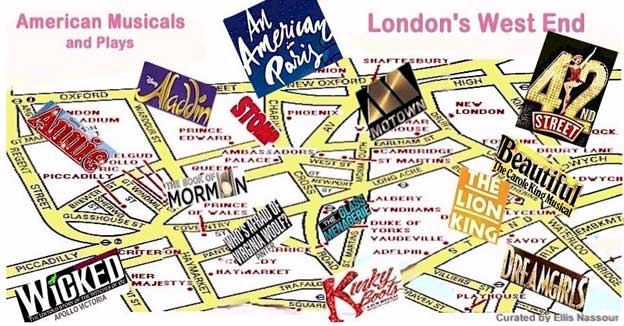 Currently on the boards are: Disney’s Aladdin and The Lion King; An American in Paris, which just opened to across-the-boards raves; Beautiful; The Book of Mormon; , in its West End premiere; Kinky Boots; Motown; Wicked; and, not to be forgotten, Stomp.  Jersey Boys just closed after nine years. The first revival of 42nd Street is in previews and opens in a week.

Coming in May is a Annie revival; Audra McDonald in Lady Day at Emerson’s Bar & Grill, a 12-week engagement beginning June 17; and, on September 28, Mel Brooks’ Young Frankenstein, choreographed and directed by Susan Stroman.

In November, and quite eagerly anticipated, the groundbreaking Tony-winning Hamilton opens at the 1,500 plus seat Victoria Palace, now undergoing a multi-million pound top-to-bottom renovation and reconstruction.

The two American musicals currently all the buzz are former Royal Ballet dancer Christopher Weldon’s An American in Paris, which one critic called “an instant classic”; and the first revival of Gower Champion’s 42nd Street.

It appears the West End will have a highly competitive battle of American musicals. The Tony-nominated Best Musical (with 14 nominations) An American in Paris stars Broadway and Paris leads New York City Ballet’s Robert Fairchild, Royal Ballet principal Leanne Cope, and a company of 40 plus, is at the former large cinema, the Dominion. Fairchild, Cope, and the production received rapturous notices. It won for Choreography, Director, Orchestrations, Scenic Design (Bob Crowley), and Lighting (Natasha Katz). In addition, there were 13 Drama Desk nominations, including for Musical — with, among its three wins, Weldon for Choreography.

Joyous, and sometimes dark, it’s a blend of ballet, jazz, and tap, stunning design, and memorable Gershwins’ classics such as “I Got Rhythm,” “But Not for Me”,  “Liza,” “The Man I Love,” “Shall We Dance,” “’S Wonderful,” “They Can’t Take That Away from Me,” and the soaring Mittyesque fantasy filled with ostrich-plumed chorus girls, “Stairway to Paradise.”

Set in post-war Paris, it takes liberties with the 1951Academy Award-winning film that inspires it. Army veteran Jerry Mulligan falls in love with the City of Love, where he’s keen to begin a new life and nurture his passion as a painter, especially after he falls for ballerina Lise, who’s spoken for by Henri, the son of the family who protected her from the Nazis.

The musical co-stars David Seadon-Young as the war-maimed, acerbic Jewish composer Adam Hochberg (one of his great lines: “Who says music needs to cheer people up?”), who’s also in love with Lise; Haydn Oakley as Henri Baurel, who hides a secret passion to be a nightclub singer; Zoë Rainey as rich American arts patron Milo Davenport, who has eyes on Jerry; and former child star with a later career on TV (including Dr. Who) and in film (including 1966’s Alfie) and best-selling author Jane Asher as Madame Baurel (she was formerly engaged to Paul McCartney, whom she met at 17 when she interviewed the Beatles).

42nd Street, billed as “Broadway’s biggest show on London’s biggest stage,” opens next week at the historic (1812) Theatre Royal Drury Lane, where it premiered in 1984, winning the Olivier for Best Musical. Its score of Tin Pan Alley hits include “About a Quarter to Nine,” “Boulevard of Broken Dreams,” “Dames,” “Getting Out of Town,” “I Only Have  Eyes for You,” “Keep Young and Beautiful,”  “You’re Getting to Be a Habit with Me,” “With Plenty of Money and You,” and those four showstoppers “42nd Street,” “Lullaby of Broadway,” “Shuffle Off to Buffalo,” and “We’re in the Money.”

Based on the 1931 musical film noir directed by Lloyd Bacon with groundbreaking choreography by Busby Berkeley, it’s headlined by two-time Grammy winner with over 200-million records sold Sheena Easton as Dorothy Brock.

The plot is set against a producer’s comeback effort with a big musical, which on the eve of its opening loses its leading lady former chart-topping recording artist Sheena Easton; and how the ingénue steps in and becomes a star.

There’s a stage-filling cast of 55 plus, which includes the largest dance ensemble ever, and orchestra of 20 plus. Co-stars are Clare Haise as Peggy Sawyer; Tom Lister as Julian Marsh; Stewart Neal as tapper Billy Lawler; Jasha Ivir as brassy  co-composer Maggie Jones; and Christopher Howell as her partner.

Directing is Mark Bramble. Todd Ellison is music supervisor, with music direction by the lively veteran Jae Alexander. Sets are by Douglas Schmidt.

There’s Champion’s choreography and new choreography by four-time Tony and three Drama Desk-nominee Randy Skinner, who with Karin Baker, was Champion’s tap associate on the Tony-winning 1980 Broadway premiere. Skinner was choreographer for the Tony and DD-winning 2001 Broadway revival, as well as national tours and numerous international productions.

American musicals received just-announced Olivier Award nominations: Best New Musical: Dreamgirls at the Art Deco Savoy Theatre, with Amber Riley getting a nod as Best Actress; and Groundhog Day [in previews here], which played at the Old Vic – with Andy Karl and Andrew Langtree nods for Best Actor and Best Supporting Actor, respectively. In the Best Actress category, Glenn Close was nominated for the Sunset Boulevard revival, which played at the huge Coliseum, and is now on Broadway at the Palace. The Awards are announced April 9.

London’s West End, Equity not-for-profit, and first-class Fringe theatres total over 75, compared with 50 here [which would include the top Off Broadway houses]. At the moment, American/Broadway musicals are dominating the West End. Where plays in smaller houses are concerned, limited runs are the thing. Before one production is loaded out, another loads in.

Revivals, especially of the works of stellar British playwrights, are always on; and London boasts some prestigious Fringe houses, such as the Royal Court and Really Useful Company’s The Other Palace [formerly the St. James (it’s neighbor is the historic Victoria Palace)], which focuses on new musicals and revivals. They just closed a revival of Michael John La Chiusa and George C. Wolfe’s The Wild Party. April 4-15 will be This Joint is Jumpin’, a celebration of Fat Waller’s music, which will headline Tony winner Lillias White. From May 30 – July 8, TOP will present Belgrade Theatre Coventry’s production of Benji Bower’s La Strada, based on the Fellini film (not to be confused with Lionel Bart/Charles Peck’s 1969 one-night-only Broadway production which starred Bernadette Peters and Larry Kert). Directing will be Sally Cookson (National Theatre’s Jane Eyre).

The Royal National on London’s South Bank across Waterloo Bridge, which was founded by Sir Laurence Oliver, is publicly-funded as is the Royal Shakespeare Company and Royal Opera. In that vicinity, across Blackfrairs, Millennium, and London Bridges, you’ll find the Young Vic and Shakespeare’s Globe. In the area is also the Menier Chocolate Factory, known for its innovative revivals (most recently: Into the Woods; Funny Girl, which transferred to the West End; and She Loves Me).