MAY 13, 2022: David Mamet’s American Buffalo, often considered a modern, if minor, American classic, has been produced countless times worldwide since its late 1975 premiere at Chicago’s Goodman Theatre. It was shown soon after, in January 1976, for 16 performances, at Off Broadway’s St. Clement’s Theatre, with Mike Kellin as petty hoodlum Walter Cole (“Teach”), Michael Egan as junkshop owner Donny Dubrow, and J.T. Walsh as their young, drug-addled acolyte, Bobby. Around a year later came a dynamic Broadway production, starring a feral Robert Duvall in the commanding role of Teach, Kenneth McMillan as Donny, and John Savage—in a breakthrough performance—as Bobby. 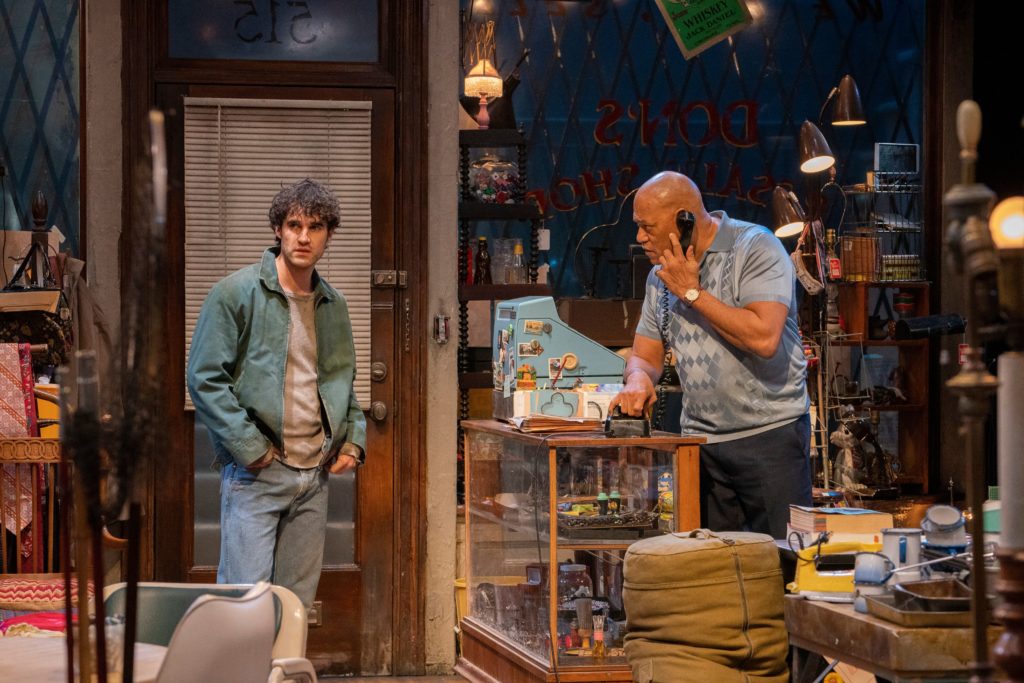 MAY 13, 2022: David Mamet’s American Buffalo, often considered a modern, if minor, American classic, has been produced countless times worldwide since its late 1975 premiere at Chicago’s Goodman Theatre. It was shown soon after, in January 1976, for 16 performances, at Off Broadway’s St. Clement’s Theatre, with Mike Kellin as petty hoodlum Walter Cole (“Teach”), Michael Egan as junkshop owner Donny Dubrow, and J.T. Walsh as their young, drug-addled acolyte, Bobby. Around a year later came a dynamic Broadway production, starring a feral Robert Duvall in the commanding role of Teach, Kenneth McMillan as Donny, and John Savage—in a breakthrough performance—as Bobby.

That production, which opened in February 1977, and ran for 135 performances, was followed only four years later, in June 1981, by an equally potent, Off-Broadway run at the downtown Circle in the Square (on Bleecker Street) starring Duvall’s Godfather costar Al Pacino as Teach, with Clifton Daniel as Donny and Thomas Waites as Bobby. It ran 231 packed performances. Not long after, in October 1983, it moved with Pacino to Broadway, but with J.J. Johnson as Donny, and James Hayden as Bobby. In 2000, a mediocre Off-Broadway version at the Atlantic Theatre Company starred William H. Macy as Teach, with Philip Baker Hall as Donny, and Mark Webber as Bobby, while another second-rate production followed on Broadway in 2008, starring John Leguizimo as Teach, Cedric the Entertainer as Donny, and Haley Joel Osment as Bobby; even with 20 previews, it lasted less than a month.

The 1996 movie, had Dustin Hoffman as Teach, Dennis Frantz as Donny, and Sean Nelson as Bobby, allowing us to celebrate a trifecta of three of the greatest actors of the late 20th century having played Teach: Duvall, Pacino, and Hoffman! Neither Macy nor Leguizimo were in the same galaxy.  Whoever might have sought to challenge the legacy of Duv-Pac-Hoff, especially in the wake of the Macy-Leguizimo debacles, would need cojones the size of softballs. For many viewers, that actor has arrived at the (uptown) Circle in the Square in the presence of Tony-nominated Sam Rockwell, adding yet another reason to consider him one of our most versatile leading men, on stage and screen.

This Tony-nominated revival, like the Off-Broadway one of 1981, is in the three-quarters round, for which Tony-nominated set designer Scott Pask has filled the long, U-shaped space, as well as the rafters, with a bargain hunter’s fantasy of second-hand items, from irons to hockey sticks to boxing gloves. Tyler Micoleau does his usual magic with the lights.

Mamet’s three-hander, famed for its patois of unapologetically profane Chicago hoodlum chatter, also benefits from the all-star presence of Laurence Fishburne (just over a Covid attack that postponed my original visit) as Donny, and Darren Criss as Bobby.

Mamet’s allegorical excoriation of the corruption of American business ethics, mired in self-serving avarice, masculine toxicity, and ruthless competition to the detriment of personal relationships, is embodied in the tale of three Chicago thieves who plot to rob the home of a man who bought an American buffalo-head nickel from Donny’s Resale Shop. Conspiring with Donny to steal the customer’s presumed coin collection is his fast-talking, tastelessly dressed crony, Teach, convinced of his own cleverness despite his apparent, even comical, ineptness.

Much of the thinly plotted action concerns whether these wannabe crooks want to include Donny’s thickheaded, junkie gofer, Bobby, in the heist, or enlist instead another crony, the unseen Fletcher, who won a bundle at cards from them the night before, and whom Teach labels a cheat. Soon enough, the plotters’ maladroitness impedes their progress, an act of violence disrupts the process, and the play sort of whimpers to its fruitless conclusion.

Much of the reason American Buffalo is so compelling, when well-cast, is the delivery of the often vulgar patois, with its overlapping speeches, and choppy, naturalistic, seemingly “overheard” conversations, including shorthand expressions of shared knowledge (“the thing,” “the shot,” etc.), which require close listening before you get what those things and shots are. When originally heard on Broadway stages in the earthy delivery of actors Duvall and Pacino, who wore their roles as if they were sewn into them, Mamet’s profanity startled many theatregoers. By now, however, the barrage of such verbiage in plays, movies, cable, and streaming over the decades has greatly softened the impact, allowing us to focus more on the characters and their behavior.

As such, with the shock value removed, the linguistic crafting becomes more obvious, which, in turn, heightens awareness of the characters’ artificiality, making their authenticity more dubious. Thus, regardless of the intelligent, committed, and animated work of Messrs. Rockwell, Fishburne, and Criss, it’s sometimes difficult, especially in the close confines of the Circle in the Square, not to view them as virtuosos demonstrating technical mastery rather than as fully convincing avatars of misguided mugs planning a foolish caper.

Nevertheless, Mr. Rockwell, his mismatched outfit perfectly chosen by costumer Dede Ayite, his greasy, unkempt hair crying out for scissors, makes memorable his seedy punk, wandering the junkshop aisles, keeping his anxious hands restlessly handling prop after prop. Mr. Fishburne uses his husky presence gracefully, every now and then rolling a burly shoulder as if to loosen its kinks before his next sparring match. And Mr. Criss, although not quite on the level of his veteran costars, maintains an appropriate semblance of blessed ignorance that earns him sympathy when, late in the play, a bit of well-timed savagery—created by the great fight director J. David Brimmer—puts him out of commission.

Directed with verve by Tony-nominated Neil Pepe, this American Buffalo is a solid enough reenactment of Mamet’s imperfect play, worthy of a visit even by liberals dismayed by the playwright’s politics. The production should satisfy most connoisseurs of fine acting, even those who, like me, saw Duvall, Pacino, and Hoffman rampage through Donny Dubrow’s junkshop.