November 5, 2022:  One of the most eagerly awaited musicals of the season, Almost Famous, based on Cameron Crowe’s semi-autographical 2000 film of the same name is a major disappointment, which can only happen when expectations are high. Set in the world of rock-and-roll, the film is arguable one of the finest coming of age movies ever made beautifully capturing the spirit of the era in which it was set, the 1970s. 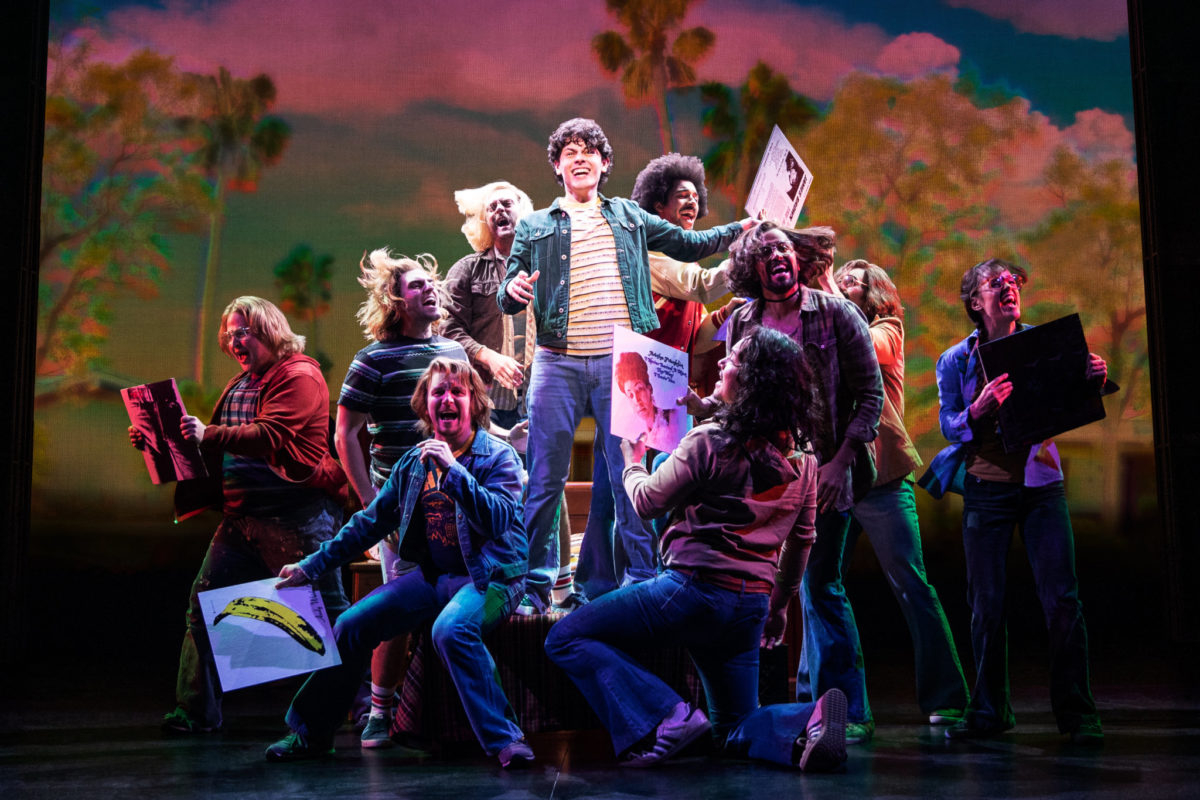 The Company of “Almost Famous”.

November 5, 2022:  One of the most eagerly awaited musicals of the season, Almost Famous, based on Cameron Crowe’s semi-autographical 2000 film of the same name is a major disappointment, which can only happen when expectations are high. Set in the world of rock-and-roll, the film is arguable one of the finest coming of age movies ever made beautifully capturing the spirit of the era in which it was set, the 1970s.

Cameron Crowe wrote and directed the film winning an Oscar for Best Original Screenplay in the process. Transferring it to Broadway Crowe teamed up with musical wizard Tom Kitt, the composer, who did the orchestrations and co-wrote the lyrics with him, as well as some new songs. Unfortunately, Crowe, who directed the musical and wrote the book from his Academy Award winning screenplay did not rethink his source material sufficiently for Broadway, probably feeling the songs would carry the day. And wonderful they are, but more is needed for the Broadway stage.

The story, based on Crowe’s own experiences, is a faithful adaption of the film and follows 15-year-old, William Miller, a stand in for Crowe, played by Casey Likes. Intent on becoming a rock journalist, the young boy gets pulled into the world of roadies and rock bands. He finds a mentor in a rock writer Bangs, played by Rob Colletti, who helps him win a coveted assignment from Rolling Strone Magazine.

Believing he is much older, they send him out to cover a mediocre band called Stillwater, which is a composite of many of the groups Crowe actually toured with. On the road his moral compass will be challenged and his mother with nag him relentlessly by telephone and song attempting to keep her son from being corrupted.

Dazzled by the scene and wanting to be accepted the young Miller finds his desires at odds with the warning his mentor is giving him – not to befriend his subjects. Bangs informs him these guys will charm you until you write exactly what they want to hear. He tells the young William, “They will make you feel cool, and you are not cool.”

The film, a comedy/drama, worked on many levels. However, the stage version feels merely like a love triangle with the young William being thrust in between the ethereal groupie, Penny Lane, played by Solea Pfeiffer and the charismatic lead guitarist of the band, Russell Hammond, played by Chris Wood. What the music means to them is not made clear and how the rock revolution changed our views of celebrities.

These aspects of the story are lost in the stage transition. Art was an important theme of the film – the passionate desire to be authentic, to avoid commercialism. This isn’t really explored in the Broadway staging and the characters except for William, Penny, and Russell, feel like caricatures that blend into the background.

Still, for all the missed opportunities, much of the evening is entertaining, especially the songs, even when they do not necessarily advance the plot in any meaningful way. The covers of hits from the era hit the right note of nostalgia.  The new songs by Tom Kitt fit in perfectly with the story creating personal moments for the performers to shine and are the highlights of the evening.

Young William’s haunting song, “No Friends,” and Penny’s contemplative, “Morocco,” along with her duet with Russel, “The Nighttime Sky’s Got Nothing On You,” are the most affective moments of the evening. They hit moving cords of loneliness, yearning, and love.

The performers lift the evening to a new level with these songs, and we are reminded of what could have been. Kitt’s arrangements and orchestrations could not be better. The music direction by Bryan Perri and the sound design by Peter Hylenski are superb.

The direction by Jeremy Herrin is constantly in motion, never stopping, and rarely slowing down, so scenes that could resonate strongly fall flat. For example, when Hammond takes acid and dives from the roof of a house into a swimming pool. And when the band’s plane almost crashes in a storm and they are all terrified they might die. These scenes are almost cringe inducing and you wonder how this could be happening on a Broadway stage.

The singers all have terrific voices with somewhat limited acting skill. Two exceptions are the lovely Solea Pfeiffer as the ethereal Penny Lane, who has a strong presence, and the delightful Casey Likes, who creates a memorable portrayal of the young Crowe.  I only wish he had more to do or at least another song.

If you liked the film, you may be very happy with this Broadway staging, but if you are anything like me, you would like a bit more.