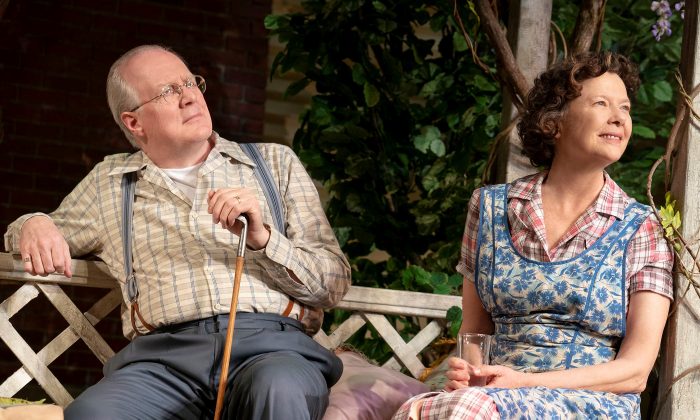 Tracy Letts is well cast here, as the award-winning playwright/actor is from the Midwest, where the play is set. Portraying the family patriarch, Joe Keller, the proprietor of a well-established manufacturing company, he grounds this production. A man who discovered prosperity building bombs for the army in WWII, he is admittedly a man of no education.

In many ways, Keller is another version of Miller’s quintessential anti-hero, Willy Loman in Death of A Salesman. But, unlike Willy, Joe has achieved the American Dream. Successful and wealthy, he remains a banal man, reading the help wanted ads in the Sunday newspaper, chatting with neighbors, and his son. He seems as unruffled by the storm that tore up the yard last night, as he was by the war. He’s so ordinary in fact that he seems to just slug along. It’s a brilliant, understated portrayal of a man whose life is as unfulfilled, and whose ending is as tragic, as Loman’s.

As played by Annette Bening, Kate, his wife is a web of nerves, and hyper sensitivity. She can barely contain herself when a bag of potatoes goes missing. The contrast between them creates the frictional environment, and the sense of disbelief that anything could be so wrong.

The ensemble of neighbors, trying to overlook the demise of self-respect, and honor in their community, are all beautifully played. As the ex-fiancé of the Keller’s oldest son – the one who was killed in the war, Francesca Carpanini, gives a grounded, informed performance. And Hampton Fluker as her brother arrives shrouded in pathos, and shame at the Keller’s sordid contentment.

Ultimately, however, the challenge to the Keller Family’s position lies within. As their surviving son, Chris, Benjamin Walker delivers a highly insightful, and nuanced performance. Early in the play, reading the New York Times in the yard, he puts the paper down, talking casually about something to his father. But, in the midst of their shared commonality, he suddenly comments, “Shaw was an elephant.”

We gather he’s been reading the book review section. It’s 1947, and the article might even be about Arthur Miller’s new play. Decidedly, in this one, as delicately revived here, the playwright is none too subtle. In All My Sons, the contempt for corporate corruption, and for the ruthlessness and greed that drives men’s lives, is a brave message.

It’s a relentless story, revealing once again, the callousness of The American Dream.