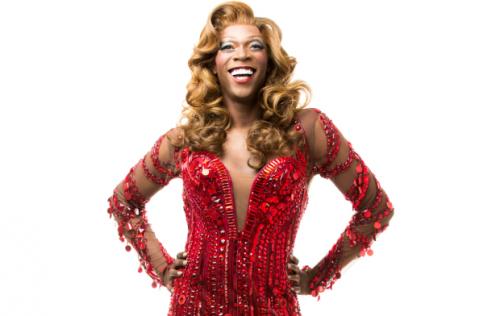 Walking in those heels was no easy feat for Mingo, who says he almost quit because of the pain; however, he continued to honor Lola’s diva, working sexy stilettos all the way to Broadway to replace Wayne Brady. The versatile actor, who is known for roles in The Little Mermaid, Rent and Shrek the Musical,spoke with TheaterLife.com about the road to Kinky Boots, his unique take on Lola, and his secret life as a gamer.

You went from lip syncing and singing with a band to Kinky Boots. How did that transpire?

I was singing pretty much all my life. When I was about 13 I was in a musical group and we used to do talent shows in Philadelphia. We did Puttin’ on the Hits, it was the first lip syncing show in the 80s. Some guys discovered us through that, and after the show they asked if we can really sing. Motown was interested in signing us, and even gave us money to record a demo. Unfortunately, our manager at the time took the money and recorded his two boys in the group and didn’t bring the rest of us.

My mom moved us to Maryland and I wound up going to drama school, where I fell in love with acting just as much as I loved singing. I wound up getting a scholarship to University of Maryland, which sort of paved my way. I decided to go right to grad school while I was still in the heat of education. If I went to New York right away, I wouldn’t go back to school! I wanted to explore more acting because I discovered it late. Classical acting intrigued me most. I went out to University of California, Irvine to work on Shakespeare, Moliere, Ibsen, etc. However, I soon realized that musicals were big out there. It was my first time asking myself, When education ends, where do I fit in the scheme of things? Someone made me audition for Rent. It was filled with rock music, and I was like, “This is not me! Are you kidding me?” Ten auditions later, I was on the tour and while everybody else was partying, I was in my hotel room writing my thesis to get my degree. Right after school I wound up getting my first job and haven’t stopped. I’ve been doing Broadway and Broadway national tours since. I’ve been really blessed.

You went into acting with the intention of performing classics, and then you ended up doing The Little Mermaid, Hairspray and Shrek the Musical. Have these upbeat, comical pieces become your preference?

Yes, but I think these pieces work hand in hand, which is so interesting. If you were to catch me four years ago when I was doing Shrek, I had just realized that I had played three animals on Broadway. I hadn’t even thought about that. Here I was trying to be a classical actor, and I wound up playing three different animals. But I know I was able to do it because of my classical background. A lot of the classical writers are still heightened, especially Shakespeare with his language, so you have to really work the language to get people to understand what you’re saying. With these animal characters, the character process was quite the same; there needs to be a heightened sense of self, but there’s still sort of a humanistic quality to which people can relate. Now I’m playing a human, thank you Jesus!

Lola epitomizes having a heightened sense of self! How did she fit into your career trajectory?

When Kinky Boots came it was a dream come true because I had been fighting to get in the show since it opened on Broadway. It’s almost surreal. I told my agent, “I need to do this show.” Eventually they gave me Toronto. I looked at Toronto as my audition for Broadway. When the call finally happened…people kept asking me how I felt, and I was like, “I don’t know. I’m just full.” It’s interesting, but when you get something you want, you don’t know what to do. I even feel weird saying it out loud, because it’s an odd thing to say.

Who was the first person to receive a call from you when you found out that you were moving to Broadway?

I called my mom and screamed. She had to play it cool. She said, “Well, we knew this was going to happen.”

What challenges did you have to overcome in making the transition from performing in Toronto to performing on Broadway?

There were small differences that I wasn’t ready for by the time I got to Broadway. Little things, like in “Everybody Say Yeah,” when we’re dancing on the treadmills (which looks deceptively simple!), everyone has jobs to do; you have to turn on a treadmill, break a treadmill, turn it off, turn it on, make it go double speed, etc.  Because we do it all in sync, if one person messes up you can actually throw people off a treadmill. No one warned me about an accent being on a whole different beat. When I noticed it, someone was coming right from behind me on the treadmill, and there was almost a domino effect! Little things like that were freaking me out. I knew if I messed up my eyes would have gotten bigger than they normally do, and they’re already huge.

How much of yourself do you see in Lola?

I think we all have a little bit of Lola in us, but for me being a gay, black man in theater as a career, and going to school for it and being focused on a career that doesn’t promise anything…that’s very much like Lola. I understand trying to live up to other people’s expectations, and then showing them out and saying, “I need to be me; when I am my full me, I will get more rewards out of life.” My own life has been similar to Lola’s, so I identify with her in so many ways. She allows me as an actor to fulfill so many other things that many shows don’t offer. There are not many roles that allow you to be feisty, confident, fearless (yet vulnerable), open-hearted, and then tell a good, intelligent story at the same time. The vocal and emotional range that this character has to go through night after night is God’s gift to actors. All of the shows that I’ve done earlier in my career, even the ones in which I played animals, have culminated into this one moment.

Surely none of your other roles quite prepared you for wearing heels?

When I got into rehearsals six days per week, eight hours each day, and I had to wear my heels pretty much the whole time…maybe seven days in I had to call my mom. I said, “I don’t know if I can do this.” The pain was unbearable. I couldn’t figure out how I would do it eight times each week. These aren’t kiddie heels. I’m not in the chunky heels- they’re stiletto. The boots are better because they lock your whole leg in, I don’t feel like I’m going to fall. It’s those shoes that are six inches, and don’t really go around your ankle. There were times when I ran the number “The Sex is in the Heel” and I could barely stand …and I had to run down stairs? I can barely run down the stairs in regular shoes without tripping! I remember that moment in rehearsal when I was like, “I can’t do this!”  My mom reassured me. She said, “Yes you can, that’s why you have six weeks to get used to it. Just do it!” But I will tell you, after my rehearsal process I have a newfound respect for women. There’s an awareness that women have to take on because society makes them take it on to adjust their clothing. I wasn’t even ready for the power that the boots give you. It’s a masculine feeling. I can do anything when I’m in those shoes.

When you do finally get to kick off those heels at the end of a long week, what would we find you doing?

I’m a gamer. World of Warcraft, Starcraft, old computer games, whole multi-player games, etc. It’s rare that anyone sees me in my gamey headset. On my days off I’m running game raids. The great thing is that I do have some people in the business that I “run” with, we call them guilds. I have some producers, directors and actors with whom I tend to run. Sometimes it takes a number of hours to do, so I’m a heavy gamer. Actually, I find it to be just like theater. When you’re backstage you hear, “Lights go, set move.” Running a raid is the same kind of thing but in a video game world…minus the heels! 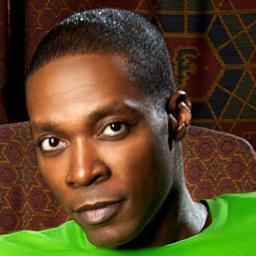