April 8, 2019: As Kermit the Frog reminded us, it’s not easy being a color different from that of the dominant culture. Some black American playwrights, especially since the 1960s, have satirized their frustrations with such unease by creating seemingly outlandish situations in plays located somewhere on the absurdist spectrum. In 1965, for instance, in the days of the black theatre movement, Douglas Turner Ward’s one-act, “Day of Absence,” considered the reactions of a Southern town’s whites (played by blacks in whiteface) to the sudden disappearance of all the local blacks. 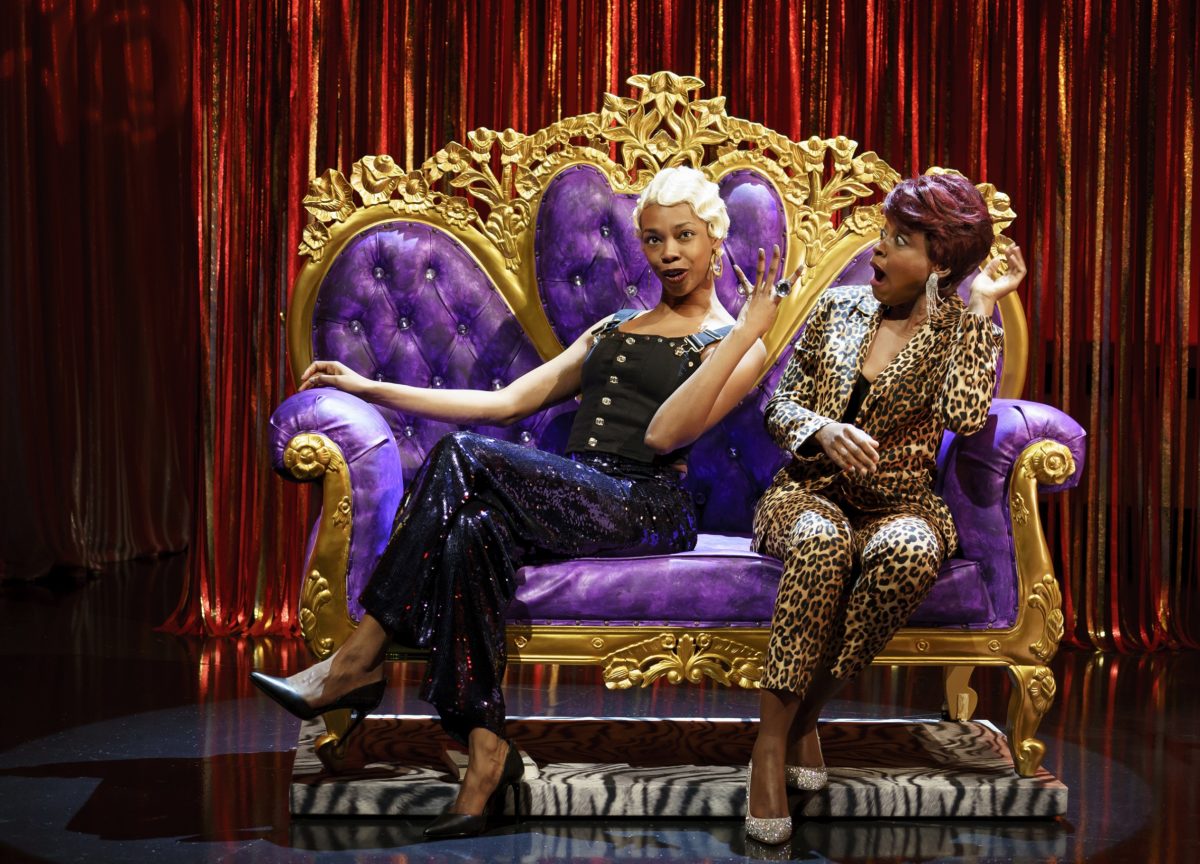 April 8, 2019: As Kermit the Frog reminded us, it’s not easy being a color different from that of the dominant culture. Some black American playwrights, especially since the 1960s, have satirized their frustrations with such unease by creating seemingly outlandish situations in plays located somewhere on the absurdist spectrum. In 1965, for instance, in the days of the black theatre movement, Douglas Turner Ward’s one-act, “Day of Absence,” considered the reactions of a Southern town’s whites (played by blacks in whiteface) to the sudden disappearance of all the local blacks.

Such metaphorical takes remain among the most significant contributions of a growing cadre of black playwrights, a group including Suzan-Lori Parks (whose White Noiseis in the same building), Branden Jacobs-Jenkins, Robert O’Hara, Jeremy O. Harris, and too many others to name. Joining them is the stingingly talented Jordan E. Cooper, whose Ain’t No Mo’ is rocking LuEsther Hall at the Public Theater.Amen to that!

Take note, however: whatever values this play may have couldn’t be better expressed than by the remarkably versatile ensemble performing it. The day I attended, Cooper, who plays a drag queen-like flight attendant named Peaches, was absent; his understudy, Hermon Whaley, Jr., however, was sensational. Cooper, surely, is just as good but Whaley is simply impeccable at remaining sincere while carrying all this role’s stereotypical tropes.

Ain’t No Mo’, which Cooper says was influenced by an earlier racially provocative satire, George C. Wolfe’s 1986 The Colored Museum (which also featured a flight attendant), gets its title from all the things Barack Obama’s 2008 election was supposed to make disappear. The audience—treated like the hearty call-and-response congregants in a black church—hear what they’re told “ain’t no mo’’ in a rousing litany delivered by the fiery Pastor Freeman (Marchánt Davis). who eulogizes over the gold casket of the late “Brother Righttocomplain. “Ain’t no mo’ waiting for FEMA,” he intones, “while the Louisiana sun is stabbing at yo back on the interstate and your grandmama is backstroking in a river of expired bodies.”

What ensues, replete with all the fixings of black dialect, profanity, and countless iterations of “bitch” and the “n-word” (mainly—but not exclusively—ending in “ga”), is a wild, often broadly farcical, yet always deeply serious work. Its comically nightmarish scenes reveal the vanished promise of “ain’t no mo” and the fury, frustration, and fear that being black in America fuels in so many dreams.

At its heart are lengthy monologues spoken by Peaches, the flamboyant, pink-wigged, sequin-dressed, spike heels-wearing flight attendant, anxiously overseeing the boarding process for Flight 1619 (named for the year the first slave ship arrived in Virginia), with Capt. Obama in the cockpit.

It’s the last African American Airlines flight to Africa of America’s blacks, whose passage to their ancestral countries, with a first stop in Dakar, Senegal, is being paid for as reparations by the government. (Latinos are on the wait list in case a seat becomes vacant.) Nearby is “Miss Bag,” a handbag serving as the repository for “our entire story as a people in this country as we make this glorious transition.”

A cartoonish approach pervades nearly everything, although a darker feeling covers two scenes, one at a clinic, where millions of black women, wishing not to bring their children into this dangerous society, are lined up to have abortions. Meanwhile, the bullet-riddled ghost of a prospective father (Marchánt) tries to dissuade the woman carrying his child from having the procedure. There’s also a pathos-laden prison episode toward the end where female convicts are being released for the flight.

But sardonic hilarity keeps returning, like the scene showing a TV reality show called “Real Baby Mamas of the South-Side,” whose participants include Rachel (Simone Recasner), a white woman “transitioning” to blackness under the name “Rachonda.” The situation leads to Jerry Springer-like mayhem with her disapproving fellow guests (Ebony Marshall-Oliver, Fedna Jacquet, and Crystal Lucas-Perry), as the producer’s offstage voice reveals his pleasure at the results.

And then there’s the scene set around the dinner table of a distinguished family who behave like whites only to be reminded of their repressed racial past by the shocking appearance of Black (Crystal Lucas-Perry). This indescribably shabby presence bursts forth to freedom from her secretly shackled basement existence; her fate is anything but free.

Ain’t No Mo’ is packed with vibrantly painted ideas and images torn from the headlines and particularly familiar to the black community, members of which were especially responsive at the performance I attended. It gets a smashing production at the hands of director Stevie Walker-Webb, with glowing assistance from Kimie Nishikawa’s outstanding settings (including a huge airliner); Adam Honoré’s colorful lighting; Montana Levi-Blanco’s expressive costumes; Cookie Jordan’s over-the-top hair, wig, and makeup contributions; Emily Auciello’s amazing sound design; and Thomas Schall’s terrific fight direction.

Walker-Webb has inspired his cast to so sharply differentiate their multiple characters as to make the actors sometimes unrecognizable. When awards for the best ensemble are being considered, Ain’t No Mo’ should be high on the list. I look forward to seeing the next Jordan E. Cooper project and to seeing much mo’ of this extraordinary company.