Sadly, today, only those of a certain age know about Agnes
de Mille’s trailblazing influence on choreography and musical staging re:
Broadway musicals. It’s not only unequivocally massive, but also unequivocally
brilliant and innovative – and still felt. She impacted numerous young
choreographers, some who danced in her acclaimed classical companies, who passed the torch. 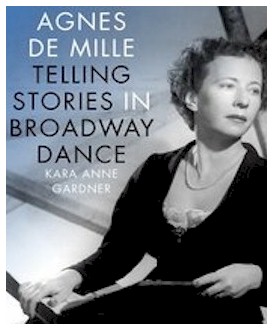 Ms. de Mille [1905-1993] had a jawdropping body of work
from the 40s into the late 60s: Rodgers and Hammerstein’s ground-breaking Oklahoma!, where her dance story-telling changed the way musicals would be conceived; Kurt Weill and Ogden Nash’s One Touch of Venus; Harold Arlen and Yip Harburg’s Bloomer Girl with her brilliant, show-stopping “Civil War
Ballet”; her ravishing ballet for R&H’s Carousel; her lilting choreography for Lerner and Loewe’s Brigadoon; and R&H’s Allegro.

She worked side-by-side directors, respectively: Rouben Mamoulian [also a
veteran film director; who met Ms. de Mille, while teaching at University of
Rochester’s School of Music], Elia Kazan, Harburg and William Schoor, Mamoulian
again, Robert Lewis, and herself as “stager” with Arminia Marshall, a
co-producer with husband Lawrence Langer of the Theatre  Guild, as assistant director.

Gardner, associate dean of faculty at the Minerva Schools
of California’s Keck Graduate Institute and who’s written extensively on dance
and music, explores these musicals in depth.

There were other successful and short-lived shows, some you might be surprised
to find Ms. de Mille attached to: Jule Styne and Leo Robin’s Gentlemen Prefer Blondes; Cole Porter’s Out of
This World; Lerner and Loewe’s Paint
Your Wagon; The Girl in Pink Tights,
where Robin set his lyrics to music by Romberg; Goldilocks, music by Leroy Anderson and lyrics by Joan Ford and
Walter and Mary Kerr; Marc Blitzstein’s Juno;
Richard Adler’s controversial-for-its-time [interracial romance] Kwamina; Tom Jones and Harvey Schmidt’s 110 in the Shade; and David Baker and Will
Holtz’s Come Summer, her last
Broadway outing.

Keeping in mind that the Tonys weren’t awarded until
1947, Ms. de Mille only received one for Brigadoon
[that year], with nominations for Goldilocks
and Kwamina. In 1986, Drama Desk
honored her “enduring legacy of cherished choreography.”

Character development remained at the heart of Ms. de Mille’s theatrical work.
One of her innovations was taking minor characters with minimal or no dialogue
and fleshing out their background stories with dance.

Not unexpectedly, especially in the 40s when she was
working in the male-dominated world of directors, what inspired Ms. de Mille’s anything-but-one-two-three
choreography was at odds with her collaborators. She also saw choreography as a
core element of musicals and felt she should be given the same rights and
billing as the librettist and composer. And she didn’t mind stirring the pot to
receive her due. Billing, she got; but Lerner and Loewe were the only team who
cut her in on Brigadoon royalties.

Those In the Know on What Makes Broadway Great 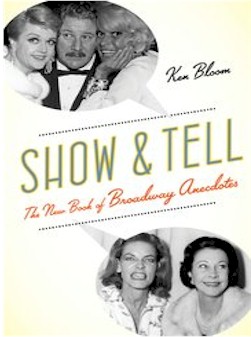 Writer, director, producer Ken Bloom’s been around and
really knows the territory (Broadway
Musicals: The 101 Greatest Shows of All Time and Broadway: An Encyclopedia; his contributions at www.indiesongs.com). He fills his books with the stuff
theater fans love and digs deep to get it right – and does it with humor and a
few well-targeted zings – especially when writing about the most beloved shows
and stars.

Here, in 25 delightful and one with a great deal of
heartache chapters, Bloom, in addition to shedding light “on the heartwarming,
spectacular, and bittersweet moment in the life of a show from conception to
opening night,” delves into the inner workings of Broadway and the culture
surrounding its hits and flops. He covers front of house to backstage.

Bloom takes behind-the-curtain to previews and allows
the reader “to experience the thrill and sometimes despair, of opening nights.”
And more than a few closing ones.

With the exception of Personalities, which opens the book with biographical
profiles, Writing the Show, Producing the Show, Rehearsals, Out of Town,
Opening Night, and Performing the Show, chapters are much too short.  The great-fun Quotes chapter could go on days,
but doesn’t.

Through a vast resource of books and interviews and
oral histories, Bloom offers a most unconventional history of theater in all
its idiosyncratic glory.

There’s plenty of amusing and revealing tidbits about
beloved shows (Guys and Dolls, Gypsy, My
Fair Lady, West Side Story) and some long–forgotten ones – such as 1866’s
four-act romantic musical spectacular The
Black Crook – considered the first musical [with a cast of 60 set in the
Harz Mountains of 1600 Germany], right up to the jukebox era and Beautiful: The Carole King Musical.

There’s lascivious gossip about Mitch Leigh (Man of La Mancha) as the “cheap”
producer of a Mame revival for
Broadway starring Mame herself, Lansbury, whom for reasons unknown he immensely
disliked – even referring to her with a word rarely heard [when no doubt his
problem was with her husband Peter Shaw, the star’s ax man].

The brilliant but not-so-loved [and that’s being kind]
Jerome Robbins naturally doesn’t escape unscathed. Bloom lets the cat out of
the bag re: the fact that Robbins didn’t choreograph West Side Story’s showstopping “America” or “Dance at the Gym.”

Beloved dancer Peter Gennaro (Kiss Me Kate, Guys and Dolls, The Pajama Game, Bells Are Ringing)
was segueing into choreography as Robbins assistant. He created those numbers,
but Robbins refused to credit him – even when accepting his Tony for
choreography – proving, as someone put it: “he was a bastard to the very end.”

Gennaro went on to a career that spanned from 1959 to 1997 and such hits as Annie, Fiorello!, and The Unsinkable Molly Brown – not to
mention countless TV variety shows.

Though subtitled:  The New Book of Broadway Anecdotes, it’s the old cut-and-paste ones that have
been written/spoken about time and again that are most fun to revisit. That
said, better organization might benefit readers. Anecdotes by, say, Comden,
Anita Gillette, Fosse, Penny Fuller, Herman,
Loesser, and Merman are scattered throughout. So, thank-you-very-much
for the index.

Bloom provides a wonderful resource for theater buffs
with the epilogue, Further Reading. The biggest let-down – one hard to believe
knowing Bloom’s connections and collections, is that save for the B&W
cameos on the jacket, there’re no photos.