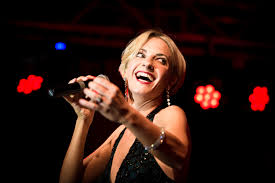 Produced by Carol Ostrow and Robert R. Blume, Haan will deliver an encore performance of the program which was praised as “a moving performance…..Haan established a close rapport with the audience through her informative, funny, and often moving commentary between sets.” The unforgettable evening will feature a musical voyage from 1920s Berlin to recent Broadway while singing klezmer / Hebrew music, French chansons by Jacques Brel and Edith Piaf, American Songbook favorites, and beloved Broadway showtunes in five different languages with Richard Danley on piano and Mike Campenni on drums.

Hailed as “An all-around entertainer of the highest calibre,” award-winning Adrienne Haan is one of Europe’s and America’s most electrifying concert and cabaret stars. With a diverse repertoire that ranges from chanson to jazz, to blues, klezmer, and Broadway, Haan has a special passion for the music of the 1920s and 30s. This fall Haan made her Carnegie Hall debut to a sold out audience in a special program titled Tehorah, celebrating the 50th anniversary of German-Israeli diplomatic relations.  Recent highlights include the debut of her new show, Rock le Cabaret!, a rock interpretation of French chansons by Brel, Piaf and Aznavour at the Cutting Room, and appearances at the Neue Galerie’s Café Sabarsky and the Santa Fe Jewish Film Festival. Her latest CD Berlin, Mon Amour, hailed as “engaging and unique,“ is a tribute to 1920s and 30s Germany.  Earlier recordings include I Could Have Danced All Night, and Born to Entertain.  www.adriennehaan.com.