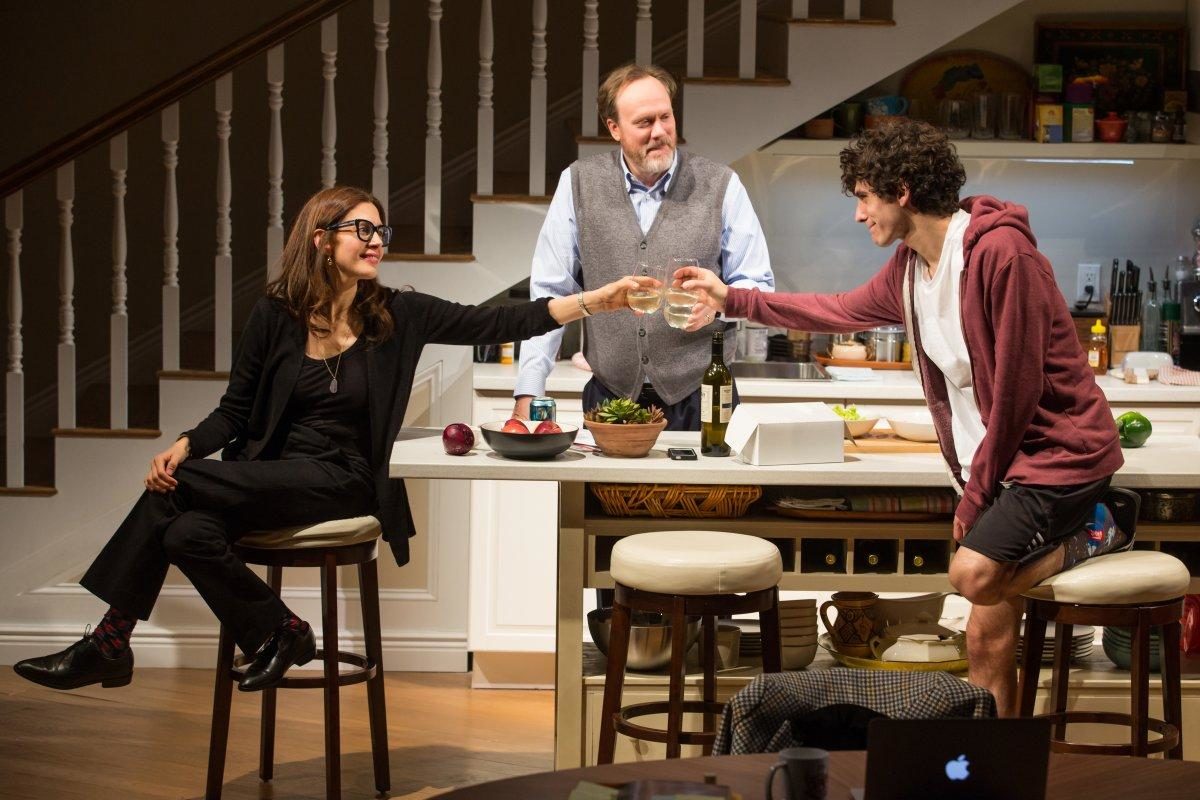 The issue at hand is diversity in education. And its greatest advocate is Hillcrest’s Admissions Director, Sherri-Rosen Mason – an emotive, albeit understated Jessica Hecht. Even her hyphenated name bespeaks her obsession about the blending of peoples. In this case, it’s the Jewish Rosen, and the Christian, Mason.

Meanwhile, Sherri’s husband, Bill, is a self-confident, self-effacing liberal, and the dean of the school where she presides. In other words, he’s a nice guy.

As the play opens, Sherri is facing off with her associate, Roberta (Ann McDonough) about her failure to produce an admissions catalogue that expresses the school’s mission, to diversify the student body. Completing this project takes up the entire course of the play…and only then, because Sherri becomes disillusioned by her ridged political correctness.

But the conflict that raises the stakes in this simple, direct story takes place when their son Charlie (an excellent Ben Edelman) isn’t accepted for early admission to Yale, while his best friend, the bi-racial son of his mother’s best friend, Ginnie, is. Beyond his jealousy and righteous anger, Charlie, finally fights back, in an act of rebellion that makes him a most appealing misfit.

In this role, Ben Edelman, brings terrific commitment and spark. His tirade at rejection, his perception of unfairness, his “Republican” attitude toward affirmative action, square off in the play’s central scene. And it’s all Ben, spewing his contempt at a system that is skewed to renounce him – a white male.

While Ben’s outburst comes across as narcissistic, and self-obsessed, it also seems like the perfect opportunity for his parents to demonstrate their righteous ideals. “So you’ll go to Dartmouth. You’ll go to Duke.” Bill retorts, as he shames his son for his display of racism.

For Ben, however, the conflict is transformative. And while his parents strive to keep him on track with their ideals and expectations, he takes his own rousing stand for social consciousness.  In fact, he doesn’t need to win his fight. In delivering a deadly blow to his parents’ idea of social consciousness, their hypocrisy is exposed and vilified.

In keeping with the style of the play, Daniel Aukin’s direction is flawlessly realistic, with a keen eye to the economy and simplicity of Harmon’s story telling. Reccardo Hernandez’s set, an open family room framed by a kitchen at the back wall is comfortable, albeit fashionably conformist.

So, credible is the acting that even the characters’ excesses, flowing out of their daily behaviors, hardly surprise us. As Ginnie, the white mother of a black son, Sally Murphy looks like Mia Farrow in her wan, and charismatic presence. Ann McDonough as an old fashioned but sensitive administrator comes across with vulnerability, and Andrew Garman as the dean and Charlie’s dad is a happy and righteous liberal.

An engaging evening of theater without fanfare, Admissions has a built-in audience right here in New York City.