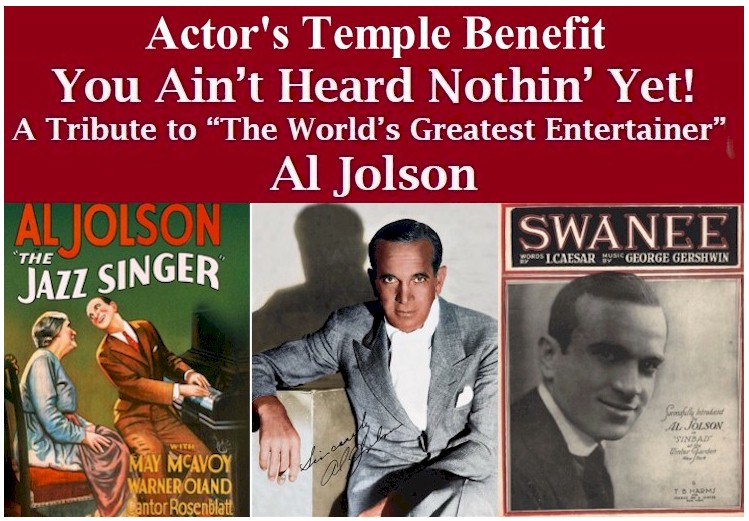 Al Jolson, who not only attended services at the Temple, but also was a benefactor and fundraiser. “We know Jolie is in Heaven on a runway of clouds still singing his heart out,” says Ms. Ostrow. “It’s time we said thank you for all he did to keep our Temple thriving. Now, we must bring it into the 21st Century.”

Following cocktails and dinner, Tony Babino “will bring to life the man of the hour.” There will also be entertainment from comic George Bettinger, singer Eleanor Reissa, and Klezmer music from Sir Frank London and Friends. Ms. Finkelstein and Ms. Ostrow describe the Actors’ Temple/Congregation Ezrath Israel, as “a place where spirituality meets creativity, where acceptance and inclusion are core principles, and where the enduring values of Judaism translate into human connections and where we provide deeds of loving kindness and caring.”

Members of the benefit committee, in addition to Ms. Finkelstein and Ms. Ostrow, are Paula Novick, Daniel Miller, and Larry Roberts. Members of the renovation committee include Rabbi Jill Hausman and Andrew Alkon.

Individual, tax-deductible tickets are $350 for “treasured friends,” $375 for “supporters,” and $500 for VIP “producer” tickets. To purchase, visit  www.theactorstemple.org/online-store. Al Jolson was the ultimate belter and the megastar of his era. He played the Winter Garden, with a long runway extended into the auditorium. He said he wanted to be intimate with his fans.

Singing spirituals, jazz, blues, and ragtime, his performing style was brash, extroverted, and shamelessly sentimental, melodramatic approach. Audiences couldn’t get enough as ran up and down the runway, and across the stage, teasing, cajoling, and thrilling them. His popularity was that of Elvis’ and the Beatles at their peak. At a time when political correctness wasn’t the order of the day, he performed in black face. Between 1911 and 1928, he shattered Winter Garden box office records with nine sell-out shows. He became our most famous and highest-paid entertainer.

According to one of his later record producers, the legendary Milt Gabler of MCA/Decca Records, he was “a gigantic, high-energy talent, but also demanding and beyond arrogant. Nevertheless, the public idolized him.”

His name was a household word. Besides dominating the air waves, Jolson has a place in motion picture history: He starred as a cantor’s son who just wanted to sing in the first talking picture, The Jazz Singer (1927).  Jolson went on to headline a number of 30s film musicals tailored especially for him; and was the producer of several.

He sold millions of records and sheet music. Among Jolson’s astonishing 80 hits were classics, such as “The Anniversary Song,” “April Showers,” “Let Me Sing and I’m Happy,” “My Buddy,” “My Mammy,” “Rock-a-Bye Your Baby with a Dixie Melody,” “Sonny Boy,” “Swanee,” and “When the Red, Red Robin (Comes Bob, Bob, Bobbin’ Along).  He not only influenced such stars of the day as Bing Crosby, but his recordings continued to influence pop stars long after his death. He toured nationally and internationally.

After Japanese sneak attack on Pearl Harbor, Jolson became the first star to entertain troops overseas during WWII. He headlined 13 Broadway musicals, in addition to his Winter Garden solo shows. There was a Hollywoodized bio film in 1946, The Jolson Story, which was strong on tunes but omitted the drama of his troubled marriages.

In 1950, after a long bout with malaria, he soared into Asia, entertaining troops during the Korean War – performing 42 shows in just over two weeks. He returned to New York, totally exhausted. Three weeks later, he died of a heart attack. He was only 64. It was the first time Broadway theatres dimmed their lights. His funeral matched that of silent screen idol Valentino, with a turnout of an estimated 20,000 in spite of pouring rain. To salute his service to the troops, Defense Secretary George Marshall posthumously awarded Jolson the ultimate accolade of a grateful nation: the Medal of Merit. Jolson has three stars on the Hollywood Walk of Fame.

Ms. Ostrow, a former entertainer herself who’s a producer and filmmaker, has a  theater group sales office. She points out that the Temple is available for rental (rehearsal space, Off Broadway shows, special events). For more information and more on the history of the Temple, visit www.theactorstemple.org.