Tony and Drama Desk winner and inductee into the Theater Hall of Fame Len Cariou knows a few things about making entrances and exits. To assist the Actors Fund’s Lillian Booth Home for Actors in Englewood, NJ, with its annual tradition of remembering Edwin Forrest Day and Shakespeare’s birthday, Cariou performed excerpts for his February Off Broadway revue Broadway and the Bard, which he notes “ combined my two great loves — Shakespeare and American musical comedy.”

The show, which melded Bard soliloquies and sonnets with memorable song, was directed by Barry Kleinbort with musical direction by Mark Janas.

With The Actors Fund undergoing a massive expansion and renovations, the annual celebration was held at the historic Players Club in Gramercy Park.  It was an apt venue since it has many degrees of separation to legendary actors Forrest and Edwin Booth, and the Bard.

Cariou, whose Shakespearean bona fides include many seasons at the Guthrie and Connecticut’s Stratford Shakespeare Festival, made his Broadway debut in 1968 in two acts of the three-act The House of Atreus, based on Aeschylus’ The Oresteia, as Orestes. A year later he was back on the boards in the title role of Henry V. Six months later he was co-starring with Lauren Bacall in Applause, for which he was Tony-nominated. Opposite Angela Lansbury in Sondheim’s Sweeney Todd, he took home  Tony and DD Awards. 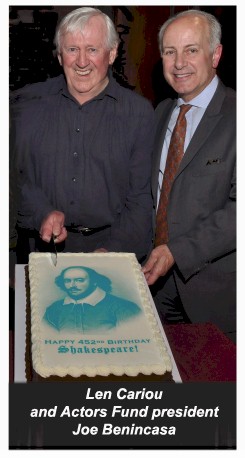 For the Actors Fund event, he opened with Orsino’s soliloquy from Twelfth Night, “If music be the food of love, play on,” following with “Love, I Hear,” from Sondheim’s A Funny Thing Happened on the Way to the Forum, and Rodgers and Hart’s “Falling in Love with Love” from The Boys from Syracuse.  He concluded with the king’s speech from Richard II, “For God’s sake, let us sit upon the ground /And tell sad stories of the deaths of kings,” which segued into “If I Ruled the World,” from Cyril Ornadel and Leslie Bricusse’s Pickwick.

The Actors Home, situated on six beautifully-landscaped acres, is funded by donations to the Actors Fund, the national human servicesorganization that helps professionals in performingarts and entertainment in times of need, crisis, or transition. This year’s celebration was especially auspicious as AF president and CEO Joe Benincasa updated the capital program for the $22-million expansion, which was jump-started by a $2-million gift from the Shubert Organization, which also provided funding for the Home entrance lobby.

Invited guests for the reception and luncheon were members of the Edwin Forrest Society, who’ve made estate gifts and annuities to the Actors Fund. Absent this years was AF board chair, Tony and DD-winner Brian Stokes Mitchell, now on Broadway, co-starring in Shuffle Along…

Among special guests at the Actor’s Home Edwin Forrest Day was longtime AF supporter Joyce Randolph, a spry 91 and well-remembered for her role as Trixie on the classic TV sit-com The Honeymooners, who said, “I consider myself lucky to still be well enough to be on my own, but I consider the Actors Home my second home.” Other show biz notables present were Tony and DD nominee Beth Fowler (Sweeney Todd, The Boy from Oz, and Beauty and the Beast; SAG Ensemble winner for TV’s Orange Is the New Black) and DD winner and Tony nominee Lois Smith. 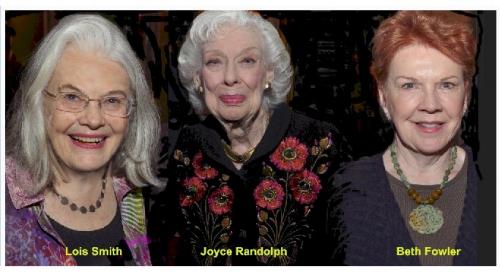 Everyone present continued to honor a stipulation of the behest of 19th Century Shakespearean actor Forrest, who left the bulk of his estate to fund a retirement home for thespians in Philadelphia in 1872: sing “Happy Birthday” to Shakespeare.

The first AF Actors Home opened on Staten Island in 1902 and was eventually relocated to Englewood on property donated by heiress Henrietta “Hetty” Howland Green, an astute Gilded Age businesswoman who parlayed the inheritance left by her banker husband into an astonishing fortune to become known as “the richest woman in America.”

In 1975, the Home merged with L.I.’s Percy Williams Home. The Assisted Living Care Facility is named in Mr. Williams’ honor. In 1980, the Philadelphia home merged with the AF’s Englewood Home, which has continued to grow and expand services. Miss Booth, a philanthropist, donated $2-million to have the Home named in her honor. In 1993, a nursing home wing was named for Broadway, film, and TV star Natalie Schafer [think Lovely Howell on Gilligan’s Island], who bequeathed in excess of $1.5 million. Additional donations, such as that of actress Frances Gaar, a former AF trustee, executive secretary of AGVA, and champion swimmer, resulted in the complex’s Star Walk and Garden of Aquatic Delights.

To make an estate gift or make a tax deductible contribution to the Home Campaign for the expansion of the Lillian Booth Actors Home, remit to The Actors Fund, Attention: Jay Haddad, 729 Seventh Avenue, 10th floor, New York, NY 10019.