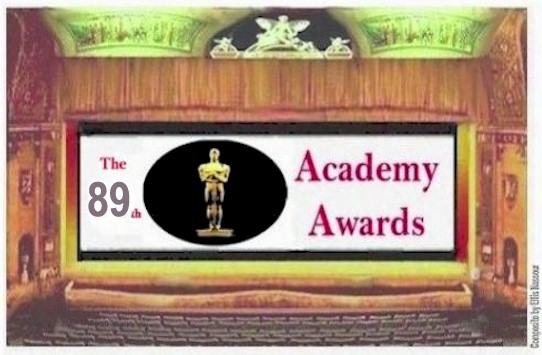 The Oscars will air on ABC, beginning at 8:30 P.M. and run on to or past three-and-a half hours. Prior to the Awards, there’ll be lots of glitz and glamour with the red carpet arrivals.

Compared to last year and its lack of diversity, this year it’s the difference of day v. night – with an overload of all sorts of diversity. To avoid another brouhaha, the Academy, led by president Cheryl Boone Isaacs, initiated numerous changes in the make-up of the committees and membership [increasing the youth or younger factor].

2016 was also a big year for indies – several of which made it into the Top Nine.

The Academy will welcome the nominees in 24 categories and presenters with these words: No matter who you are or where you live, movies bring us together. Through indelible, fearless performances you extraordinary actors help make it happen. And the world listens. [Bring to the screen your tired, your poor, your huddled masses and let it infuse them with buttered popcorn, Sno-caps, and iced-cold Coke.]

There’s a new prez and not all of Hollywoodland is pleased with DJT, so expect loud protests and anti-testimonials. Several stars have announced they won’t attend; however, by attending, they could make an impact and be heard worldwide.

The Oscars, live and on tape, are seen by an estimated 35 million worldwide. At press time, President Trump and Pope Francis hadn’t been added to the presenter’s list or weighed in on the nominations – some of which must displease both.

The fate of Best Picture is in the hands of the Hollywood caucus. Leading the pack in nominations are La La Land (Lionsgate) received a record-tying 14   (1950’s All About Eve) and 1997’s Titanic also achieved this distinction).  Arrival and Moonlight (A24/Plan B) came in second with eight.

Actress in a leading role will be the category where the winner could be anybody’s guess. Of course, there’s been so much hype about Emma Stone in La La Land, but Isabelle Huppert turned in a memorable performance in Elle (Sony Pictures Classics), and the incredible Natalie Portman turned herself inside out to create a harrowing impersonation of Jackie (Fox Searchlight), our former first lady. Three-time Oscar winner Meryl Streep continued to break records with her 20th nomination (Best Actress, Supporting Actress) for Florence Foster Jenkins.

Over in the men’s category, Casey Affleck outshined older brother, rising to star status at the top of the pack with his extraordinary performance in Kenneth Lonergan’s Manchester by the Sea (Amazon Studios). Often it’s puzzling how nominators nominate. For instance, when she is billed as a co-star in bold lettering and carries at least, if not more, of the screen adaptation of August Wilson’s Tony and Drama Desk-winning Fences, starring the leads of the 2010 Broadway revival, Tony-nominated Denzel Washington and Viola Divas, how does two-time nominee (Doubt, The Help) Davis get regulated to the Supporting Actress category? And wasn’t Jeff Bridges an equal star with Ben Foster and Chris Pine in Hell and High Water?

Artists will be Waitress composer [and soon-to-be-star of the musical] Sara Bareilles, performing the In Memoriam tribute. Auli’l Cravalho and Lin-Manuel Miranda will sing the nominated “How Far I’ll Go” from Animated nominee Moana, Rock’s John Legend, who was featured in nominated La La Land will perform “City of Stars” and “Audition (The Fools Who Dream),” Sting sings “The Empty Chair” from Jim: The James Foley Story (HBO); and Justin Timberlake will perform “Can’t Stop the Feeling” from Trolls (Dreamworks Animation).

The Academy’s Board of Governors voted Honorary Awards, given “to honor extraordinary distinction in lifetime achievement, exceptional contributions to the state of motion picture arts and sciences, or for outstanding service to the Academy.”

Oscar certainly hasn’t always been perfect, so you might anticipate an upset. Citizen Kane, now considered one of the greatest movies of all time, didn’t catch on with audiences of its day, but it got a Best Picture nod – only to be outgunned by the Welsh mining drama How Green Was My Valley Best Picture. Star Orson Welles co-wrote the screenplay with the great Herman J. Mankiewicz, but through some maneuver Welles got sold credit and, on winning, didn’t even have the largesse to mention, much less credit Mankiewicz [which may have marked the beginning of his slow downfall].

Could there be a tie as in 1969, when two Best Actress winners were announced: Katharine Hepburn/The Lion in Winter and Barbra Streisand/ Funny Girl. With Hepburn absent, Streisand had the stage all to herself for her famous quip, “Hello, Gorgeous!”

Could there have been a more celebrated film and director in 1973 than Francis Ford Coppola and The Godfather, which captured Best Picture. However, it was Broadway’s Bob Fosse who grabbed the director gold for the screen adaptation of Best Picture nominee Cabaret.

The Academy Award, nicknamed “Oscar,” was first presented in 1929. Tickets were $5, 15 statuettes were awarded in a dinner ceremony that ran 15 minutes. The annual Awards were broadcast on radio in 1930; and first televised in 1953. Bob Hope became the host dejour.  The Oscars are now seen live in more than 200 countries and can be streamed online.

Open those darn envelopes, please. Got your ballot?  Vote. Let the winner be your winner! Nomination highlights: Documentary (feature)
13th, Fire at Sea, I Am Not Your Negro, Life Animated, O.J.: Made in America

Animated feature film
Kubo and the Two Strings; Moana; My Life as a Cougarette; The Red Turtle; Zootopia

For heightened drama watch those scary moments when winners exit the stage all pumped with adrenalin and are ambushed by Kelly Ripa sticking a mike in their face. “How does it free to win?” Reply, “Gee, I don’t know, pretty good, I think; but I do feel sorry for the losers – I mean, the ones who didn’t win.”

At www.oscars.org, check out the full list of nominees and play against your friends in the Official Oscars Challenge; and participate in Oscars Backstage 2017, a second screen experience where you choose from four channels pulling from more than 20 cameras on the red carpet and backstage at the Dolby.

The 2016 Academy Awards are produced by Michael De Luca and Jennifer Todd and directed by Glenn Weiss. Tony nominee and DD-winning orchestrator Harold Wheeler (music director, Dancing with the Stars) will do orchestrations and music direct.