February 1, 2022: ACA Galleries, 529 West 20th Street, in the Gallery District announced a two–person exhibition featuring artworks by Larry Rivers and Grace Hartigan. The exhibition, The Poetry of Painting, has been extended at ACA Galleries through March 5, 2022. Widely regarded as two of the most important members of the New York School, the friendship and artistic parallels between Grace Hartigan and Larry Rivers are often overlooked. 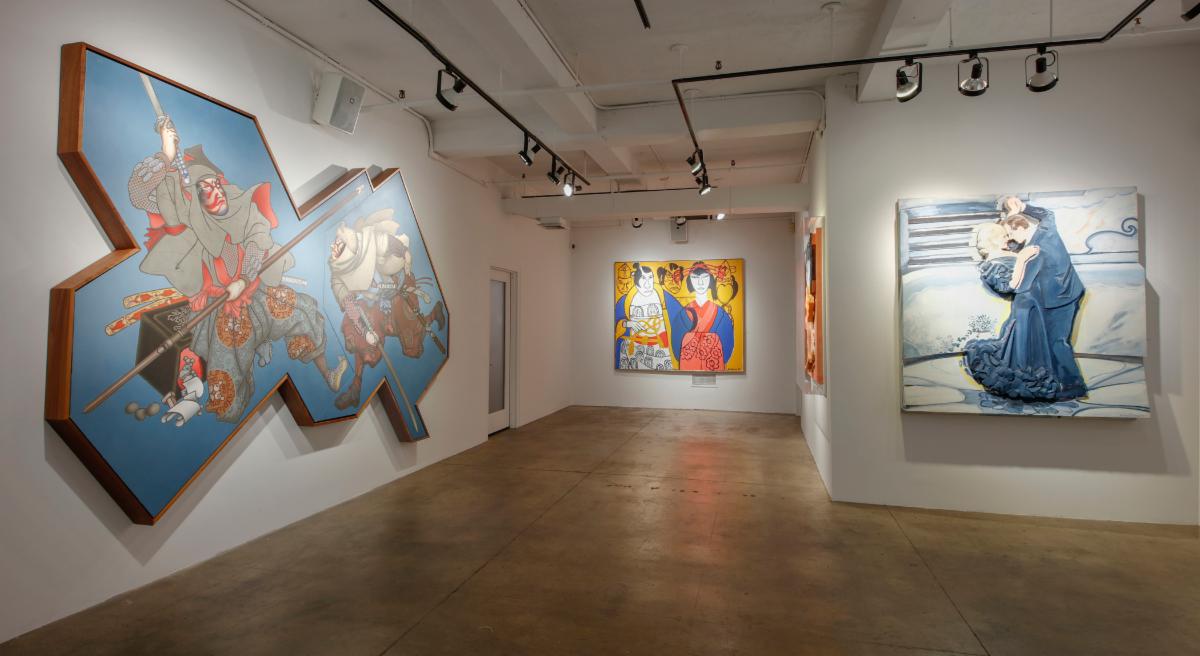 February 1, 2022: ACA Galleries, 529 West 20th Street, in the Gallery District announced a two–person exhibition featuring artworks by Larry Rivers and Grace Hartigan. The exhibition, The Poetry of Painting, has been extended at ACA Galleries through March 5, 2022. Widely regarded as two of the most important members of the New York School, the friendship and artistic parallels between Grace Hartigan and Larry Rivers are often overlooked.

At the moment when Abstract Expressionism was at its zenith, both artists chose to incorporate representation into their tableaux, anticipating and influencing what was soon to become Pop Art. Hartigan and Rivers were pivotal not only in re-introducing figuration but in their choice of subject matter -which ranged from mundane household and studio objects to imagery lifted from popular culture- is equally as important. The overlap between them extended far beyond the studio into shared galleries and social circles which not only included artists but the most influential poets of their generation including Frank O’Hara, John Ashbery, Kenneth Koch and Barbara Guest. The Poetry of Painting, largely focused on late works, investigates the mature artistic output of two fiercely independent artists who continually developed singular styles over five decades. The dynamic juxtapositions of their paintings, assemblages, collages and works on paper demonstrate their divergent techniques to represent similar subjects to powerful effect.

Grace Hartigan spent her childhood in New Jersey and at twenty-three moved to New York’s Lower East Side. There, she was exposed to the central figures of Abstract Expressionism and began a rich career despite the challenges sexism presented. From the beginning her paintings uniquely fused representational elements to the principles of Ab-Ex and thus prefigured Pop Art. Grace Hartigan’s work was included in MoMA’s 1956 exhibition Twelve Americans and in 1958 in the seminal New American Painting exhibition which toured Europe through 1959. Hartigan went on to teach at the Maryland Institute College of Art, and in 1965 became its director. In 1993, she was included in the Whitney Museum’s Hand Painted Pop exhibition, a testament to the durability of her vision and place in the contemporary American canon. Her work continues to be exhibited in museums and galleries in America and around the world and is held in major collections including the Museum of Modern Art, The Metropolitan Museum of Art, the Whitney Museum of American Art, Boston’s Museum of Fine Art, the Art Institute of Chicago, the Pompidou Centre in Paris, and many others.

Larry Rivers was born and raised in New York. He began painting in 1945 after a brief career as a jazz saxophonist and studied at the Hans Hoffman school from 1947-48. In the early 60’s, Rivers lived in the famous Hotel Chelsea where he mingled with many other important artists, musicians, and poets. Known by many as the grandfather of pop art, Rivers explored everyday objects and American popular culture in his non-objective non-narrative paintings. In 1955 Rivers’ work gained traction after he was one of eleven New York artists included in the opening exhibition of Terrain Gallery. In 1965 he had his first retrospective, which traveled to five major American museums. The last work he contributed to the exhibition, The History of the Russian Revolution, is on permanent display at the Hirshhorn Museum and Sculpture Garden at the National Gallery in Washington, DC. His work is included in the collections of the Guggenheim Museum, The Metropolitan Museum of Art, the Museum of Modern Art, the Whitney Museum of American Art, the Art Institute of Chicago, and the Tate Gallery amongst many other prominent institutions.

Since 1932 the American Contemporary Art Gallery (ACA) has been at the vanguard of American Art. As one of the oldest American art galleries in the United States, ACA’s pioneering interest in progressive American art was established early on with exhibitions and publications, often introducing the work of Giorgio Cavallon, Aaron Douglas, Philip Evergood, Rockwell Kent, Alice Neel, Barnett Newman, Irene Rice Pereira, David Smith Theodoros Stamos and Charles White. Over the years ACA has presented over 850 exhibitions worldwide and published over 400 books & catalogues. In 1935, ACA hosted the inaugural meetings of the American Artists Congress (AAC), the influential precursor of the WPA federal programs that aided artists and funded public art projects during the depression. Today ACA Galleries continues to honor this tradition by exhibiting and representing Contemporary & Modern artists whose talent transcends their nationality, race or gender.