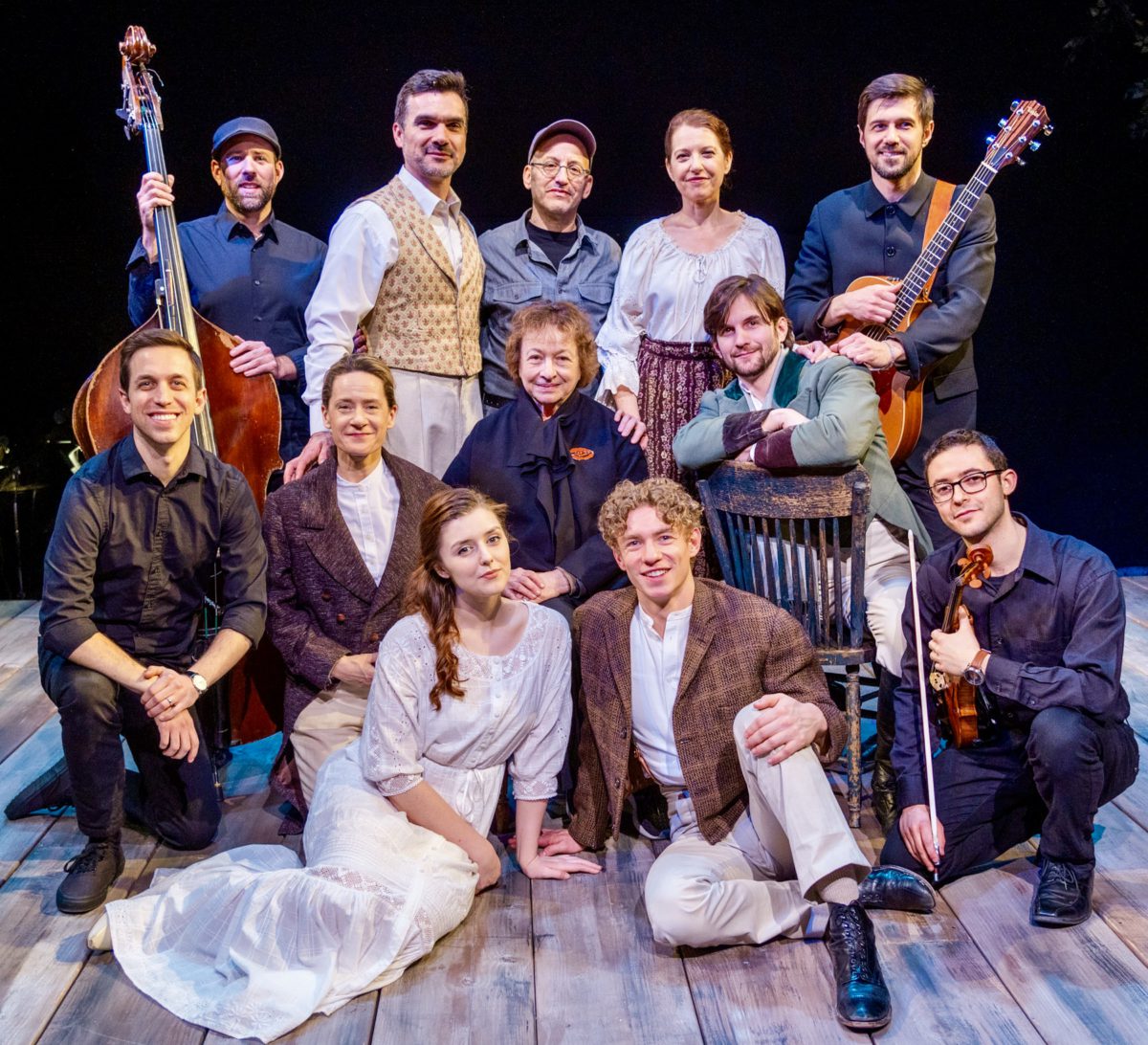 Sensing a dramatic pulse in Turgenev’s tale, Nancy Harrow (music and lyrics) and Will Pomerantz (script and direction), using the title About Love, have adapted it for Culture Project as a modest, 90-minute chamber piece they call “a play with songs and music.” Now on view at the Sheen Center for Thought and Culture, their work fails to find that pulse, resulting in a story theatre-style presentation blanketed in a gently woven blend of theatrical blandness.

Perhaps the story will remind you of other semiautobiographical works, set in the summertime, about a boy’s first crush, such as the 1971 movie Summer of ’42, or A.R. Gurney’s play, What I Did Last Summer, where the boy-woman relationship is platonic. Elements of this material can also be found in the boy-man affair depicted in the 2018 movie Call Me by Your Name.

The tale concerns 16-year-old Peter (Jeffrey Klinger), looking back in 1853 on what happened in the summer of 1833, which he spent with his mother (Jean Tafler) and father (Tom Patterson) in the countryside. The neighbors that fateful summer were a down-on-her-heels princess (Helen Coxe) and her beautiful, 21-year-old daughter, Zina (Silvia Bond).

Zina is an outrageous flirt, stringing four older men along like toys. There’s an aristocrat named Count Molevsky (Coxe), a doctor named Lushin (Don Domingues), a military officer named Markov (Patterson), and a poet named Maidonov (Tafler). Peter falls under her spell as well. He takes her sisterly attentions more seriously than they’re intended only to discover that the man to whom Zina has given her heart is someone much closer than he could ever have imagined. In the coda, set in 1853 St. Petersburg, Peter closes his account by noting a recent series of sad events.

While being faithful to the outlines of Turgenev’s tale, the adaptation attempts to theatricalize it by  creating a six-actor ensemble, four of them not only playing multiple roles—including women as men—but also sharing the storytelling. This is done by dividing it up with Peter, which occasionally can be confusing. Peter will be telling his story only for each of the others to step in and do so as well. It gives director Pomerantz opportunities for moving his actors about in differing patterns but is of little help in increasing dramatic interest.

Thinning such interest even more is the adaptation’s dependency on direct address, using a relative paucity of dialogue in favor of exposition, which is often delivered during the physical enactment of what it’s describing. It’s a type of self-conscious theatre making, useful perhaps in children’s theatre, but more effective at drawing attention to itself than to dramatizing material like Turgenev’s story.

Harrow’s incidental music, provided by a small, upstage orchestra of guitar (Misha Josephs), bass (Ryan Berg), drums (Steve Picataggio), and violin (Ben Sutin), offers atmospheric sweetness, and her half-dozen songs, all in melancholy modes (one is actually a blues number), have an attractive quality reminiscent of jazz-inflected 50s-style torch songs. Their lyrics, though, are about feelings, and do little to enhance, explain, or advance the plot.

On the other hand, the music is engaging enough to suggest that Harrow’s talent might have been exploited to create a full-fledged musical, with a more varied melodic and rhythmic score, and with lyrics less emotionally generic and more connected to the characters and events.

In keeping with the minimalist approach, Brian C. Staton’s set is little more than a square platform of wooden planks, the scenery just an assortment of chairs, and the props all imagined through mime (except for a few actual ones, like books and a riding crop). Allen Hahn’s lighting helps create the right moods and Whitney Locher’s costumes are a simplified assortment of 19th-century styles that allow for quick changes to designate different characters. The modern hipster’s pork pie hat worn by one character, though, is distractingly anachronistic.

About Love’s ensemble is adequate to its tasks, the songs are well sung, and the staging smoothly attractive. Instead of accelerating one’s pulse rate, however, the show only slows it down, making it impossible to fall in love with About Love.