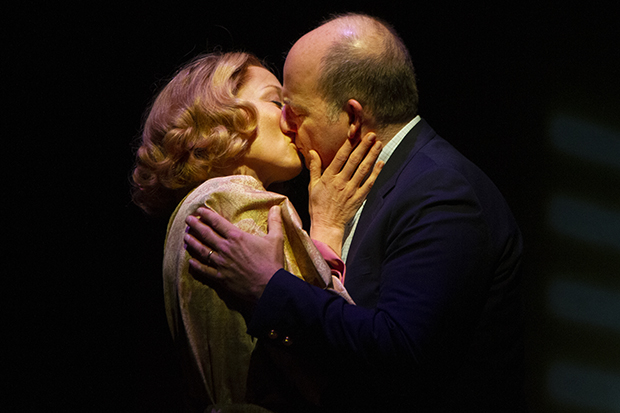 The first time I visited, I witnessed Alice gently chiding Calvin for getting his hair cut too short. She claimed this was a vestige of his youth and the need to save money. Calvin shrugged goodhumoredly. The love and deep understanding between the two was palpable.

The phrase may be considerably overused, but if any play deserves to be called “a work of love,” it would most certainly be this radiantly emotional play. Alice, a writer, educator and film producer, died in 2001 at age 63 from complications resulting from cancer treatment she had received twenty-five years earlier. After her death, Trillin received many condolence letters, often from people who only knew Alice through his humorous writing. For them, she was something of a sit-come sidekick; he decided to correct the image.

Directed by Leonard Foglia, Theater for a New Audience’s production features Jeffrey Bean as Calvin and Carrie Paff as Alice. Riccardo Hernandez’s set features a table and chairs, and most important, the closet from which Paff selects the various (sometimes dazzling) clothing with which she adorns her shapely figure.

The play follows Alice and Calvin’s relationship from their meeting in 1963 at a party thrown by Monocle, “a  doomed magazine of political satire,” through their courtship, to the birth of their daughters, Abigail and Sarah, Alice’s battle with lung cancer and finally, her death.

The Times obituary described Alice as “Educator, Author and Muse.” Trillin paints a picture of a woman  who is compassionate (she was always ready to help a friend, an acquaintance or even a stranger) and passionate (about her children, her friends, her marriage, a cause she believed in).

She is also elegant (she liked to travel; she loved beautiful clothes) and practical (people who “devote their lives to accumulating more money and goods than anyone could use” she believed “lack a sense of enoughness”).

She is frugal (“Luxuries like expensive jewelry or flashy cars didn’t interest her”) and extravagant (“Alice’s Law of Compensatory Cash Flow…holds that any money not spent on a luxury you can’t afford is the equivalent of windfall income”).

Alice is often serious but has a wicked sense of humor. She is vulnerable but brave.

Paff and and Bean create that casual familiarity unique to married couples. For this reason they are totally believable. Despite the highly emotional content of their story Bean and Paff are remarkably low-keyed. Somehow this makes the story all the more moving.

Those who look for high drama will be disappointed in this short two-hander. Conflicts arise from outside causes: sickness and death which claims us all in the end. They never come from the clash of personalities, which is the source of most drama onstage and off.

Yet About Alice seems to touch on the equally powerful and much more mysterious force in life, the nature and strength of sustained love.

And yes, I was one of those people who sent Calvin Trillin a sympathy card after his wife died.