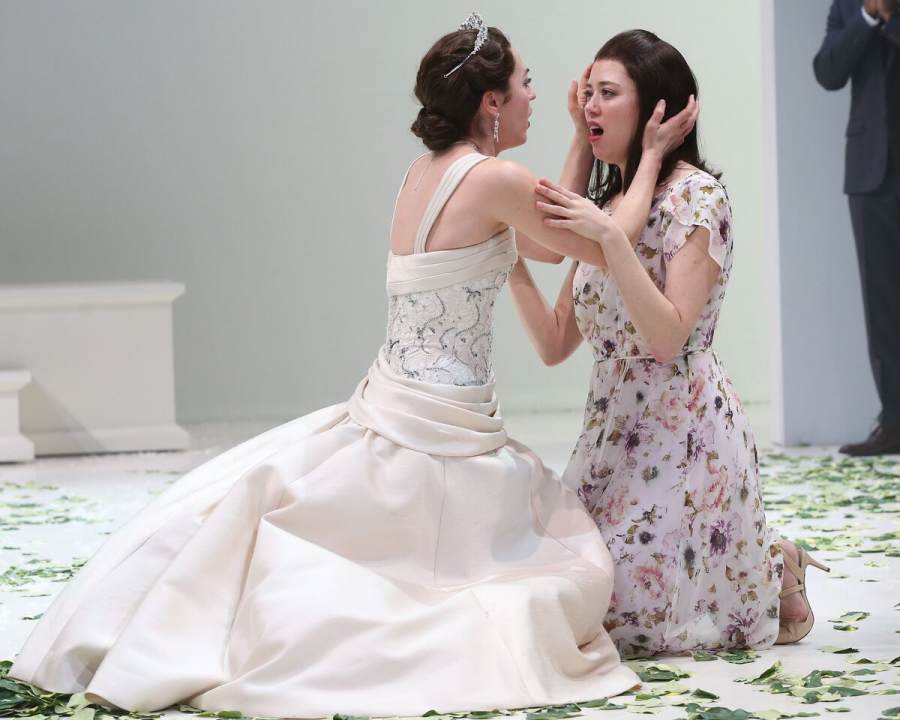 Director Arin Arbus combines the ever-wordy melancholy of Acts I through III in the first half of this almost three-hour production. Leontes (Anatol Yusef), king of Sicilia, becomes paranoid about the relationship between his queen, Hermione (Kelley Curran), and his friend, King Polixenes (Dion Mucciacito) of Bohemia. Curran’s flummoxed reaction to the inaccuracy of the charge is noticeably integral to the story, while Jack Doulin’s smart casting of an importantly height-challenged, striking Leontes, leaves room for an extra layer of pondering: Does the king deflect what he considers to be his own shortcomings onto his friend and wife?  Does his jealousy stem from his own poor self-image and worth?

The first three acts were written blandly and are difficult to withstand no matter how they are parlayed on a stage. However, a beautiful immersion of the senses including the sound of birds, a small band of organic instrumentals (from talented musicians Zsaz Rutkowski and Titus Tompkins and composer Justin Ellington), lightning and thunder, falling leaves and snow, and the entrances and exits of actors through extensions of the stark-white thrust stage (designed by Riccardo Hernandez), all amount to a genius telling of a nominal, faltering story. Paulina, Hermione’s aide, Mahira Kakkar is phenomenal in her defense of the queen, alternately stern in her affirmations and ballistic in her frenzy to have her voice heard. A mocking dance-chase between the Tale’s infamous bear (Arnie Burton) and Oberon K.A. Adjepong’s Antingonus is both comical in its symbolism and invigorating in its speed (through an audience that so desperately needs a jolt of action).The greatest pleasure before the intermission is in the introduction of more of Doulin’s brilliant cast; the Shepherd, played by John Keating (whose resemblance to Doc in Back to the Future is uncanny and perfect for his role), and Ed Malone, who plays the lanky clown to delightful levels of humor and humility.

Acts IV and V, which occur sixteen years later, belong to the incomparable Arnie Burton, whose penchant for humor and delectable ease with his slimy, sneaky Autolycus, is the first and foremost reason to take in this Winter’s Tale. Through dopey tunes and riffing with the audience (he wins the prize of being the sole character allowed to break from Elizabethan prose), he quite literally steals the show and never looks back. Audiences now contend with spending the rest of the performance with dopes, hillbillies, and pregnant lovers fighting over the same hick. Complete with a dance number featuring fun choreography from Austin McCormick, and use of the word “wither” that you will recall for the rest of your life, the production is undeniably more satisfying in its flow. Emily Rebholz’s costumes are intricate and appropriately emblematic of their worlds- stiff, dark and formal in Sicilia, comical, raunchy and at times, even contemporary, when characters traverse Bohemia.

Shakespeare hoped that his audience would suspend their disbelief with The Winter’s Tale, specifically in the “miracle” that is Hermione’s perfectly aged statue coming to life in the end. Perhaps in 2018 it is more fantastical to wonder why Leontes is forgiven for his sins, or why Camillo (Michael Rogers) is thrust at Paulina as a mate because he also happens to be single and of an older age. If audiences can take a troubled plot at face value, one that is arguably about forgiveness and repentance, and simultaneously turn to appreciate how it has been interpreted and presented, the production should be seen as masterful. The choices made by Arbus and the marvelous ensemble are stunning in their complexity and splendor, and Theatre for a New Audience’s Tale is one that deserves to be experienced.