May 15, 2022: Before us on the Irish Rep’s miniscule stage is a lifelike simulacrum of the dining room in a village inn outside Boston, circa 1828 (the year of Andrew Jackson’s election). Two coarse men are speaking with thick brogues, and whiskey keeps sliding down gullets to familiar resting places. Before long, an imposing man named Cornelius (“Con”) Melody (pronounced “Mel-OWE-dy”) appears, spewing braggadocio and saying spiteful things to his browbeaten wife, Nora, and spunky daughter, Sara. The former meekly accepts the incoming fire; the latter shoots back at will. We’re watching Eugene O’Neill’s A Touch of the Poet, whose Broadway premiere was in 1958 although no one would mistake it for “Father Knows Best.” 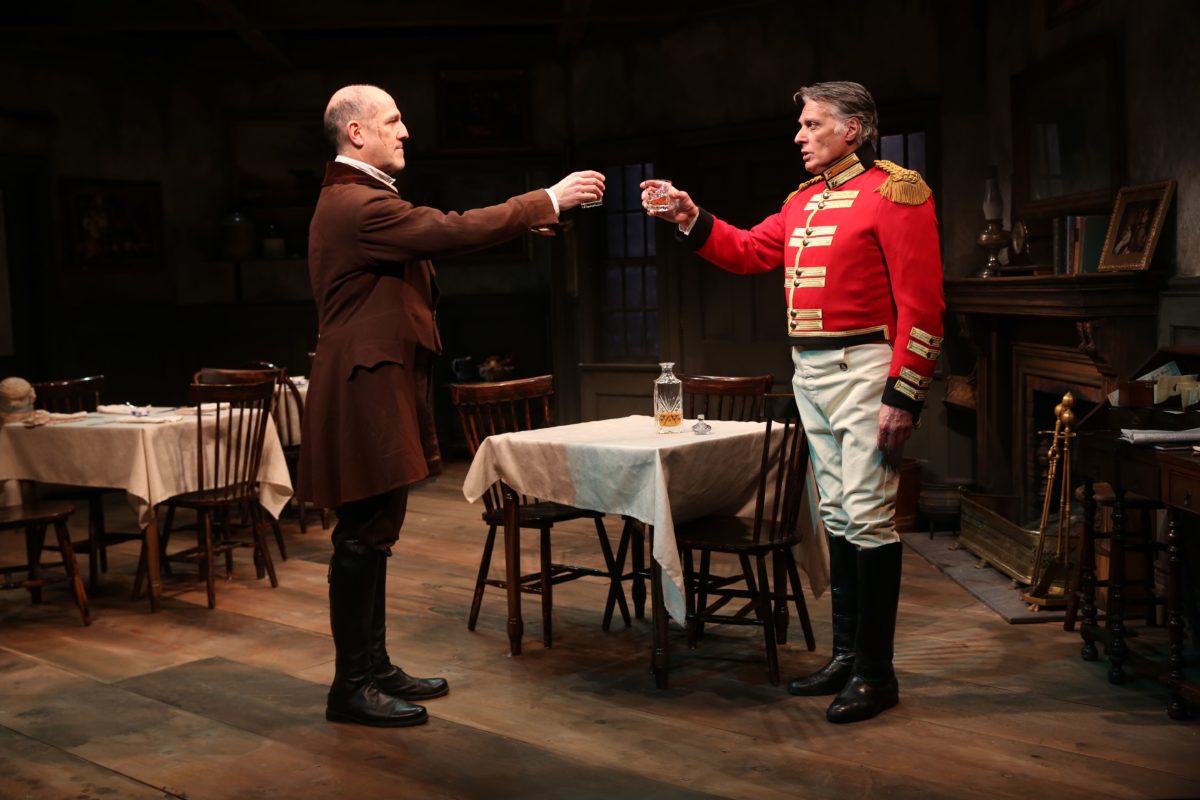 May 15, 2022: Before us on the Irish Rep’s miniscule stage is a lifelike simulacrum of the dining room in a village inn outside Boston, circa 1828 (the year of Andrew Jackson’s election). Two coarse men are speaking with thick brogues, and whiskey keeps sliding down gullets to familiar resting places. Before long, an imposing man named Cornelius (“Con”) Melody (pronounced “Mel-OWE-dy”) appears, spewing braggadocio and saying spiteful things to his browbeaten wife, Nora, and spunky daughter, Sara. The former meekly accepts the incoming fire; the latter shoots back at will. We’re watching Eugene O’Neill’s A Touch of the Poet, whose Broadway premiere was in 1958 although no one would mistake it for “Father Knows Best.”

When O’Neill, whom many believe to be America’s greatest playwright, died in 1953, he left several unproduced plays behind. Among them was A Touch of the Poet, completed as long before as 1942. It was planned as the fifth in a hugely ambitious cycle of nine plays covering 175 years in the life of an Irish-American family under the rubric, “A Tale of Possessors Self-Dispossessed.” Like Long Day’s Journey into Night in 1956, it received its world premiere, not on Broadway, but in Sweden, at the Royal Dramatic Theatre, in 1957. The Broadway premiere starred British actor Eric Portman as Con, Helen Hayes as Nora, and Kim Hunter as Sara.

A Touch of the Poet is widely recognized as a powerful, but flawed example of the O’Neill oeuvre, but it nonetheless ranks among his top achievements. It is now getting its fourth New York revival, the first coming in 1967, starring Denholm Elliot, the second in 1977, starring Jason Robards, and the third in 2005, with Gabriel Byrne. The current Off-Broadway version stars Robert Cuccioli as Con, Kate Forbes as Nora, and Belle Aykroyd as Sara. The play continues to have much to recommend it, but director Ciarán O’Reilly’s production fails to plaster over its cracks, largely because of two problematic performances.

This production went into Covid-related lockdown just before opening in March 2020, was then presented on Zoom in what was considered an excellent use of that technology (I didn’t see it), and is now available in the flesh. I may not be a big fan of this production, but any opportunity to watch a major O’Neill play is worth the time. (A revival Long Day’s Journey into Night just closed Off Broadway.)

Theatregoers seeing O’Neill’s drama of tempestuous familial strife in 1958 must have recoiled at the barrage of invective blasting from the mouths of its acrimonious father and daughter. Con is the pompous, stewed-in-booze, dictatorial great pretender who, though mortgaged to the chin, carries on as if he’s still the dashing, officer and a gentleman who fought under Wellington at the battle of Talavera on what he calls “the greatest day of my life.” He preens as though he were a poetically inclined, Byronic lord, to the manner born, refusing to accept his true social background as the son of a dishonest tavern owner. He even appears midway through to strut about in his glorious old dragoons uniform of gold braided red tunic and white breeches.

Sara wants to marry a wealthy, upper-class young man (unseen), whom Con deems a lowly “Yankee,” recuperating upstairs at their inn. When things don’t go his way, Con, who calls her a “slut,” thinks nothing of reminding his daughter that she’s a common peasant, a tavern waitress who can never rise above what she was born to be. Only when the marriage raises the possibility of a financial “settlement” does he offer any support.

Critic Brooks Atkinson, reviewing the 1958 production in the Times, perfectly captured how A Touch of the Poet fit into the O’Neill canon. “A hot-blooded Irish father, a submissive wife, a scornful, rebellious child, orotund talk, an abundance of drink and—most characteristic of all—gaudy illusions, pipe-dreams, a deluge of silly, romantic fantasies.” The Irish Repertory Theatre’s air is filled for two-and-three- quarter hours with all this baggage, enacted amid a blizzard of bombast and blarney, some high-flown, much of it low. Only the Irish-accented characters, including the supporting cast of bartender and guzzlers,  catch the right tone.

Cuccioli’s Con uses a formal American accent, slipping into brogue for one scene, but for an immigrant proud of his British military accomplishments, wouldn’t a British accent have been more appropriate? Con is a very complicated and difficult role, requiring an enormous amount of technique and energy to pull off. He is like the sea, raging one minute, and calm the next, shifting every time he barks his insults to a gentler tone, blaming his outbursts on the drink, only to blow up again the very next instant. Mr. Cuccioli, with his chiseled features, has the stature and fading matinee-idol looks, but his performance, for all its exuberance and presence, never seems more than skin-deep, the rapid shifts between smiles and sneering as artificial as the man he’s playing. Con is himself essentially an actor, playing a glorified version of himself, but we must now and then glimpse the real man inside. Mr. Cuccioli comes close to realizing this only in the last scenes, but until then he succeeds only in playing the façade of a façade.

Belle Aykroyd is similarly unable to penetrate the skin of Sara; she has pride and passion but no depth, and the confrontations with her father over the class-crossing marriage she seeks come off as little more than dramatized shouting matches. More grounded in honesty is Kate Forbes as the emotionally abused wife, Nora. Mary McCann, who has a big scene as Deborah Harford (the program says “Hartford”), the wealthy Yankee tradesman’s wife whose son, Simon, is Sara’s would-be lover, delivers her verbose speeches with clarity if not much else, not even a Boston accent. The brogueish Andy Murray, as Jamie Cregan, Con’s rough-edged subservient follower, brings some needed spark to the stage, and John C. Vennema has the right snooty quality for Nicholas Gadsby, the Yankee family lawyer.

Charlie Corcoran once again demonstrates how a clever designer can transform even a difficult stage like the Irish Rep’s into a believable interior, with doors to multiple places. Michael Gottlieb’s lovely lighting adds enormously to the production’s visual quality, as do the fine period costumes of Alejo Vietti and Gail Baldoni.

A Touch of the Poet is not perfect O’Neill. And this is far from a perfect production. But less-than-perfect O’Neill can still be nourishing. Given the famine of serious drama available at the moment, it will provide audiences hungry to sink their teeth into something meaty with a decent dramatic meal.