March 16, 2022: At the Irish Repertory Theatre, director Ciarán  O’Reilly’s revival of Eugene O’Neill’s,” A Touch of The Poet,” makes for a rarely engrossing evening of theater. 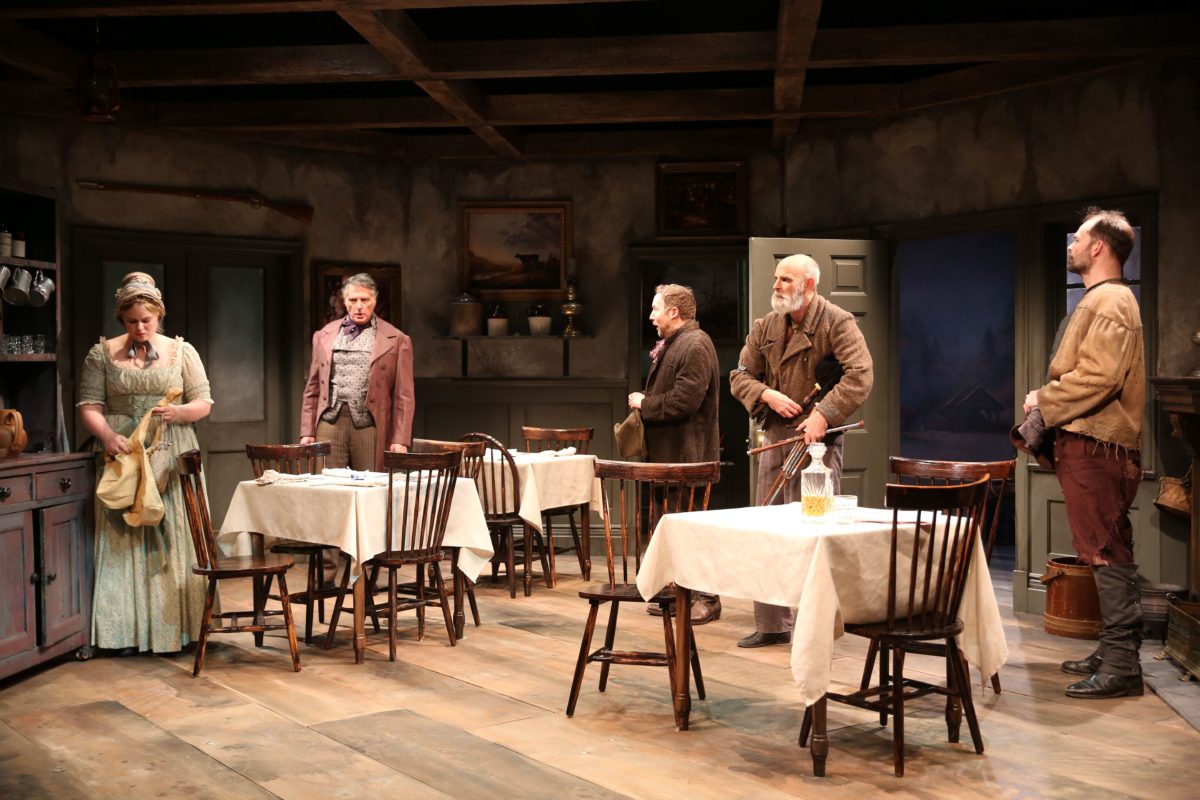 March 16, 2022: At the Irish Repertory Theatre, director Ciarán  O’Reilly’s revival of Eugene O’Neill’s,” A Touch of The Poet,” makes for a rarely engrossing evening of theater.

It’s set in 1828, on the threshold of Andrew Jackson’s presidency, but in Con Melody’s Inn outside of Boston, the stench of Irish whiskey primarily pervades. There is something similar though, between the savagery of America’s frontier days, and the savagery of this Irish immigrant, Cornelius Melody (pronounced Mel-OH-de). As portrayed with some bravura by Robert Cuccioli, Con is the very model of a modern drunken fascist.

Cuccioli brings O’Neill’s sense of the Vaudevillian to his portrayal. His Byronic recitations display a man of vainglorious pride

Also, like James Tyrone in “Long Day’s Journey into Night”, Con destroys his wife, in this case Nora. As played by Kate Forbes, she not only kneels to him, she seems to strive for the opportunity. By contemporary standards of spousal abuse, such compliance appears customary.

Enraged, bloated with narcissism, Con strikes his rebellious daughter, murders his mare, and drinks, and drinks. and drinks.  What would an O’Neill play be without a free flowing bar?

It’s certainly a theme of his. So is the free flowing conversation that is confessional, albeit in the style of repetitive banter. Certainly, when Con and his family and friends talk about his violence, with “it’s the liquor speaking,” we understand how excusable the inexcusable has become.

While the Melodys look like a typical dysfunctional family, they’re also emblematic of a people trying to survive in a strange new land. Meanwhile, in the background, Andrew Jackson’s followers are strategizing a move that will lead to the massacre of Native Americans. Such contrasts beget a dark realism that carries through daily conversation.

Speaking directly, as though shooting from the hip, the characters express themselves pretty openly. They’re direct and when they choose to be, provocative. After seasons of watching streaming TV series, it’s restorative to hear O’Neil’s dialogue. While the production isn’t Aaron Sorkin speed, the play moves smoothly and quickly.

More importantly, O’Neill’s relevance speaks to us.  There’s Con’s insane violence – a need to wreak havoc on the world – the prevailing dilemma of 1942, when O’Neill wrote the play. Additionally, the scrutiny of class exposes a threating world around us.

War looms large also in the play’s festivities. The annual celebration of Con’s victory in the Battle of Talavera when he was a major in the British Army is the occasion around which the story revolves.  Intertwining, Con’s daughter Sarah (Belle Aykroyd) is discovering a romance with an an unseen young man who they’ve taken in, since he fell ill. Over him, Sarah presides like a nurse protecting a young soldier from the raging war outside. Simon, fortunately, a young man and a poet is more of the transcandendalist, like Thoreau.

In a strange and darkly comic interlude, the injured Simon’s mother, played by Mary McCann, confronts Con about his daughter’s relationship with her son. She’s quite the wise snob. Portraying a haughty Yankee with a sense of self humor, she’s also hauntingly prophetic.

It’s she who utters the refrain we hear throughout the play, about those who “are not what they seem”. “Such people are dreamers,” she opines. And from our own experience, we know such people are not welcome here. Establishing her borders only breeds more violence.

Set in a dark, iconic-looking tavern (Michael Gottlieb’s lighting and Charlie Corcoran’s scenic designs) with the sound of men clamoring around the bar (sound design by M. Florian Staab) creates the ongoing life. With the characters in the inn, dressed in heavy hemp period costumes (by Alejo Vietti and Gail Baldoni), we sense what it feels like to live in this hardened environment.

It’s unusual to find two hours and forty minutes in the theater so entirely engrossing. It’s even more unusual when it’s a rarely produced drama set in the early 19th century. But it is a great pleasure to see this work by Eugene O’Neill performed by such steadfast actors.