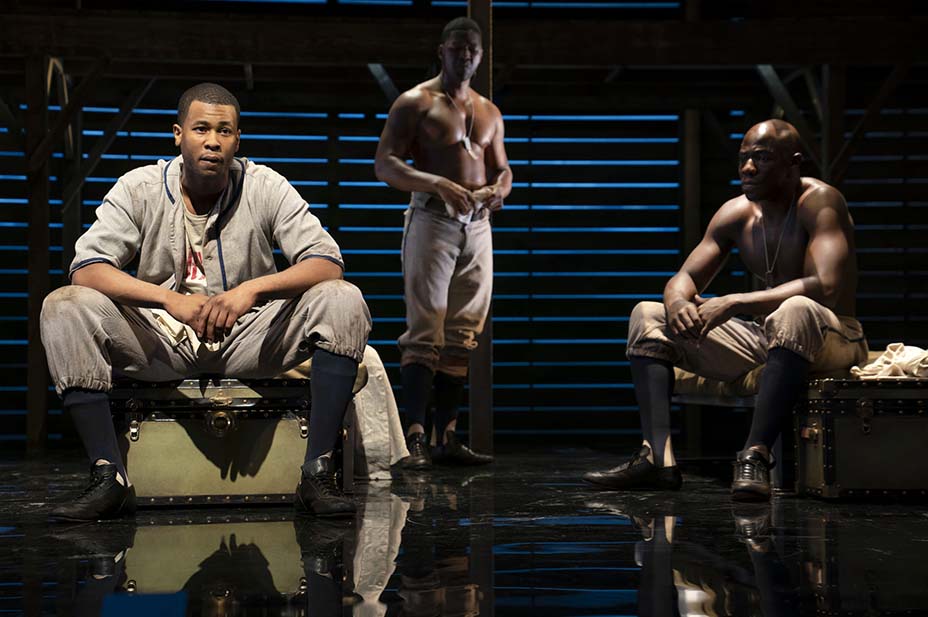 Set in a segregated U.S. army camp in Louisiana during WWII, the story is told by an ensemble of twelve actors, most of whom portray African American soldiers. It opens on the murder of Sargant Waters played with alcoholic self-loathing by David Alan Grier. Grier certainly brings the baggage of internalized racism to this role. As Waters, he treats his men brutally; usurps their sense of dignity; and destroys the weak among them. He’s out to save his race, apparently.

Directed by Kenny Leon, the action is focused and intense. Regardless of lengthy exposition, the pacing is clean and rapid. The politics of racism as we see it here has such presence that it’s hard to objectify. But it’s racism clearly that defines, fuels and frames their interactions. This is war time. Murder is the plan.

It’s astonishing actually to see the sense of dedication and patriotism these young soldiers display even though they are giving their lives for a country that has never protected theirs. Each of Fuller’s characters are beautifully drawn.

Most of the first act revolves around the success of the camps’ baseball team at a time when the Negro league was at a height of popularity. Curiously, they are all undermined by a player named Peterson, artfully portrayed by NFL All-Pro Nnamdi Asomugha. J. Alphonse Nicholson plays the role of Peterson’s victim delicately and sensitively.

He is one powerful actor.  As the lawyer Davenport, he leads the courtroom drama, interviewing everyone who was there at the time of the murder. His observations and conclusions he reports directly to the audience. Underwood’s oracular style is honest and spellbinding.

There isn’t anything simplistic about this particular murder mystery. It’s expressed simply and it’s performed eloquently, but the conclusions are baffling.

Through the process of this investigation a racist, Sargant Waters, is disclosed. The murderers, however, are equally threatened by their own racial identity. It’s not even about black and white. It’s more about the psychological effects of racism. It’s about hatred.