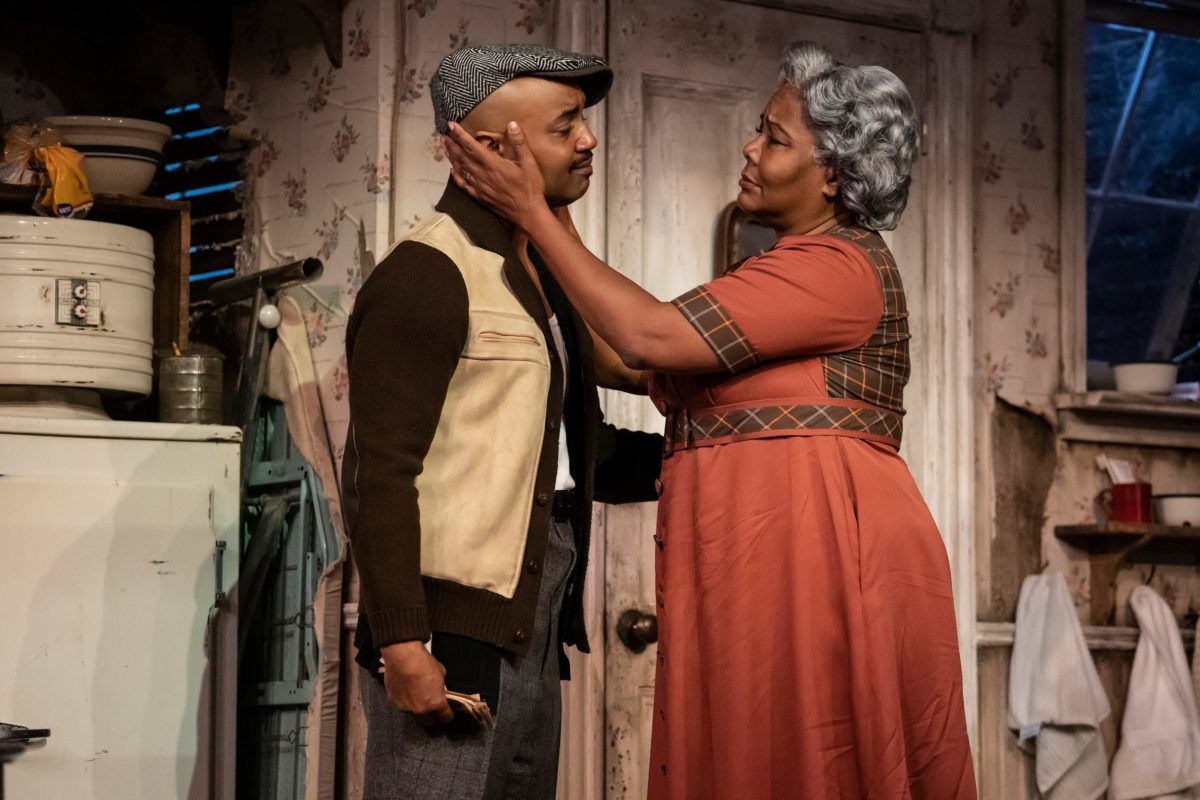 While both plays have been given multiple important New York revivals, their current coexistence in equally powerful revivals, Salesman on Broadway and Raisin Off Broadway at the Public Theater, is a first. No better opportunity could exist for comparing these bookend classics about American society and culture in the postwar period, and to ponder how much, or little, things have changed since then.

In each there are two struggling siblings seeking independence from their constricted lives under the wings of powerful parental influences: Miller’s oppressively loving father, Willy, and strong, but matrimonially subservient mother, Linda; and Hansberry’s even stronger, but widowed, matriarch, Lena. In Salesman the siblings are the grown-up brothers, Happy and Biff, required for plot purposes to share, for the moment, their childhood room at their parent’s house. In Raisin they are Walter and Beneatha. Walter lives with her in their tiny apartment along with his wife, Ruth, their ten-year-old son, Travis, and Lena.

Walter, disgusted by what he deems his servile job as a chauffeur, is certain the future lies in opening a liquor store with friends; Beneatha, wooed by two well-off suitors, plans to become a doctor, and perhaps even move to Africa. The American dream has thus far failed all four, but money promises to make the dream come true. Only the insurance money from their father’s suicide promises possibilities for the feckless, unmarried Biff and Happy; for the more aggressive Walter and Beneatha the insurance money from their father’s death is already there. The problem is how to use it, especially when their commanding mother, Lena, wants to buy a new house. Walter is also a husband and father, in this regard sharing some of Willy’s misguided qualities. He also, like Willy, does something that tragically betrays his family’s trust.

Because the Youngers are Black the play drills into sociological issues not intended by Death of a Salesman, at least not as Miller conceived it.Serendipitously, however, the current Salesman revival casts the Loman family as Black, which, without changing the dialogue one bit, introduces a charged atmosphere that forces us to consider, at the back of our minds, race-related concerns, even if they’re more implicit than in the highly explicit Raisin. (Admittedly, the bizarre casting of a white Charlie and Bernard muddles the concept.) This draws the two plays together more closely—along with other correspondences not mentioned here—something made even more obvious when Raisin’s director, Robert O’Hara (Slave Play), introduces Lena’s late hardworking husband, whom she holds up as a model to her flailing son, as a silent, ghostly presence. It’s hard not to see him as an allusion to Uncle Ben’s ghost in Salesman.

Death of a Salesman ends in grief, at Willy’s graveside. After a potentially tragic loss, A Raisin in the Sun finishes on an upbeat note as the Youngers choose family cohesiveness and brave defiance of racial threats by moving into a potentially hostile white community. Mr. O’Hara, unfortunately, chooses to twist the conventionally optimistic ending by creating an elaborate scenic coda insisting that their choice will only lead to more unhappiness. However true its implications, it’s not what Hansberry wrote and does a disservice to her intentions as demonstrated by her script. Imagine a director of Salesman with rose-colored glasses creating an epilogue in which Biff and Happy are seen a few years later having used the insurance money to become entrepreneurs, a sign flying in with the glowing words, “Loman Brothers, Inc.”

This ending is just one of several interpretive interpolations introduced by O’Hara, like the ghost of Lena’s husband, or how Walter breaks the fourth wall so that, isolated in a spotlight, he can deliver a minstrel show-like spiel about how he plans to submit to the white man who wants to prevent the family from moving into its new home. Brilliantly performed and unavoidably applause-generating, it stops the show; like the coda reveal, however, it gains attention at the expense of disturbing the show’s integrity.

Fortunately, this Raisin is no dried up grape but a dynamically pulsating slice of kitchen-sink passion, performed with a tidal wave of emotion that sweeps all in its path. This family talks, and, especially, argues the way we all do in real life, shouting over each other, speeches overlapping, feelings exposed like live wires, electric currents snapping and crackling in every line. The hyped-up performance is, in fact, every bit as raw as the equally ferocious Salesman production uptown, taking a moment here and there for a funny wisecrack, but rarely letting up on the relentless need to get in the last word.

As excitingly played by Francois Battiste (The Good Negro), Walter’s hotheadedness, like Wendell Pierce’s as Willy, may sometimes make him unpleasant company, but his artistic vibrancy is undeniable. Like the Lena of the toweringly talented Tonya Pinkins (Caroline, or Change), whose queenly Lena commands every moment she’s on stage, it will surely be in the running when awards time comes around. Note, however, that Mr. O’Hara ends Act Two by having Lena suffer what seems to be a stroke, only for her to reappear an hour later, somewhat shaken, with one hand shaking violently like someone with Parkinson’s Disease. Yet no one, to use Miller’s famous words, dast pay attention to it as the family awaits the moving men. Like the choices mentioned above, it’s an unnecessary distraction from what’s otherwise a Raisin to remember.

Clint Ramos’s naturalistic set seems a bit dingier than that of most revivals, even including black mold on the ceiling molding, although the stage directions suggest Lena has done what she can to hide the place’s decrepitude. His surprise reveal at the end, much as I disagree with its presence, does exactly what’s intended. Karen Perry’s costumes capture the period without being perfectly accurate, and Alex Jainchill’s lighting helps make it all look right.

Aside from some questionable gimmickry, this brisk, but nearly three hour-long production, is about as explosive a A Raisin in the Sun as you’ll ever see. And if you visit it in tandem with Death of a Salesman you’ll have the rare opportunity to compare these blockbuster pillars of postwar American drama, appreciating how each sheds light on the other. Neither is to be missed.