Which song was written on the fly in the lobby of La Jolla Playhouse, essentially helping Sutton Foster make it big? How were Burt Bacharach’s lyrics influenced by his own circumstances when he wrote “I’ll Never Fall in Love Again” for Promises, Promises? Which song was written because Guys and Dolls was in trouble when it ran a tryout in Philadelphia? The answers to these questions and so much more were provided and performed in A Funny Thing Happened: Songs from the Road to Broadway, a captivating concert event that took place on June 13th at Feinstein’s/54 Below.

Straight from a sold-out run at the 92nd Street Y, three-time Tony Award winner Kathleen Marshall brought stories of songs that “saved the day” to an audience in the most intimate of settings, and chose four of Broadway’s most talented performers to help relay the tales. With the show under the musical direction of David Chase, a lucky audience was treated to Rodgers and Hammerstein, Gershwin, Loesser and Yeston, amongst many other prolific songwriters. The stories behind the songs were as intriguing as the pieces themselves; a few of the numbers presented were actually cut from shows (“Ten Percent” from Chicago and “The Man I Love,” from both Lady Be Good and Strike Up the Band!) and others were changed multiple times before finding the right fit (“Younger Than Springtime” in South Pacific).

Greg Hildreth (Peter and the Starcatcher, The Robber Bridegroom) brought humor and surprising amiability to “Hook’s Waltz” from Peter Pan, with lyrics such as “Who’s the creepiest creep in the world?” His deep vocals and penchant for infusing animated charm into every one of his songs has made him a Feinstein’s/54 Below mainstay, and after treats such as “Ten Percent” and “Oldest Established” (Guys and Dolls), it’s no wonder that is the case. Aaron Finley (Rock of Ages, It Shoulda Been You) and Jessica Vosk’s (Fiddler on the Roof, Finding Neverland) duet on “You’re Just in Love” brought down the house, especially in part due to Vosk’s fantastic twist on Ethel Merman’s take in Call Me Madam.

Merman was not the only powerhouse that Vosk echoed that evening. Marshall explained the unusual creation of Kander and Ebb’s “Sing Happy,” the 11 o’clock number in Flora and the Red Menace, and how it propelled Liza Minelli, an unknown 19 year-old making her Broadway debut, to a Tony award. When Vosk took on the big number, she too brought the house down. Elena Shaddow (The Visit, The Bridges of Madison County) imbibed her numbers with energy and charisma. Most fantastic were her duets; first with Vosk on another Guys and Dolls number, “Take Back Your Mink,” and later with Greg Hildreth on “I’ll Never Fall in Love Again.” Shaddow’s versatility demonstrated talent of epic proportions. 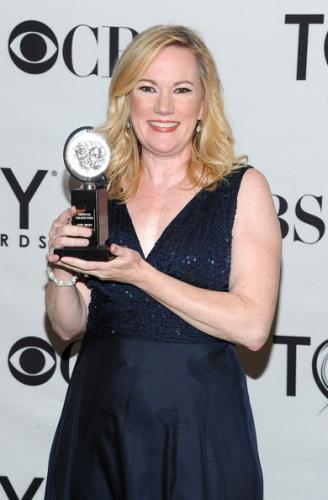 Marshall ended the evening with the story of a song that had its vocal arrangements written on a train from New Haven to New York, where it was meant to be a peripheral piece for the musical. Not only did it become so much more integral to the show, it also became the title. The entire cast ended on a grand note with “Oklahoma,” the perfect tune to cap off an evening celebrating a passion for the stories of Broadway, and the funny things that have happened while great songs and shows thankfully found their way there.