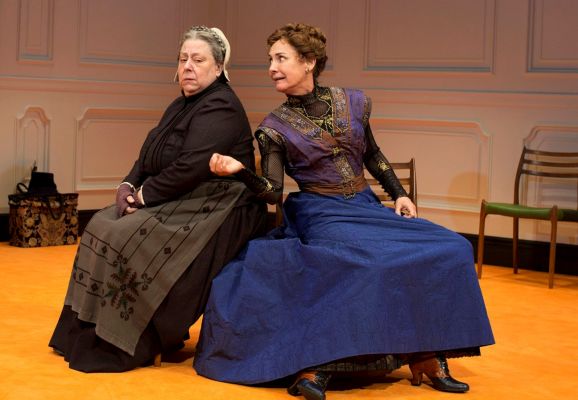 Jayne Houdyshell and Laurie Metcalf in “A Doll’s House, Part 2”

When Nora (Laurie Metcalf) walks back into her old home (scenic designer Miriam Buether’s minimalist victorian home with high paneled walls and almost no furniture), fifteen years later, she’s a bit nervous, but definitely in control. She’s met by the family servant, Anne Marie (Jayne Houdyshell), the only one who knows Nora’s back. We soon learn why.

It turns out, Nora has become a famous author of feminist literature, writing under a pseudonym. But recently, an influential judge who believes he’s lost his wife because of Nora’s influence has found out not only who Nora really is, but also that she has never been divorced. In 19th century Europe, this could cause significant legal problems and Nora has come back for that divorce.

Not surprisingly, Torvald (Chris Cooper), who has let on that Nora has died, is not exactly compliant. So Nora tries to enlist first the help of Anne Marie and then Emmy (Condola Rashad), the daughter she abandoned fifteen years ago. Emmy has her own agenda and her own ideas about how to solve the problem. In many ways she’s her mother’s daughter.

Considering Sam Gold directs, there’s not an overabundance of directorial flourishes, except for the unnecessary projection of the names of the appropriate characters at the beginning of scene transitions. For the most part, Gold lets his excellent cast work their magic.

Metcalf is superb as the imperious and impervious Nora. When her conversations with Torvald become debates, we’re pretty sure who’s going to win. Yet Cooper never lets Torvald become an object of pity or scorn. As for Rashad, although one may well question why an African American woman should be cast as the daughter of a white man and woman in 19th century Norway, her convincing acting soon makes the audience believe the impossible.

If Houdyshell alone creates a likable character, this is entirely consistent with the satirical nature of Hnath’s work. This play may be set fifteen years after Nora left Torvald, but the language Hnath uses makes it clear he is writing about men and women today. When each of the characters expresses his or her understanding of what happened in the Helmer household, raising questions about the nature of marriage, motherhood and responsibility, what we are hearing is clearly a modern perspective on these issues.

A Doll’s House, Part 2 is often quite funny and always penetrating. It also keeps the audience in a constant state of uncertainty, as one idea that seems to make sense gives way to another, equally plausible. Be prepared for some very interesting after-theater conversations.