To be estranged from the world – one must have done something to get there.

November 10, 2022: In “A Delicate Balance,” Edward Albee’s Pulitzer Prize-winning drama, currently in its first Off Broadway revival, at the Connelly Theatre, we begin at the end of life’s journey. We begin with estrangement, when the familial and social bonds have arrived, in a state of collapse. 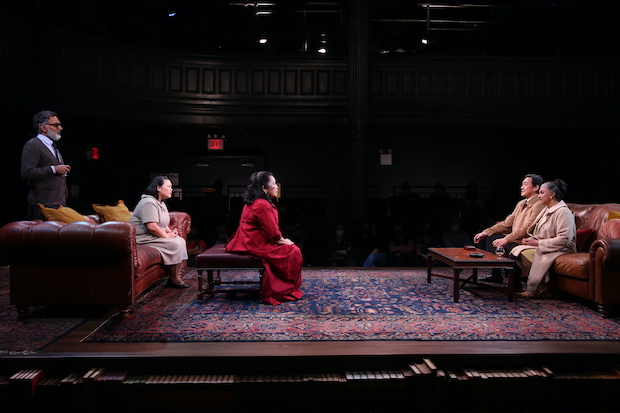 To be estranged from the world – one must have done something to get there.

November 10, 2022: In “A Delicate Balance,” Edward Albee’s Pulitzer Prize-winning drama, currently in its first Off Broadway revival, at the Connelly Theatre, we begin at the end of life’s journey. We begin with estrangement, when the familial and social bonds have arrived, in a state of collapse.

It’s like “losing one’s mind,” Agnes (Mia Katigbak) opines early in the first Act. That inability to connect in the world, to live humanely is a disease, a plague, which confronts them. It’s Agnes, the family matron – a stern authority, who first expresses the premonition of betrayal. To that end, Act One turns into a litany of disappointments, rejections, and failed loyalties, leaving them all plenty to argue about…Act II.

As directed by Jack Cummings III, the action unfolds as an allegory about love, even though the characters speak hatefully, and stab to wound. The allegory of love, in which courtly manners are portrayed, and emotions masked, would suit Agnes all too well. Love, in terms of feeling for another, is something of which she is simply not capable. To the contrary, like many of Albee’s women characters, she promises there will be plenty of alienation in store.

In this revival, a partnership between The Transport Group, and the National Asian American Theatre Company, all of the characters are played by Asian American actors. It’s billed that way. As for the characters in Albee’s play – they’re highly repressed, terribly rich WASPS living in a large suburban home. It’s noteworthy, as Mel Gusso points out in his biography of Edward Albee, “A Singular Journey,” that the character of Harry (played here by Paul Juhn) is based on Albee’s adoptive parents’ friends, Harry Winston the jeweler, and his wife. Here they appear as Harry, and Edna (Rita Wolf).

But this picture of repressed, narcissistic, and avaricious suburbanites is universal. It does not matter what race or national origin the actors are. It does matter that they can experience living in a family where there is no warmth, no love, and everything exists beneath an icy hot surface.

And while Cummings brings a great deal of insight to Albee’s play – to what it means to love, and be loved, the actors become marionettes to his concept. The dialogue, much as it is poetic, is given more weight as poetry, than for the quality of the shun it truly delivers. In that sense, the play lacks action.

Albee’s banter, unlike Mamet’s for instance, teases us with the rhythm of beautiful language. It’s definitely sentimental. However, in earlier Broadway revivals – 1996 and 2014, we experienced the characters through their restraint, and constant tension. The words sonorous as they are, are also iterations of data – the rules to this betrayal game, which are repeated over and over again. It’s an obligation of sorts to keep the conversation. In this way, we observe the irony of the characters’ estrangement, because they miss the most beautiful things – or they just can’t hear them.

The cast is strong, in service of the allegorical story telling. A stage actor known for her grace and tenacity, Mia Katigbak plays Agnes with more elegant swagger, than unyielding narcissism. And she speaks every word of her lengthy monologues as if they were precious. The pacing overall is slow, and by the end arduous.

In mining Albee’s ironic humor, Cummings directs the piece with comedic elements that are not especially intrinsic. Carmen M. Herlihy makes a startling entrance as Agnes’ alcoholic sister, Claire. But the surprise wears off as she tries to top herself. As she gets more drunk, she gets more self-conscious, speaking with a hint of a British accent, and then a Southern one. Maybe the Noel Coward reference holds up, but Blanche Dubois is not an image in Albee’s play.

The overall sense of clownishness undermines the characters’ sophistication. Julia (Tina Chilip), their multi-divorcee daughter, who returns after each of her failed marriages wields a gun like a sitcom star. It’s not a stunt, because it’s not clever. It’s an embarrassing attempt to be undermining that misses the point – pleading for mother’s attention.

Of course, her rage is directed at the imposters, Edna and Harry who have arrived out of fear, to quell their angst in the breasts of their dear friends. Rita Wolf portrays a particularly unforgivable Edna, and Harry for his part is a sugary pill, like a placebo. We can’t expect too much.

But the character that seems to falter under the weight of the production is Agnes husband Tobias (Manu Narayan). By the end of the play Narayan descends to whining, in a ludicrous attempt to arouse pity, for his pathos.

In spite of a lopsided production, there is something thrilling about hearing the play spoken in this eloquent way, especially in the hands of Mia Katigbak. To glean every word certainly brings a deeper understanding.

Peiyi Wong’s set design, with facing brown leather couches, a well-stocked bar, and beautifully bound books holding up the foundation of the traverse stage are very Albee-like, as is the menagerie of cocktail glasses under the platform. For the audience sitting ringside around the corridor stage, it’s a bumpy ride.