September 27, 2021: It takes a lot of chutzpah for a show to announce beneath the title on its Playbill cover, almost as a subtitle, “A New Musical Hit in the Making.” This is, after all, a city where the “h”-word rightfully belongs to works of creative genius, like Come from Away, Hadestown, and Hamilton, to name a few. In the case of A Commercial Jingle for Regina Comet, though, with its sixteen producers,it’s hard not to feel that pride goeth before a fall. 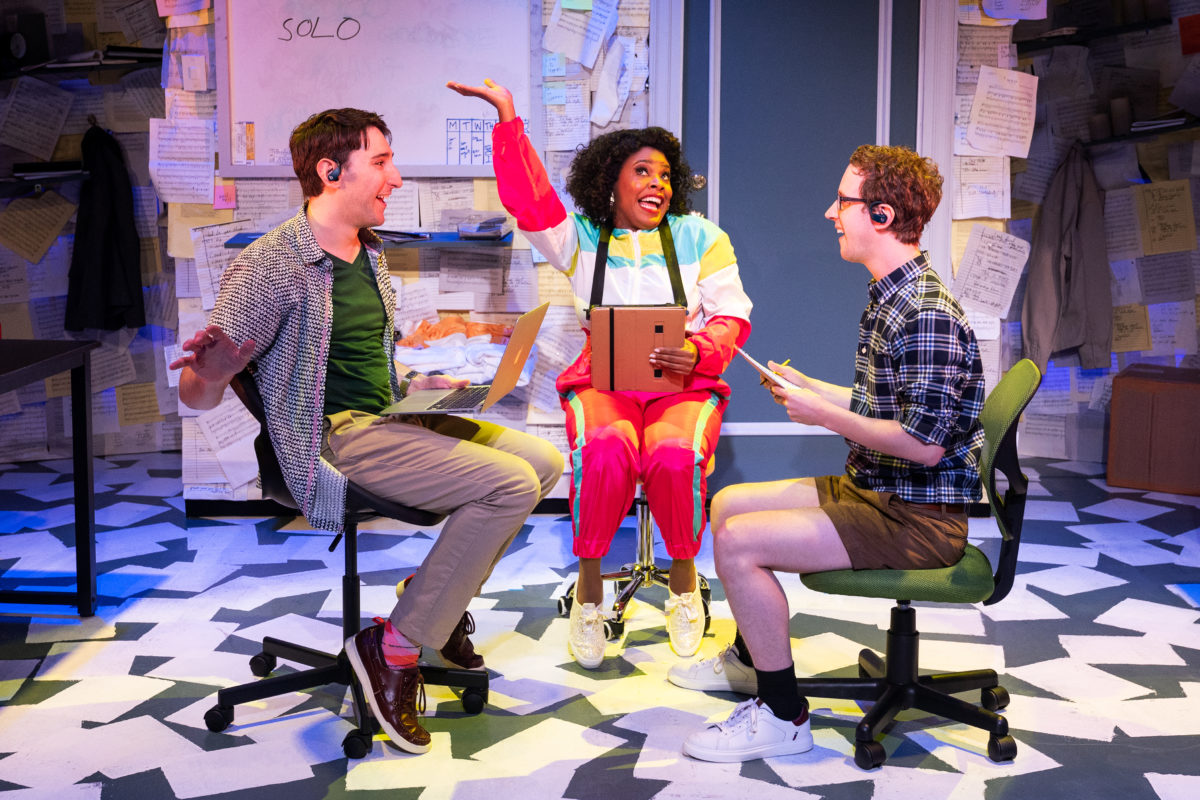 September 27, 2021: It takes a lot of chutzpah for a show to announce beneath the title on its Playbill cover, almost as a subtitle, “A New Musical Hit in the Making.” This is, after all, a city where the “h”-word rightfully belongs to works of creative genius, like Come from Away, Hadestown, and Hamilton, to name a few. In the case of A Commercial Jingle for Regina Comet, though, with its sixteen producers,it’s hard not to feel that pride goeth before a fall.

That clunky title, by the way, actually capsulizes the show’s content. Regina Comet (Bryonha Marie Parham) is a big-voiced, fortiesh, pop superstar trying to get her career back on track by shilling her own perfume brand (or “fragrance,” as she puts it), one aimed at the mid-teen market. The name she gives it is “Relevance,” based on her own need to feel relevant again, but there’s little else of relevance on view. One of the musical’s three show-biz characters is gay, but nowadays that’s a given and not a social commentary.

The show opens with Regina expressing how unhappy she is with the commercial being taped to sell the fragrance. She insists on a catchy new jingle, one that will rocket her back to the superstar A-list. She may want “the greatest songwriters OF ALL TIME,” but what she gets is the cheapest she can afford.

This introduces a pair of young, ambitious (but desperate), Barry Manilow-worshiping songwriters, neither of them given a name. This is the third show in a row I’ve seen using this tired, frustrating device. Man 2, who’s also an aspiring magician, is played by Ben Fankhauser. The Other Man is taken by Alex Wyse. He’s the gay one, who never stops quoting his iconoclastic Grandma. Fankhauser and Wyse also wrote the rhymed lyrics (some adroit, many not), uninspired music, and deliberately silly book. Much of the farcical humor felt like a sledgehammer to me, but I have to admit it had the audience laughing through its masks.

A typical witticism comes when Regina sounds the writers out on her needs: “I’m no scientist, but I’m looking for chemistry.” Or her lyric, “MY TEAM IS WORKING HARD TO SPIN/MY IMAGE AND MY CLOUT/BUT INSTEAD OF GETTING RESTYLANE/I’VE GOT A FRAGRANCE COMING OUT.” And you’ll need to know the band Hanson if you’re going to break a smile at half-a-dozen weak Hanson jokes. Not that knowing them is likely to crack you up.

I did chuckle at some of the Jewish jokes—blame it on my DNA—and occasionally gurgled at a lyric. One I liked comes when Regina sings of her golden days: “ALL MY PETS WERE FAMOUS IN KOREA/I GOT PRISON LETTERS BY THE TON/I HAD HOUSES IN MY HOUSES/PLUS A FLEET OF BOATS I SANK FOR FUN.” Most of the time, though, my eyes rolled with dismay more than they teared with hilarity.

What narrative there is covers the difficulties of writing songs, the men’s background as Jewish boys who used to write Shabbat musicals at Camp Rosenblatt, the romantic heartbeat Man 2 begins to feel for Regina, the rivalry this creates between the friends, and the arc of Regina Comet’s career, which involves lasers and astrophysics (don’t ask). Bottom line: this is a show about writing a jingle.

Nearly all the scenes in the episodic script, regardless of locale, including a performance arena and fancy vegan restaurant, are enacted in a small office with a whiteboard and walls covered with Post-Its. It’s efficiently designed by Wilson Chin and crisply lit by Aja M. Jackson. Costumer Sarita Fellows dresses Ms. Parham mostly in a colorful jogging outfit, but gives her several opportunities to sparkle, as when she rocks a top covered in tiny mirrors. The guys wear basic grunge (Man 2 is fond of khaki), but they, too, get some razzle-dazzle during the enthusiastic finale.

Although it was unintentional, that closing number provided the funniest moment at the preview I attended. When Mr. Fankhauser made a quick onstage change from streetwear to sequins, his trousers dropped to his ankles—and stayed there—as he gamely tried kicking them away while dancing to Stephanie Klemons’s choreography.

The 80 uninterrupted minutes of A Commercial Jingle . . . move swiftly under Marshall Pailet’s briskly-paced, occasionally clever direction. A few bits stand out, like when Regina appears in a doorway within a frame, creating the impression of a full-body Facetime call. A good deal of the script, in fact, deals with smartphones and social media namedropping—Google, Bluetooth, Instagram, Twitter, Yahoo, and so on, all get their placement moments.

I’d guess that about eighty percent of the show is sung-through. While the twenty or so songs are designated as specific numbers, the impression is of a musical stream, much of it belted as power vocals, with little tonal variation. Far too many sound similarly unmelodic and mechanical. Perhaps this owes something to music director Alex Goldie Golden’s relying largely on an onstage synthesizer, combining both keyboard and pounding percussion.

The Fankhauser and Wyse score resembles many similar shows in its reliance on lyrics offering fast-paced exposition that bursts into big notes, followed by more rapid exposition concluding in more big notes. When done well (think Come from Away) this kind of thing can be memorable. Here, not so much.

Rodgers and Hammerstein never sang in their shows, which is the only advantage Fankhauser and Wyse have over them. They’re spirited fellows delivering one-dimensional performances of one-dimensional characters singing one-dimensional songs; ditto the talented Ms. Parham, whom I’d much prefer to see and hear in something more theatrically nourishing.

I don’t think A Commercial Jingle for Regina Comet will live up to that line on its Playbill cover, but I’ve been wrong before.

“The health and safety of our company and audience is our top priority. Our current COVID safety plan requires all audience members to show proof of full vaccination and to wear a properly fitting mask at all times when in the theater. Those with a medical condition, closely held religious belief, or children under 12 who are unable to get vaccinated must show proof of a negative test within 72 hours of attendance. Please note that these measures are subject to change based on evolving health and safety guidance.”