December 12, 2022: As it has on five earlier occasions since 2002, the Irish Repertory Theatre has retained its venerable name despite leaping over the Irish Sea to Wales for artistic director Charlotte Moore’s musical adaptation of Welsh poet Dylan Thomas’s A Child’s Christmas in Wales. Atmospherically and accent-wise, the show, despite being based on a prose poem by a great Welsh writer remembering his childhood Christmases in Wales, comes off as more American than Welsh. 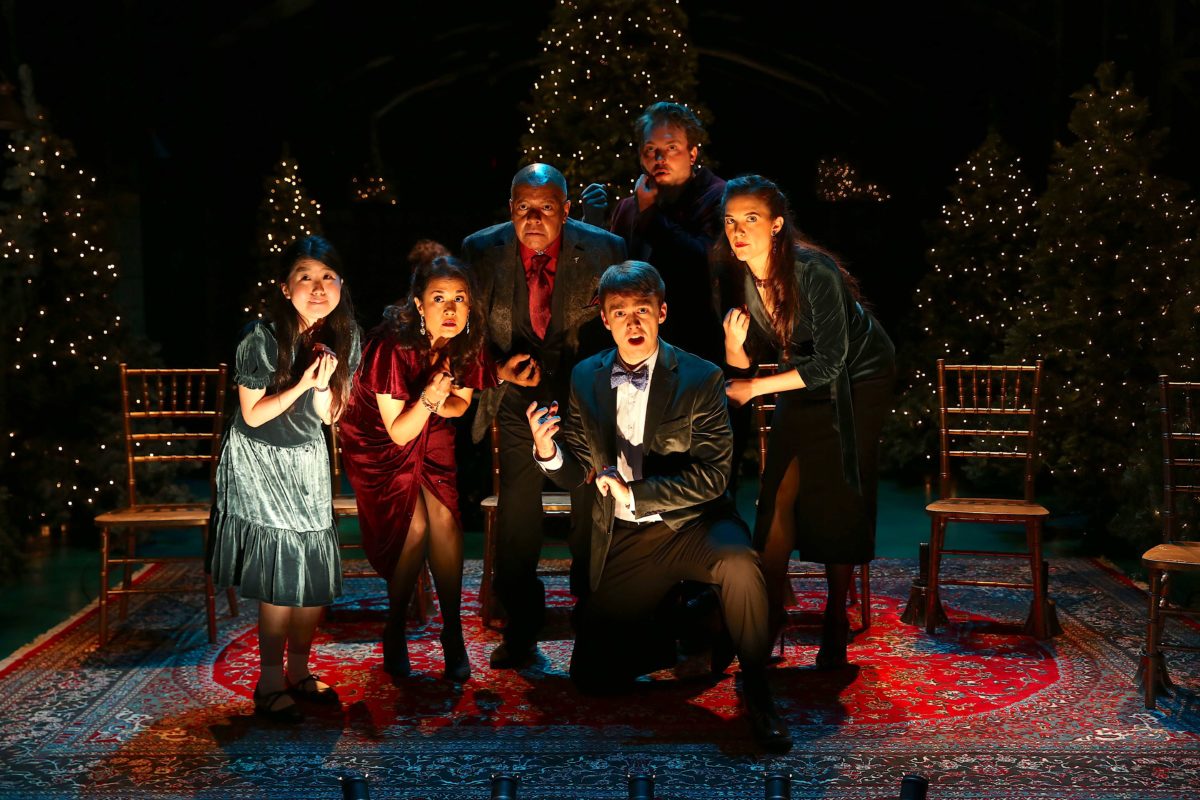 December 12, 2022: As it has on five earlier occasions since 2002, the Irish Repertory Theatre has retained its venerable name despite leaping over the Irish Sea to Wales for artistic director Charlotte Moore’s musical adaptation of Welsh poet Dylan Thomas’s A Child’s Christmas in Wales. Atmospherically and accent-wise, the show, despite being based on a prose poem by a great Welsh writer remembering his childhood Christmases in Wales, comes off as more American than Welsh.

It’s highly polished, beautifully staged (by Ms. Moore), tastefully designed, excellently sung, and musically lovely, but, for someone like me, who missed its earlier iterations, it comes off more as a Christmas chorale of over two dozen traditional and modern tunes (six with music and lyrics by the gifted Ms. Moore), tied together by a loosely integrated, less than faithful rendering of Thomas’s classic about Christmases past.

A Child’s Christmas . . . , which began in 1943 as a 15-minute radio piece, was recorded for Caedmon by the author in 1952 in what became a highly successful effort in the emerging field of literary recordings. One can easily access it on YouTube, where multiple other versions, from recordings to movie and TV (animated and live action) dramatizations, also are available.

At the Irish Rep, the solo voice of a mature Thomas recreating the images of his boyhood is divided among six performers, stylishly costumed by David Toser. They sit or stand around slight wooden chairs lined up across the stage against a background of seven Christmas trees, duly decorated and lit, three smaller ones on each side and a large one up center; all are contained within the girders and upstage mirror created for the last Irish Rep production by scenic master John Lee Beatty, responsible as well for the present show’s elegant design. Michael Gottlieb paints the diminutive stage with warmly embracing lighting. And pianist David Hancock Turner, situated between the upstage tree and the downstage players, offers perfect accompaniment to the many musical numbers, beautifully “supervised,” which I assume means “arranged,” by John Bell.

Still, the division into parts broken up among the six performers and continually interrupted by extensive musical selections, greatly diminishes Thomas’s already minimal narrative thrust, and seriously detracts from the idea of one man’s memory in favor of—even if only vaguely—reenactment. The actors all speak well and clearly, but the author’s remarkably rich language, stuffed like a Christmas stocking with words of his own devising, rarely makes a mark as the actors concentrate on vivifying their characters with colorful line readings and business, much of it, unfortunately, made fuzzier by being set to music.

Not that I’m crazy about Thomas’s own once lauded performance on the recording, delivered in what now comes across as a theatrically fluty vocal style reminiscent of old-time Shakespeareans speaking in hammily posh tones. Dated as he sounds, however, his reading comes much closer than this overly busy interpretation to communicating the imagistic barrage of snow, food, family, friends, neighbors, gaslight, cats, church bells, gifts, pipe smoking, and local color that make Thomas’s prose poetic.

Having read the text again before seeing the show, I was surprised to hear many unfamiliar lines, including some in which young Dylan is addressed directly by family members using his name. Is there a different version of the material than the one available (on more than one site) online? One must assume that Ms. Moore actually wrote these passages herself in a faux Thomas manner. The program offers no help. Moreover, chunks of material have been cut and the segments are not all in the same sequence as they appear in Thomas’s original.

The talented cast has not been selected for any resemblance it may have to the characters in Thomas’s writing. There are two classily attractive women, Kerry Conte and Ali Ewoldt; a sweet-faced girl who looks to be in her early teens, Kylie Kuioka; a man in early middle age, Ashley Robinson; an older man, Jay Aubrey Jones; and a boyish, bow-tie wearing fellow (Dan Macke), who resembles a gee whiz boy-next-door from a 1940s movie. It’s the clean-cut latter who represents the poet; Thomas’s notorious dissoluteness obviously plays no part here.

If you’re not too picky about textual authenticity and just want an excuse to celebrate the holiday spirit in a charming 70-minute theatre piece without seeing yet another rendition of A Christmas Carol (although the one now on Broadway is outstanding), this is as good as any I can suggest. You’ll definitely bask in the seasonal glow when the caroling cast sings the newer songs by Ms. Moore (“Take My Hand” is a keeper), Matthew Harris, and others, and the ones everybody knows (like “O Holy Night,” given glorious expression by Ms. Ewoldt and Mr. Jones).

At the end, Ms. Moore invites the audience to join in a singalong of a couple of songs whose lyrics are provided in a program insert. “Winter Wonderland” and “White Christmas” are on my printout, but I was happy to depart the Sunday matinee with light rain, not snow, to walk through. Snow makes for wonderful childhood memories in A Child’s Christmas in Wales; for the time being, I’m perfectly happy for it to remain there.