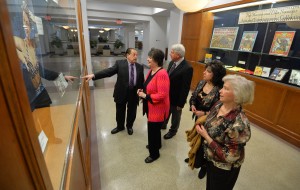 The University of Mississippi’s Archives and Special Collections is presenting a major exhibition of entertainment memorabilia spanning several decades and featuring items from three Mississippians who achieved fame as entertainment writers and critics.

The exhibit was unveiled Jan. 22, 2015, in the William Faulkner Room on the third floor of J.D. Williams Library. Due to popular demand, the exhibit’s run at the library has been extended until May 13.

“To be recognized in this exhibit with these men, both extraordinary Mississippians, is a great honor,” said Nassour, a Vicksburg native and UM graduate who resides in New York City.

Nassour began his generous donation of art and entertainment memorabilia to the university in 2000. In 2004, an official dedication took place, with the donation named the Mamie and Ellis Nassour Arts and Entertainment Collection, in memory of his parents.

“The Nassour Collection gives the university a new breadth of research material, stretching from Hollywood to the New York stage and back to the South,” said Charles Reagan Wilson, former director of the Center for the Study of Southern Culture. “The primary sources on Patsy Cline from Ellis’ two biographies, in particular, help support the center’s new emphasis on the study of Southern music.”

As a journalism student, Nassour was a contributor to The Daily Mississippian and chaired the Associated Student Body social affairs committee for two years. Working hand in hand with Dean of Students Tom Hines, he changed the caliber of on-campus entertainment with concerts by Peter, Paul and Mary; Johnny Cash and June Carter; Julie London and Bobby Troup; Peter Nero; and Al Hirt.

Nassour worked as a “campus runner” for a New York Times reporter during the UM integration crisis, which ultimately landed him a job at the newspaper, fulfilling a longtime ambition. He later became the director of artist relations for MCA Music/Universal Pictures, where he worked with Andrew Lloyd Webber, Tim Rice, Elton John, Neil Diamond, Brenda Lee and The Who.

“The relationships I developed led to some incredible experiences,” Nassour said. “Part of my re-education at the Times was working with reporters who covered World War II and the Korean War. Working with Loretta Lynn at MCA led to hilarious and poignant tales of her friendship with Patsy and, eventually, to my two biographies.”

The books are “Patsy Cline, An Intimate Portrait,” published in 1981, and the 1993 hardcover “Honky Tonk Angel: The Intimate Story of Patsy Cline” (St. Matin’s Press), still in print in a 2008 updated edition (Chicago Review Press). Nassour has adapted the latter into a stage musical. The entire spoken part of the hit revue “Always, Patsy Cline” is taken from four pages of Nassour’s biography.

From an early age, Nassour was interested in the performing arts and collecting materials related to the entertainment industry. His career gave him firsthand access to many of the collection’s valuable pieces, which include hundreds of visual and audio materials, vintage and contemporary film and theater posters, and signed Playbills, bound plays, biographies and autobiographies.

“One of the most important elements of the collection is that a huge portion of it is in use by faculty and students,” Nassour said.

“The libraries are thrilled to be able to offer a major exhibition highlighting the works and collections of three outstanding Mississippi entertainment writers and critics, the late Stark Young and Herschel Brickell and Ellis Nassour,” said Dr. Jennifer Ford, head of Special Collections for the Williams Library. “We want to invite the public to join us for this extraordinary exhibit.”

Hours for visitors to see this collection at the JD Williams Library are from 10 a.m. to 1 p.m. Mondays through Wednesdays and 8 a.m. to 5 p.m. Thursdays and Fridays.