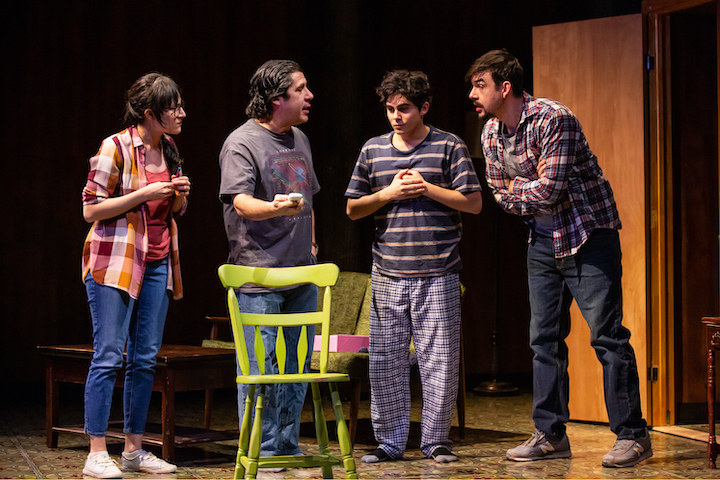 In this age of social distancing, it should come as no surprise that the most romantic and moving scene in any show on or off-Broadway—before the theaters were all closed due to the coronavirus outbreak—doesn’t even contain two people onstage. It’s a vignette between a man and a cell phone. There’s noting voyeuristic or bizarre, but it’s heartbreaking and tear-inducing. The play is 72 Miles to Go… Hilary Bettis’ detailed, honest and naturalistic drama of a family ripped apart by cruel immigration laws. The scene in question involves Billy, a Mexican-American preacher, celebrating his anniversary with his wife Anita, who has been deported. Their sole means of communications is via the phone. As Billy sits alone in his Arizona kitchen, Anita is speaking to him from her cramped quarters in a town on the other side of the border. They speak romantically, reminisce about their three children, and joke about his terrible cooking. Finally, Billy plays their favorite song and he waltzes with the cell phone. A simple, gut-wrenching attempt at intimacy in the midst of turmoil. Though 72 Miles is closed, this image sums up the current social zeitgeist even more than when it was playing at Roundabout’s Off-Broadway Laura Pels Theater. We are all separated now, craving for connection.

The 72 miles of the title refers to the relatively short distance separating Anita and her family, but they may as well be half a world away. Insurmountable barriers are placed between them by the American government. Bettis feelingly and economically chronicles the arduous sojourn of one family form 2008 to 2016 as the Dreamers Act holds out promise of reform and then the Trump administration threatens to snatch it away. (One imagines the family would face even worse hardships in the current nightmarish coronavirus pandemic.)

Small, heartbreaking moments mount between the separated couple and their three children as everyday events such as the first day of school, senior prom, graduation, birth of grandchildren, and Christmas take on added weight because of Anita’s absence. Jo Bonney’s direction carefully balances humor with pathos, as gears shift from almost sitcom-y schtick to heart-wrenching anguish, often within the same short scene. The daughter Eva’s comic encounters on prom night suddenly transform into a howl of despair when she tells her dad, “I need my mom for this shit.” Relaxed family get-togethers quickly morph into terror-filled nightmares when a police car passes outside.

The small cast creates a cohesive unit, full of the conflicts and tensions within any family but also dealing with the added stress of constantly being in danger of deportation. Trinity Sandoval’s Billy is caring, clumsy and compassionate. Jacqueline Guile’s Eva juggles rage, humor, protectiveness, and pride, particularly in a moving monologue delivered as Eva graduates at the top of her class and reveals to her classmates her mother’s tragic story. As younger son Aaron, Tyler Alvarez skillfully makes the transitions from nerdy kid into bellicose Marine. Bobby Moreno makes an equally detailed reverse journey as older son Christian, who is undocumented, convincingly changing from confident big brother to frightened refugee. Ironically, the center of the play is Maria Elena Ramirez’s Anita who remains an off-stage voice for most of the action. Though we only see her in the final scenes, her warm, loving presence is felt throughout.

72 Miles did not have an extended journey Off-Broadway. The original run was supposed to continue until May 3. It definitely deserves a longer future once theaters re-open.