Broadway is headed to the beach for the 2017-18 season. Two new musicals with seaside settings, The Spongebob Musical and Escape to Margaritaville, have just announced definite dates for the fall. The Spongebob Musical, based on Spongebob Squarepants, the popular Nickelodeon cartoon series, will wash up at the Palace Theatre for previews beginning Nov. 6 before it officially docks for a Dec. 4 opening. 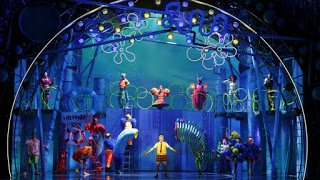 Broadway is headed to the beach for the 2017-18 season. Two new musicals with seaside settings, The Spongebob Musical and Escape to Margaritaville, have just announced definite dates for the fall. The Spongebob Musical, based on Spongebob Squarepants, the popular Nickelodeon cartoon series, will wash up at the Palace Theatre for previews beginning Nov. 6 before it officially docks for a Dec. 4 opening. The family-oriented musical premiered at Chicago’s Oriental Theater last year and features original songs by Steven Tyler and Joe Perry of Aerosmith, Sara Bareilles (Waitress), Cyndi Lauper (Kinky Boots), John Legend, The Flaming Lips, They Might Be Giants, and T.I. with an addition song by David Bowie and additional lyrics by Jonathan Coulton. Tina Landau (Superior Donuts, Bells Are Ringing) directs. Leads from the Chicago  run will repeat their performances including Ethan Slater as the titular sponge, Gavin Lee (Mary Poppins) as the sour octopus Squidward, Lilli Cooper (Spring Awakening, daughter of Tony winner Chuck Cooper) as Texas squirrel Sandy Cheeks, and Danny Skinner as dim-bulb starfish Patrick. BTW, Lauper is also set to do the score for Working Girl. a stage version of the 1988 film comedy.

Escape from Margaritaville is derived from the music of Jimmy Buffett (you know, he had that big hit with the tune about the outlawed shaker of salt), and is set for previews at the Marquis on Feb. 16 before a March 15 opening. Currently playing at the La Jolla Theatre and ready to tour New Orleans, Huston, and Chicago before its Broadway bow, the show’s plot concerns a laid-back bartender at a beachside resort falling in love with a urban-oriented tourist. Christopher Ashley (Come from Away) directs. Tom Kitt (Next to Normal) is music supervisor. Kitt will also serve in the same capacity for Jagged Little Pill, a musical based on Alanis Morrisette’s Grammy-winning output, which will have a reading starring Idina Menzel. The Wicked Tony winner is scheduled to star in Joshua Harmon’s Skintight Off-Broadway, so she is not set to appear in Pill’s planned April 2018 run at the American Repertory Theatre.

Other new musicals announced for the new season include Disney’s Frozen and a transfer of the Off-Broadway The Band’s Visit which just won three Drama Desk Awards for David Cromer’s direction (in a tie with Rachel Chavkin for Natasha, PIerre, and the Great Comet of 1812), and David Yazbeck’s music and lyrics as well as the New York Drama Critics Circle Award for Best Musical.

As usual revivals are a favorite choice with new stagings of Carousel, My Fair Lady, and Once on This Island on the launching pad. Prince of Broadway is not technically a revival, but a revue of the moments from shows directed and produced by 20-time Tony winner Harold Prince from West Side Story to Phantom of the Opera.

Progressive filmmaker and gadfly Michael Moore is set to open in a one-man show The Terms of My Surrender in which he vows to take down Donald Trump, but maybe the Orange Cheeto will be out of office by the time it opens in August.

The most highly anticipated new straight play is Harry Potter and the Cursed Child, the hit two-part continuation of JK Rowling’s sorcery saga, still playing in London. Other new nonmusicals announced for Broadway are the current adaptation of 1984 (opening June 22), Pulitzer Prize winner Ayad Akhtar’s Junk, Pulitzer and Tony winner Tracey Letts’ The Minutes, and British import Farinelli and the King by Claire van Kampen to star her husband Oscar and Tony winner Mark Rylance. Play revivals include Marvin’s Room, Time and the Conways, An Enemy of the People (in a new adaptation by Brandon Jacobs-Jenkins), M. Butterfly, Edward Albee’s Three Tall Women (starring Glenda Jackson and Laurie Metcalf), and Kenneth Lonergan’s Lobby Hero which will launch the Second Stage’s new Broadway home at the Helen Hayes. The next show in Second Stage’s new B’way venue will be Young Jean Lee’s Straight White Men, but that show which previously played Off-Broadway will not open until next July when we’ll be looking ahead to 2018-19.

Here is a breakdown of the upcoming 2017-18 Broadway season with a few Off-Broadway openings thrown in.